[Editor note, bumping this to show, rather than tell why this site is waaaaay better than Kravitz gives us credit for -Shake] 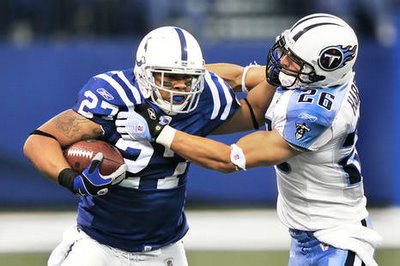 The other day, I had the chance to ask Colts running back Lance Ball a few questions about last year's breakout game for him (against the Titans) and the upcoming 2009 season. Many thanks to Lance for taking the time for the interview, and to Jeff Weiner for setting it up.

BigBlueShoe: Your "coming out party," so to speak, was the last game of the 2008 regular season when you ran for 83 yards on 13 carries against the Tennessee Titans. Just prior to that game, you were elevated from the practice squad. So, in the span of less than a week, you went from practice squad member to leading rusher in a regular season game. Was that week, leading up to the game, overwhelming? Did you have to cram the playbook? Or was it business as usual?

Lance Ball: Actually it was not as overwhelming as you may think. I mean yes, I was getting kind of nervous leading up to the game because it was going to be the first game I played in as a Colt. But I am a pretty cool and relax dude so I was in the right state of mind. While on the practice squad I was still studying the playbook hard. I had an idea of what was going to be called that game. I am still learning the playbook till this day..being with the Colts the playbook is so extensive. A practice squad player still has the responsibility to learn the playbook. At anytime you can be called up to be put on the active roster.

BBS: What was it like playing in a live NFL game after spending much of the season on the practice squad for the Rams and Colts?

LB: Well I played in the four preseason games with the Rams and was very productive. So the game experience was not a shock. I knew what to expect an how to handle myself on the field.

BBS: The Colts seem to think highly of you, re-signing you to return for the 2009 season. What element of your game have you worked on this off-season to improve yourself as a running back in the Colts system?

LB: Becoming more familiar with the offensive terminology. Also just getting stronger and faster. You can always get better and improve. I try to just work my hardest in the weight room and during drills to increase my performance on the field.

BBS: [Note: Prior to this question, Mudd and Moore had not officially retired yet] Are you, or other Colts players, worried about the possible retirement of offensive coordinator Tom Moore and offensive line coach Howard Mudd?

LB: Both of them are great coaches and coordinators. They will be truly missed if the leave, but hey its the NFL and you have to be ready for things like this to happen you know.

BBS: You were on the active roster for Tony Dungy's last game at Lucas Oil Stadium. What was it like playing for him? Did he say anything to you after your performance against the Titans?

LB: Tony Dungy is one of the best coaches that I ever been around. Not only was he a great coach , but he was like a second father figure to the players. He never yelled at you when you messed up or changed his attitude towards you if he was having a bad day. Coach treated people how they wanted to be treated. You had to respect him when playing for him. He gave you that presence. Coach Dungy recognized me as being one of the top performers that game, but it was kinda of expected. So we just kept it moving and prepared for the wild card game.

BBS: Just so my readers know just how big you are, I'm 6'4, 200 pounds. You, Mr. Ball, are listed at 5'9, 220 pounds, and I don't think that extra 20 pounds or so is fat! You are "small" when it comes to people thinking about the standard height of a running back, but you are a load to tackle at 220 pounds. Yet, when I watch YouTube videos of your play at Maryland, you've got speed! Is your running style more to plow through tacklers, Jerome Bettis-style? Or, you you prefer to try and shake people?

LB: Yea I think now I am about 217ish, but I like to mix my game up. Sometimes, I may try and run you over and sometimes I may shake and bake you. You never know what you are going to get. But one important thing about my style is that I run north and south, the quickest way to positive yardage, first downs and the end-zone!

LB: I think just the whole playbook in general. It is filled with a lot of information that 2 -3 year old veterans still have problems with. Can you catch my drift?

BBS: Were you concerned when you saw the Colts draft Donald Brown, RB out of UConn, with their first round pick? And by "concerned" I mean, did you feel it could limit your opportunity to start or play in more regular season games?

LB: Yea its always tough when the running back position gets even more competitive. But thats the name of the game and to be a great football player you have to be able to compete. So all I can do is to just go out there and play football. The rest will take care of itself.

BBS: What skills do you bring to the Colts offense? Do you bring a more physical running style? Good pass blocking? Good run blocking?

LB: I believe overall I can do everything quite well. I love to catch the ball and run with it, as well as be a physical runner and make defenders pay for attempting to tackle me. It should be interesting this year.

BBS: And finally, are you living a dream right now, playing in the NFL? What's it like to play for a team like the Colts, who often give underrated players a shot at making it?

LB: Its such a blessing playing with the Colts. There is a great fan base and supporters in Indianapolis. It is amazing to play at Lucas Oil and I can't wait for the season to begin! Thanks for giving me the opportunity to answer your questions and thanks for taking the time to read this fans!

Hope you enjoyed our little talk with Lance Ball. I know many here, and many Maryland fans, are hoping Lance is part of this team going into 2009. His progress is something we will watch closely at Training Camp this August.