Share All sharing options for: Jim Finn is "The Man!"

Does anybody here remember Jim Finn? He was drafted as "Mr. Irrelevant."  You know he played fullback for the Colts from 2000-2002. He fumbled a lot, but he played hard. I remember the 2002 game against the Titans when the Colts were so hurt at running back that they had to start Jim Finn at HB. He had like 2 carries and 2 fumbles before he got knocked out of the game. In fact, in the picture to the right here he is about ready to get hit, hurt and fumble all at once. It was sad, but I always loved Jim Finn.

Anyways, the other day I was searching on Wikipedia because I am a Wikipedia addict and I was like, "I wonder what Jim Finn is up to these days." Yes I know I don't have a life so you don't need to remind me of that. So I was reading that Jim Finn was retired from football and he recently married actress Rosa Blasi. This name sounded familiar so I did a Google image search of her... 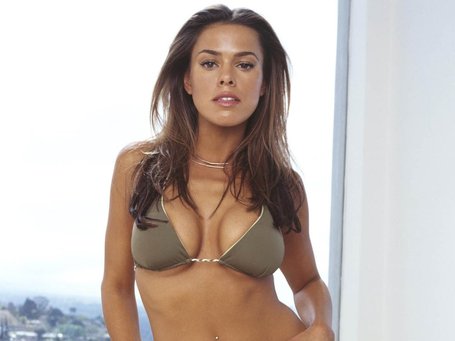 Oh. My. God! That is one amazing woman! Jim Finn truly is "The Man!" Pretty damn good for a "Mr. Irrelevant." I take back everything I said about your numerous fumbles Mr. Finn!

Also, its worth mentioning that Jim and Rosa welcome their first child together in September 2004. Congrats to both of them! Once a Colt, always a Colt.

Oh and for those of you who don't remember Jim Finn well at least you can appreciate the picture of his wife that I put up here!