The news is all over the place about the Colts adding new coaches, its seems, left and right. Hell, there is a radio interview with Bill Polian himself saying Christensen is the OC and Metzelaars runs the o-line.  Yet, there is no announcement on Colts.com about it. Why? I decided to go back and re-listen to the interview. Sure enough, when asked about the new coaching responsibilities, Polian chose his words very, VERY carefully:

We promoted Clyde Christensen to Assistant Head Coach at the outset of February. He'll take over the [offensive] coordinator's duties. Pete Metzelaars has been our Assistant Offensive Line Coach for the past three years and he'll take over the full-time line duties. Jim [Irsay] is, right now, deciding how he wants to structure from there.

That is very interesting wording there, folks. My take? Christensen and Metzelaars are doing the jobs Moore and Mudd did, respectively, but do not have the TITLES of OC and line coach. One reason they might not have these titles is Irsay is waiting until after June to see what Mudd and Moore do. Do they stay retired? Do they want to return as assistants again? As consultants?

Again, no one is telling me this. This is just me putting two-and-two together.

If the titled positions of Offensive Coordinator and Offensive Line Coach are not filled, that means the Colts could be keeping them open if and when Moore and Mudd return. Now, if they don't return, the Colts seem to have "back-up."

This is where we shift into the hard news:

The Colts have hired two new coaching interns. Both are former players in the NFL, and one is a legend among the Green Bay Packers faithful. Ron Johnson will work with the wide receivers with Assistant Head Coach-Wide Receivers Coach- "He Who Is Doing Offensive Coordinator Stuff But Isn't The Offensive Coordinator" Coach Clyde Christensen. Johnson was a WR for the Baltimore Ravens from 2002-2003, and played in the defunct Arena Football League.

Reader colts9318rock has a FanPost about the new here.

The other new coach is former Packers center Frank Winters. Frank was Brett Favre's center the day Brett made his first start of his pro career back in 1992. He helped Green Bay win the Super Bowl in 1996. Winters will work with Metzelaars and the offensive line. 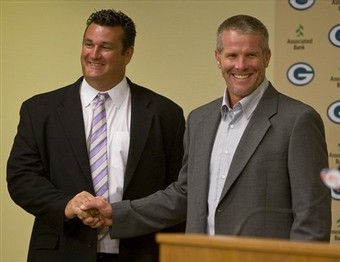 Frank Winters, left, is now a coaching intern for the Colts.

Both Johnson and Winters seem to be, essentially, interns. They did this with Metzelaars five years ago, bringing him in as a coaching intern to work with a mentor: Howard Mudd. It's a smart practice, if you think about it. It allows the Colts the ability to bring in quality coaching prospects and groom them to be fulltime coaches one day. If Mudd and Moore stay retired, logically the Colts could then give Christensen and Metzelaars the Offensive Coordinator and Offensive Line Coach titles, respectively. This would allow Johnson to become the new WRs Coach and Winters to take Metzelaars current job as Assistant O-Line Coach.

Again, this is mostly speculation on my part.

The only facts we have are the the Colts, currently, do not have anyone employed with the title "Offensive Line Coach" and "Offensive Coordinator." We also know that two news coaches were hired to work with Clyde Christensen and Pete Metzelaars. Oh, and Tom Moore and Howard Mudd are, indeed, retired.

Likely, all this will shake out and settle after June. It's then when we shall see if Howard Mudd and Tom Moore return. But that's just speculation on my part.