Share All sharing options for: Colts fans ecstatic that Tom Moore and Howard Mudd are returning to the Colts as consultants

Thanks to AussieColtsFan for posting a solid FanPost, letting us know that Jim Irsay has stated (via Clark Judge of CBS Sports) that Howard Mudd and Tom Moore are indeed returning to the Colts in 2009 as consultants. This news explains why Clyde Christensen and Pete Metzelaars will "assume new duties," but not have the titles of Offensive Coordinator and Offensive Line Coach.

Also, just to clarify, Ron Johnson and Frank Winters are not new "coaches." They are "coaching interns." They are, basically, being shown the ropes on what it is like to coach in the pros. So, their additions to the team would have likely happened anyway if Mudd and Moore had not retired.

We don't know yet when Mudd and Moore will return to the Colts. The Indy Star's Mike Chappell tells us they cannot return until November, but that seems a bit odd. What the hell are these guys going to do until November? Do they really have to wait until then? Seems odd and silly. We'll hold out for more info on this.

With Mudd and Moore returning, it pretty much blows to pieces the silly and colossally hack-tastic theory that our old "buddy" Mike Florio started floating around out there. I won't link to the story because Florio is a turd, and I don't make a habit of linking to tabloid stupidity. I'll simply link to John Oehser, who seems to find Mike about as annoying as I do:

This is just a bit silly.

There are some interesting names on the staffs for football junkies, but the interesting aspect to Colts fans was the following paragraph:

I’m not denigrating the guys on the UFL staff. There are some good coaches on the lists, but to speculate that Mudd and Moore — at age 67 and 70, respectively — would join the UFL seems a bit of a reach. I still can’t get past the idea that Moore and Mudd will return to the Colts as consultants next season, but if they don’t, I can’t see either coaching.

Come on, John! Don't pass up a prime opportunity to do what so many of us on the web love to do: Make fun of Mike Florio!

Don't pass up a chance to make fun of his made-up stories, his posts that are blantant advertisements for Sprint cell phones, or the fact that he shoves a broom pole up his butt prior to recording his crappy video segments.

Oh well. One day, my immaturity will rub off on John. One day.

Of course, as John suggests, everything Florio barfed out on his site about Mudd and Moore was total horse dung. I knew it. You knew it. Pretty much anyone who knows the situation knew it. The only ones who didn't were Florio, his "sources," and the mindless drones that follow him.

By the way, if you Google "Mike Florio idiot," you get a few of my anti-Florio stories at the top of the list. Folks, we have arrived! 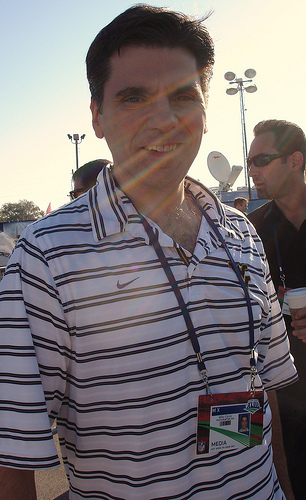 Yes, despite the fact that he makes stuff up on a routine basis, that is an NFL Press Pass around Mike's neck... for the Super Bowl no less. Oh, and Mike does indeed blog under his own name. I guess that makes him"accountable," right Bob?