Share All sharing options for: The Bob Sanders Beatdown Defense is Dead

BSBD (or, the Bob Sanders Beatdown Defense) was a term coined on this site by our very own BigBlueShoe. In the coaching world it is known simply as "Cover 3." Now, I don't want to go into too many details, but essentially Cover 3 is when the corners give a big cushion, one safety plays deep center-field, and the other safety (Bob Sanders in this case) plays in the box to stop the run. Hence, the title "Bob Sanders Beatdown Defense." 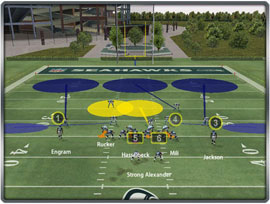 Now, the Colts started running this defense to stop teams like the Tennessee Titans from running their "keep away" offense in which they try to shorten the game by running the ball over and over and over again. Cover 3 lets you play 8 in the box without surrendering the big pass play because there are three guys deep.  This arrangement worked against teams like the Titans, but ultimately it was a failure in the long run. This is because the BSBD defense was a creative stop gap measure brought about because the front 7 of the Colts just hasn't been very good against the run. They needed Bob's help to do their job for them.

The major problems with the BSBD defense is that first it compromises the health of Bob Sanders. Now Bob is one tough guy, but at 5'8 he should not be used as a 4th LB because the other three LB's can't do their jobs. It turns him into a human kamikaze, leading to nagging injuries. It's reckless of the Colts to expect him to take on a 315lb offensive linemen play after play. They have to be smarter about how they use the Bobzilla.

The other issue with BSBD is that it assumes your opponent can't make plays in the short passing game. Cover 3 essentially dares you to throw curl routes all day  and make plays in the short passing game. It works against Vince Young, but against guys like Phillip Rivers its ineffective. Good QB's can make those throws and chip away at you. They have the patience, talent, and experience to do that. As creative as the BSBD is, the Colts have to find ways to win with their front 7. No amount of scheming can change that.

The Colts coaching staff recognizes this during the off-season. That is why there has been a shift in defensive philosophy. The LB's and DT's have gotten bigger and more athletic  through the draft and free agency. I have always been a big fan of Dungy's defensive approach, but I think our personel has been way too undersized to play against the style other teams play us now. They know they can't throw deep against the Colts, but they do know they can wear them down if they stay patient. They have adjusted and now the Colts need to be flexible enough to tweak how they do things. Ultimately I feel Caldwell is still going to run a Cover 2 defense, but hopefully the front 7 will be strong enough to not have to rely on Bob Sanders for additional support.