Know Your Colts History: It's Back

Share All sharing options for: Know Your Colts History: It's Back

So it's been a while since I've been around these parts.

As most of you know, when I'm not looking for Ben Utecht's music on Youtube, I'm writing at Bullets Forever.  When the head writer over there decided he needed to take a little hiatus, I took over head writing duties over there, chronicling the back half of the worst season in franchise history, as well as the build-up of excitement to Tuesday night's Draft Lottery.  Of course, that ended up being a massive gut punch when the Wizards, who had the 2nd worst record in the NBA, received the 5th pick.  I'm still not quite sure who will replace Blake Griffin in my hardwood fantasies yet.

Blogging about the Wizards was depressing at times (except when they beat Indiana of course...sorry), but going through those times is what separates the true fans from the casual ones; and I have no intentions of being a casual fan.  Since I wanted to make sure I gave all the readers the best of my efforts, I decided I'd take a little hiatus from KYCH until our main guy came back.

Thankfully, he's back now which opens up more time for my random thoughts on the Colts.  It's been a little over three months since I last checked in and a lot has happened in that time.  I certainly can't get to everything that's transpired in the last few months, but I'll try to cover some of the big storylines over the last few months.

Does the drafting of Donald Brown spell the end for Joseph Addai?  It could, but let's not jump to any conclusions yet.  In case you haven't noticed, the NFL is becoming more and more of a multi-back league.  Unlike the early part of the decade when guys like Edgerrin James, Marshall Faulk, Jamal Lewis and Priest Holmes were one-man workhorses who could carry their teams to the playoffs by themselves, now you have to have a full stable if you want to compete.  Look at the Giants, look at the Titans, look at the Steelers, look at the Panthers, look at a lot of the successful teams in the NFL.  They all have two or more good running backs and most of them used multiple high draft picks to get them.

Of course, Addai has to step up his game from last season, no one is going to argue that.  But the offensive line needs to step up its game as well, or it won't matter how many good running backs the team has at their disposal.

Is this whole entry going to be set up like this, where you ask a question in bold and then answer it with unbolded text?  Yep.

How long is it until Pat McAfee becomes the next internet sensation? I'm guessinng by week 3 of the preseason.  Maybe sooner if he starts cage fighting with Jim Sorgi on the sidelines.

How will the retirements of Tom Moore and Howard Mudd affect Peyton Manning?  Peyton is a creature of habit.  We saw this at work early last season when his knee kept him from preparing the way he wanted to and it hurt his performance on the field.  Losing the only offensive coordinator that he's ever worked with in the NFL, as well as the only offensive line coach that he's ever worked with could really throw him out of his comfort zone and affect his play next season.

Then again, the other thing that we have to remember in addition to the fact that Peyton is a creature of habit is that he's secretly been running everything from the playcalling to concession sales for a good while now.  I don't see this setting him back that much.

[EDITOR'S NOTE: Please excuse JakeTheSnake. He's been so focused on the Wizards that he didn't know that Tom Moore and Howard Mudd did not really "retire." They will return next season, likely doing the same job they did before, but as "consultants." --BBS]

Is fart jokes all you write about? This question goes back to BigBlueShoe's post about who does what here at Stampede Blue.  BBS said I make fart jokes, which couldn't be further from the truth.  Like anyone, I enjoy a good fart joke, but if you search for the word "fart" on the site, you'll notice that only one writer appears in all of the entries, and it's not me.  I think someone is in denial.

Will Marvin Harrison get a job? On one hand it would be great because I don't think I'd be alone in saying that I'm not a fan of legendary players closing their careers with teams that they didn't start with.  Johnny Unitas with the Chargers, Joe Montana with the Chiefs, and Jerry Rice with the Seahawks all come to mind.

On the other hand, as someone's that watched Marvin play since I was 8 years old, it hurts to see that the guy can't even get a job offer.  He's nowhere near the level he was at 5 years ago, but he still had 60 catches last year.  That's good enough to get a job as a #3 receiver isn't it?  I know Harrison isn't as sexy as some of the other players out there on the market, but there's bound to be a team that loses a receiver during the preseason that needs someone who can come in on short notice and contribute.  I think Marvin would be very capable of filling that role for some team this season.

The Boston Police Department will report any and all zombie attacks that come there way, should we be concerned?  No, but I get the feeling they'll have a lot of attacks to report on November 15th. 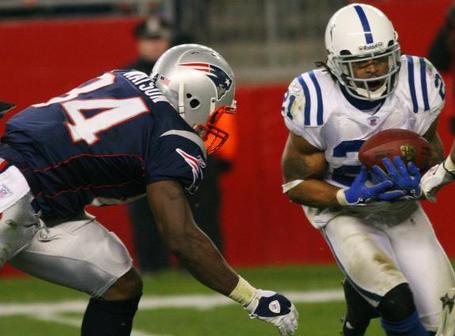