This will be a heated battle, mostly because of how many people are competing for it.  I assume that Marlin Jackson and Kelvin Hayden will be the starting cornerbacks, but there are many cornerbacks behind them competing for a spot that all of them could easily win.  Tim Jennings, TJ Rushing, Michael Coe, Dante Hughes and third round pick Jerraud Powers will all fight for that one job.  Not all of them will make the roster, so this battle isn't only for nickelback, it's for a roster spot.  I have my concerns for each of these guys, but I also think each of them could be superb.  The 2008 Colts had one of the best secondaries in recent history, and all of these guys being healthy will only make it better. 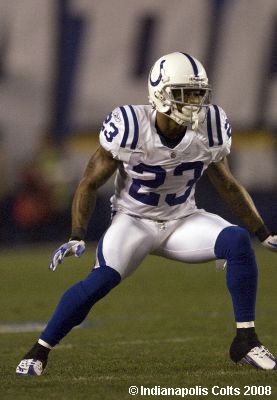 Positives: Has a shorter than ideal frame, but shows very good muscle tone, good bubble and thick thighs and calves...Plays with good field awareness, showing a very good feel for anticipating routes, whether playing in the zone or man coverage...Shows very loose hips to turn out of his backpedal smoothly and close on the ball...Has good hand usage to maintain relationship with receivers through their route progression...Shows the range, burst and second gear to make plays on the perimeter...Has natural hands for the interception and times his leaps well to compete for jump balls...Will extend and catch away from the body's frame...Has the balance and pad level to gain leverage and uses his hands effectively to keep blockers from attacking his legs when working near trash...Has good knee bend and arm extension to stay low in his pads, wrap and secure as a tackler... Hard worker in the weight room and a good mentor for the younger players...Vocal leader who shows consistent effort in practices and games.

Negatives: Has a small frame with no more room for additional growth...Shows good aggression vs. the run, but is best working along the perimeter, as he does not have the bulk to shed and slip past blocks working through trash...Has been a good program performer the last two years, but does have a 2003 off-field issue that could be a concern...Shows good field instincts, but his low early Wonderlic score (9/28) indicates he could struggle some with a complicated defensive scheme...Times his leaps well, but a lack of height causes problems competing with the taller receivers for the jump ball on deep routes (also limited by a 29 3/4-inch arm length)...Has the speed to recover, but will sometimes get so confident in his closing burst that he will lose relationship with receivers (needs to maintain position tighter at times).

I am not a big fan of the way Jennings plays, mostly because of his size.  However, he did progress nicely against the run as the season went on.  The main problem was that he was caught out of position a few times.  Of course, he ended up in bad matchups.  I think Jennings showed improvement, but his ceiling is low compared to Rushing and Hughes.  He started 12 games last year, but I don't know if I would want him in such an important role next year, especially with Hughes, Coe and Rushing healthy. 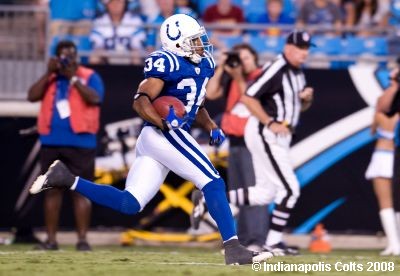 If there was a TJ Rushing fan club, I would be its president.  I am a huge supporter of Rushing.  To me, he seems like the cornerback that the Colts need right now.  Coming off of injury or not, I like the way he plays.  The Raiders game in 2007 is what I like to look at when I evaluate Rushing.  Even without the punt return for a touchdown, he played a physical game and actually got the ball carrier down on first contact (!).  The secondary needs someone like Rushing in a situational role. 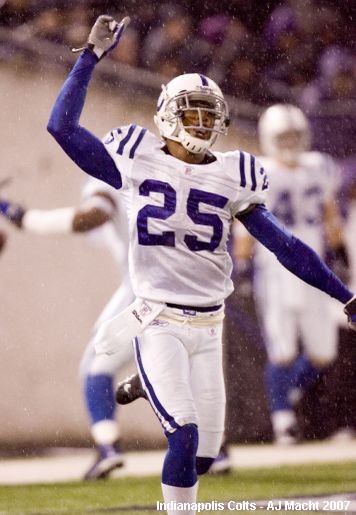 I honestly have not seen enough of Coe to make a decision.  I know that he has the chance to be a great special teamer, and he already has a blocked punt in his short career, but as a corner, I don't know.  This training camp and preseason will be a great time to evaluate Coe.  Right now, I can't count him out as nickel back, but I will be shocked if he wins it outright. 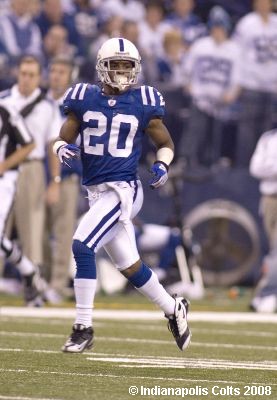 "Fast corners: Speed is everything at cornerback. Seven of the top nine cornerbacks in this draft run in the 4.3s with Chris Houston of Arkansas being the best at 4.32. The best debate is the one-two punch of Leon Hall of Michigan and Darrelle Revis of Pitt. Both run in the 4.3s. Hall is the better Cover 2 cornerback. Revis is the best pure man coverage guy. Both should go in the top 15. The bargain of the group could be Daymeion Hughes of Cal. He’s a read-and-react cornerback but doesn’t run very fast. Hughes was clocked at 4.65. Nathan Vasher of Texas ran a bad 40 coming out of school, but he ended up starting for the Bears and going to a Pro Bowl."

The cornerback formerly known as Daymeion seems to be a great fit.  He is perfect for a Tampa-2 system where his speed won't be exploited.  All in all, he had a good year last year on special teams with ten tackles and had a pick against the Bengals.  I think he could end up with the job, although being a third round pick I'm sure his legs will get cut off riding Drop Zone at King's Island or something.  I like Hughes and I would be happy to see him as the nickelback.  It's improbable, but not impossible. 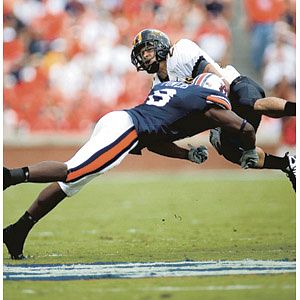 Positives: Short, but has a legitimate NFL build. ... At least adequate deep speed. ... Flashes an aggressive initial hand punch at the line of scrimmage. ... Good hip swivel to turn and run with receivers. ... Good agility and quickness out of his breaks to close on the ball. ... Peeks back at the quarterback and is willing to gamble. ... Can adjust his body in space to make the athletic interception. ... Rides receivers throughout the route and isn't intimidated by bigger receivers. ... Reliable open-field tackler who flashes some pop. ... Good agility to avoid blocks.


Negatives: Might be too short to handle working on the outside. ... Good open-field tackler, who flashes some pop, but his physicality hasn't translated into forced fumbles. ... Can be too aggressive. ... Has a tendency to bite on the fake and lacks the elite burst to recover when beaten initially. ... Fought a nagging hamstring pull as a junior.

At first I didn't like the Powers pick.  I wanted Duke Robinson or Jamon Meredith, but after I while I grew to like Powers.  He is a good tackler and plays like Bob Sanders where he sacrifices his body to make the play.  He seems to have it all.  My gut says that he will break the 3rd round pick curse if Hughes and Wheeler don't do it first.  I think he will play his rookie year as a special teamer, but he could be the nickelback or even starting cornerback of the future.

Whoever wins this competition will have to be really good.  Whether it is a player that I'm not fond of like Tim Jennings or a player that I like a lot like Rushing I know it will be the right choice.  As long as Rushing and Coe are healthy, this will be the best competition because there will be no worries about a lack of talent.  Personally, I want to see Rushing or Hughes win it, but Jennings may retain his spot.  I just don't think Jennings is the type of corner the Colts need.  At first I thought he could be a good tackler, but he is just too small to make open field tackles, something I want all of the corners to be able to do.

Odds on Being Nickelback