Share All sharing options for: 2009 Colts Rookie Mini-Camp: Can you "Fili" the love for the DTs?

Today is the last day of Colts Rookie Mini-Camp, and if you have followed coverage of the camp (what little you can get) you see that the focus of much of the coverage is not necessarily first round pick Donald Brown (pictured right). Brown is not getting ignored or anything, but the guy who really keeps popping up in all the mini-camp coverage is second round pick Fili Moala, DT out of USC.

Ed Thompson of ColtPower.com conducted an excellent interview with Fili as camp ended yesterday. The interview provided us with some quotes that are helping warm Colts fans to the USC rookie:

Thompson: It's got to be exciting for you, knowing that no matter which defensive tackle spot you end up playing, you'll either have Dwight Freeney or Robert Mathis next to you.

Moala: Yeah, those guys can rush the passer. The Colts were one team that we watched a lot of film on at USC. Those guys get up the field, they have multiple pass-rush moves, and they're savvy veterans. I'm sure that I'll have nothing but good times there and will learn a lot of the tricks of the trade.

Moala: I want the USC fans to know how appreciative I am of all the years they cheered me and my teammates on. And to the Colts fans, here's to the future. I'm only going to get better, and I'm determined to be the best and to show everyone that I'm one of the elite tackles in this draft. I know it's going to take years, but I'm going to come in and be as productive as I can be, knowing that I'm going to continue to rise. And let's go win some Super Bowls!

I know this kid hasn't played a lick of pro ball, and I know he will struggle when he goes up against tough, interior offensive linemen, but regardless... I like him already. It's hard not to when you see quotes like that or when you watch Jeffery Gorman's interview with him on Colts.com. It's funny to see his reaction when he talks about line coach John Teerlick. I'm willing to bet Teerlick did a "happy man" dance when he saw Indy drafted Moala. And, if anyone recorded this theoretical happy dance, YouTube it already!

Indeed, the interior of the Colts defensive line is a big focus this offseason, especially the rookies. The Colts also drafted 4th round pick Terrance Taylor from Michigan, and while Fili might be getting all the love from fans and press, Taylor is just as important (if not more important) to the success of this team.

Since Ed Johnson was kicked off the team, the Colts have desperately searched for a quality nose tackle for their Tampa 2 scheme. They tried to trade for Buffalo's John McCargo last season, but McCargo's nagging back injury snuffed the deal. They then signed Antonio "Mookie" Johnson off Tennessee's practice squad, and while Mookie played very well overall in 2008, the kid was only on the team two weeks before getting thrown into the starting line-up. That's not a lot of time to learn a new defense, get comfortable with teammates, and start producing. This off-season, players like Mookie Johnson (who was signed for two years) will have time to learn the defense, get conditioned, and get comfortable playing for the Colts. In addition to that, rookies like Terrance Taylor are now in the fold, and Taylor knows the kind of role Indy is asking him to play:

At 319 pounds, Taylor definitely fills one of the team's needs. He's currently the biggest defender on the roster.

"It makes me feel good," Taylor said. "It's always good to go to a place where they need you. You're not just there because they had another pick. They've got a lot of great veterans and leaders I can learn from."

Like Moala, he didn't expect to be drafted by the Colts.

"It was a surprise to me," Taylor said. "They had called me information-wise, but other than that, it was a surprise that I was coming here. They needed some guys to stop the run, and I'm the guy to do that."

Also thrown into the mix are rookie free agents Pat Kuntz (DT, Notre Dame) and Adrian Grady (DT, Louisville). I have no idea how Kuntz and his 285 pound frame will factor into the Colts d-line rotation, but I almost don't care. The dude is friggin' hilarious. He can belch the alphabet, and did so on Indy's 1070 The Fan a few days ago. Listen to it. It's pretty friggin' funny. 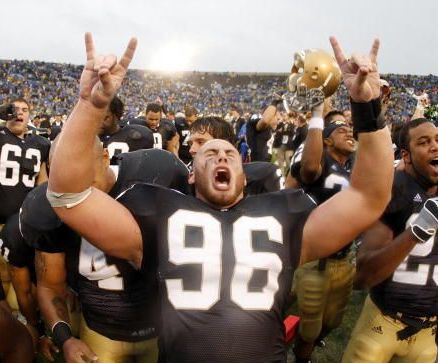 This man will burp the alphabet on cue. So yep, he's a keeper!

Belching aside, Kuntz could play three technique at the DT spot, or the Colts could use him as a replacement for DE Josh Thomas. Thomas, a hard-working, sturdy run defender at the DE spot, has not been re-signed. At 6'5, 271 pounds, Thomas added a great deal of size to Indy's edge. When team's went power run against the Colts, Thomas was one of the few line defenders who could snuff out the run. Kuntz is 6'3, 285 pounds and might be able to fill the roll Thomas once held. If not, the Colts should still keep Kuntz on the payroll so he can burp the alphabet over the loud-speakers at "The Lube" on gameday.

Adrian Grady is the mystery player to me. Like Eric Foster last year, I don't know much about Grady (watched zero Louisville games in 2008). However, like Foster, Grady might have been a bit of a steal:

Grady, meanwhile, has been called a "diamond in the rough" by NFL scouts after posting good numbers for the Cardinals (41 tackles, nine tackles for loss, two sacks) as a senior last fall.

At 6'2, 305 pounds, Grady fits the bill as a Tampa-2 tackle. But, which kind of tackle? Is he a three tech or a NT? Or both? Staying healthy was Grady's biggest problem at Louisville. He did stay healthy his senior season and really broke out. Scouting reports say he is quick and can push the pile. He's also active and never quits on plays. His negatives are he is not great at the point of attack, and has limited pass rushing moves. But, he shows a lot of potential, and unlike Foster (who played admirably at NT last year only weighing 270 pounds), Grady has the size and frame to play NT. 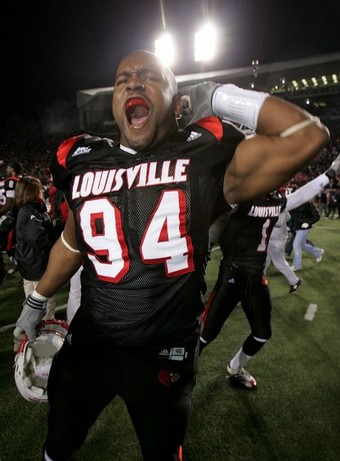 Adrian Grady wants to hear you scream his name!

So, as the rookie mini-camp winds down, and the June team mini-camp waits on the horizon, the Colts are looking at having Fili Moala, Mookie Johnson, Terrance Taylor, Eric Foster, Keyunta Dawson, Adrian Grady, Daniel Muir, and Pat Kuntz as their defensive tackles. I think it is safe to say the Colts took their DT depth issues VERY seriously this off-season, and brought in some high quality, high character guys who will shore up the interior of this defense. Start getting excited...