So after reading about Matt Stafford and how he has already had a few stumbles in training camp (which is expected), it got me to thinking about how often quarterbacks drafted in the first round really succeed.

Of course we all know that it is a rare occurrence that a quarterback comes along and completely destroy opposing defenses, but the temptation to draft quarterback with the talent to do just that is something that many GMs cannot pass up.

Drafting a quarterback in the first round is a bit like gambling. We all compare quarterbacks to the next coming of Dan Marino or Peyton Manning, but most of the time, teams end up with someone more similar to Ryan Leaf or Heath Shuler.

So what's the deal? Year after year, why do people continually invest 20+ million dollars in guaranteed money to someone who will not likely be on the team five years from now?

In this article, I will take a look at the odds of drafting a successful quarterback in the first round. 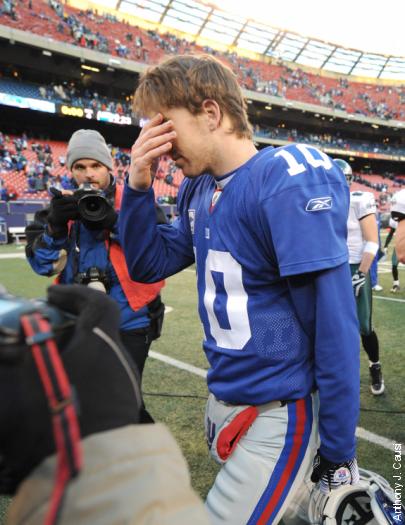 Eli knows what it's like to feel the pressure. Luckily, he was able to overcome his misfortunes and deal with the stress of being a first round pick.

Since the 1970 AFL-NFL Merger, there have been 78 quarterbacks drafted in the first round.

Of these 78 QBs, there are several Hall of Fame candidates such as Dan Marino, John Elway, Jim Kelly, and Phil Simms.  But amongst the short line of great QBs is a lonnnnng list of people that either never lived up to their potential (Kerry Collins) and players that just plain stunk (Ryan Leaf).

This is the complete list of QBs drafted in round one from 1970 to 2009 along with team they were drafted by, career completion percentage, QB rating, TD/INT stats, and pro-bowls and Super Bowls won.  (Just so you know, I did not give them the super bowl win if they were a backup).  I also went through and analyzed them and decided whether they were considered a bust or not. I think I was fairly honest about whether or not they are considered a bust, only labeling them that if they never really won consistently or didn't stay with the team for longer than about four or five years.

I also took into consideration many other factors, and I'm sure there may be some disagreement amongst players who are either labeled busts or are not labeled busts, but for the general idea of the article, we are looking merely at the statistics, not individual performances.

After analyzing this list, if you do the math, you come up with a success rate of about 35%. THIRTY-FIVE PERCENT!  I don't know about you, but if someone told me that there was a 35% chance my $20 million dollars (or more) would be thrown in the garbage, I think I'd keep it in my pocket.  Of course, we should look at the amount of success quarterbacks selected in the later rounds have before we can do a valid comparison of how much of a bargain it would be.

But the truth is that some GMs are willing to put their money in the pot and bet it all in case he does turn into the next Peyton Manning. Hey, it worked for Bill Polian right?

1. Bengals - The Bengals have wasted selected a QB in the first round of the draft FOUR times since 1970, with only Carson Palmer being worth the investment.

2. Lions - All three first round QBs have floundered in Detroit.  Let's hope Stafford can change their luck.