Share All sharing options for: Colts re-sign DT Ed Johnson seven months after kicking him off the team

This absolutely HUGE news. John Oehser confirms, and Colts.com has posted, that DT Ed Johnson has re-signed with the Colts nearly seven months after Bill Polian and then-coach Tony Dungy booted him off the team.

Two days after the opening day loss to the Chicago Bears on Sunday Night Football, Johnson was pulled over for speeding in Hamilton County, IN, north of Indianapolis. Johnson was charged for that offense and for possession of marijuana found in his vehicle. The next day, the Colts cut him from the active roster.

The Colts and Johnson had a zero tolerance policy in place due to Johnson's checkered past at Penn State. The arrest in Hamilton County violated that policy, and unlike many other sports teams that often talk the tough talk but fail to back it up, the Colts backed theirs up. Johnson was out of football throughout the remainder of the 2008 season. No team signed him during free agency this off-season.

Now, the Colts are giving him another chance.

"We are giving Ed Johnson another opportunity to play for the Indianapolis Colts. We dismissed Ed last year because he knowingly violated a team rule in the area of personal conduct. We consider every violation of a team rule or NFL policy on an individual case-by-case basis, and we evaluate a possible return to the team on that same basis. Ed understands our team rules and our mandate that players represent themselves as professionals at all times. We feel the lessons Ed has learned will allow him to be what we demand from our players," said Colts Head Coach Jim Caldwell.

Though Big Ed is back with the Colts, me might not be out of the woods. The NFL could suspend Johnson for the marijuana charge. There is also the issue of how will teammates welcome him back and treat him. How will fans welcome him back? How will they treat him? The sentiment among many is Ed's actions cost the Colts a title in 2008. One of the big weaknesses for this team was run defense, and outside SS Bob Sanders, Ed Johnson was the best run defender. His absence haunted the Colts all season long. The Colts desperately tried to replace him, even attempting to trade for Buffalo's John McCargo.

Regardless of how the team treats him, the fact is Big Ed is back. He never seemed like a bad guy or a jerk or anything. He was just a dumb kid who made a dumb mistake. Now, he is getting his second (and likely last) chance. On a personal note, I hope he doesn't blow it.

This move adds yet another big piece to the puzzle that is the 2009 roster. Prior to the 2009 NFL Draft, the DT spot was the weakest on the team. Now, with Fili Moala and Terrance Taylor drafted (along with Pat Kuntz and Adrian Grady signed as rookie free agents), the re-signing of Big Ed Johnson makes the DT spot one of the deepest on the team.

A weakness is now a big, BIG strength.

Hopefully, along with Mookie Johnson and Daniel Muir, Ed and the other DTs can provide an awesome DT rotation that will scare the living piss out of everyone in the NFL! 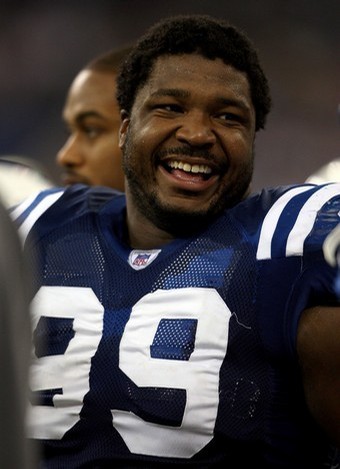