Reasons to feel very good about the 2009 Colts

Share All sharing options for: Reasons to feel very good about the 2009 Colts

One of the annoying elements of the pension plan story is it has distracted us fans from the fact that this has been a very, VERY good off-season for the Colts in terms of bringing in new talent. It's too bad that the well paid but painfully misinformed media pundits at places like CBS Sports haven't picked up on this. From Don Banks, who is normally pretty good but, for some reason, today decided to leave his brain in his morning coffee:

Predicting the demise of the Colts would appear a fool's game, given their seven-year streak of making the playoffs and a six-year run of winning at least 12 games every regular season. But the law of averages say it has to end at some point for Indy (doesn't it?), and with new head coach Jim Caldwell elevated to replace the departed Tony Dungy, maybe some key component of the team's success will go missing this season for the first time since 2001.

When they were sitting 3-4 entering November last season, the Colts looked like an aging team that finally had too many vulnerabilities for their all-world offense to overcome. Then Peyton Manning got healthy, and it all came together in the form of a nine-game winning streak entering the playoffs. This is a team that hasn't lost anyone it can't live without this offseason -- Marvin Harrison included -- but that might not be enough in a division where the Colts could find themselves looking up at both Tennessee and Houston.

What Don leaves out of his "analysis" is all the injuries and bad luck the Colts experienced to start the season. Quinn Pitcock and Ed Johnson were gone. Ryan Lilja did not play at all in 2008. Tony Ugoh and Jeff Saturday started the year hurt. Kelvin Hayden got hurt early in the year while Marlin Jackson got hurt late. And so on and so worth.

Again, stuff one should know if they followed the Colts. For Banks, who likely only watches the Colts when they are on a prime time game, it's hard for him to know what he is talking about.

The fact is the 2008 Colts were one of the youngest teams in football, and the 2009 squad wil be even younger. So, anyone saying "the Colts looked like an aging team" simply doesn't know WTF they are talking about.

Gone are veteran mainstays like Marvin Harrison and Hunter Smith. They will likely be replaced by rookies. QB Peyton Manning is only 33 while Reggie Wayne (31), Dallas Clark (29), Dwight Freeney (29), Robert Mathis (27), and Bob Sanders (28) are just now hitting the prime of their careers.

Add to this the newly re-signed Ed Johnson (DT), Kelvin Hayden (CB), Tyjuan Hagler (LB), Freddy Keiaho (LB), and Matt Giordano (SS) it it seems the Colts defense will have some much needed depth in 2009. The Colts also added free agent LBer Adam Seward, a guy who can play two LBer positions in the Tampa-2, and retained promising young DTs Antonio "Mookie" Johnson and Daniel Muir. 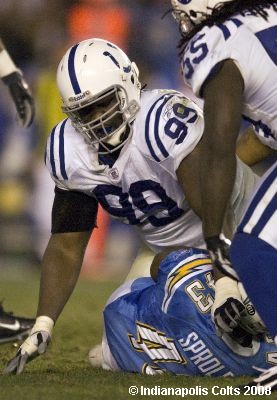 On offense, several free agent linemen were added, like Kyle DeVan and Brandon Barnes. Jeff Saturday was re-signed to anchor the line, and second year players Mike Pollak and Jamey Richard are poised to take the next step. There is also the Ryan Lilja factor. Lilja, when healthy, is one of the best guards in the AFC. He did not play at all in 2008, and his future seems in doubt. But, if he can indeed play, that adds even more beef and athleticism to the Colts o-line. 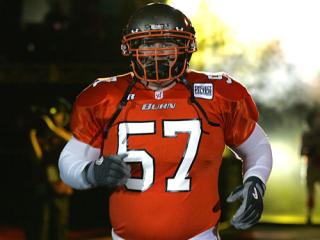 And then there are the rookies. RB Donald Brown is going to have an immediate impact both in the passing and running game. On defense, rookie DTs Fili Moala and Terrance Taylor were taken because they bring size and speed to a defense that had massive problems stopping the run in 2008. CB Jerraud Powers adds depth to an already VERY deep secondary (that set an NFL record for outstanding pass defense in 2008), and WR Austin Collie adds both slot receiver and punt returning abilities to a very potent offense.

Lastly, there is the return of important players from injury. CB Marlin Jackson and RB Mike Hart are on schedule and expected back. LBer Gary Brackett, the captain of the defense, was out all of December 2008 and the playoffs because of a broken leg. The leg is healed and he should be ready for camp. Joseph Addai should be back 100%, and Bob Sanders should be ready to return to his old BSBD self after having a full off-season to heal. 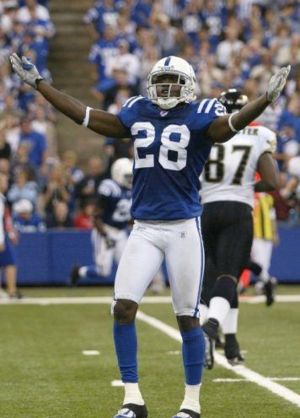 This man will return in 2009 to annoy the AFC South

Basically, from a talent perspective, this is one of the most talented Colts teams we've seen of late. While Tony Dungy is gone, the simple truth is new coach Jim Caldwell has a lot to work with. This is a deep, young team that has no plans to simply fade away, despite what "averages" say.