We established the key training camp battles for 2009. Now, with nearly 30 days left until camp, we'll tackle two camp battle evaluations a week, giving insight and analysis on who is competing for the job, what they offer, and our estimation as to who will win.

As we always say around here, camp competition is one of the building blocks of making a championship caliber team. Regardless of contracts, singing bonuses, and all that garbage, players earn their starting spot in camp. If not, if they are just handed the job because they were drafted high or signed some kind of big contract, then you are cheating your football team. This is especially true if another player is better in camp, as was the case in 2006 when a 7th 6th round rookie (Antoine Bethea) was better in camp than an established veteran that was well paid (Mike Doss). Bethea beat out Doss for one of the starting safety positions, and was a big part of the Colts winning the Super Bowl that year.

Yes, broken record on this point, I agree. But, it's what we believe in as bloggers, and it is a tried and true way to building a great team. Today, we focus on the players competing for the third running back spot on the roster.

Traditionally, the Colts carry three running backs on their active roster and keep another back on the practice squad. Last year's active roster RBs heading into Week One of the 2008 season were Joseph Addai, Dominic Rhodes, and then-rookie Mike Hart. But, injuries to Addai and Hart forced Indy to juggle several backs on and off the active roster. Two of those backs were practice squad players Chad Simpson and Lance Ball.

For 2009, veteran Joseph Addai and 2009 first round pick Donald Brown are locked into the #1 and #2 running back spots. In the past, the #3 back has been what Bill Polian has described as a James Mungro-type player, referencing former Colts back James Mungro, whose career was cut short after a knee injury in 2006's training camp. Back #3 is often a short yardage and goal line back who will also play heavily on special teams either as a gunner or a returner. The Colts value cutback runners due to their offensive scheme, and the ability to pass block and catch the football are also important. 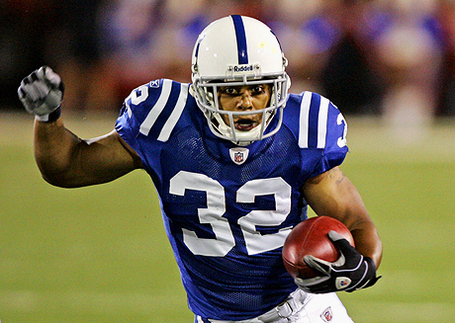 Analysis: The third running back spot is Mike Hart's unless he is unable to return 100% healthy from major knee surgery last year. Hart injured his knee during the October 13th clash with the Baltimore Ravens, ending his promising rookie season. Hart was drafted by the Colts in Round 6 after a legendary collegiate career at Michigan. Hart's 40 time at the Combine in 2008 was not that good (4.65), but as a rookie Hart showed good burst when running.

In pre-season last year, Hart looked very good, displaying strong cutback runs and good blocking technique on passing downs. He played in 5 games in the 2008 regular season, mostly on special teams as a gunner. In October of last year, the Colts started using Hart more in the regular offense, especially on short yardage. However, after just his second NFL carry, he hurt his knee and was done for '09.

The key for Hart in 2009 is proving he is healthy. According to Bill Polian, Hart will start training camp on the PUP, which could be problematic for Hart is players like Lance Ball look good in camp. 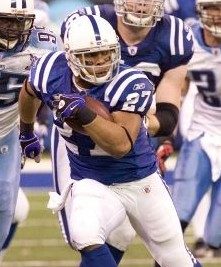 Analysis: I like Mike Hart and I have a ton of respect for him. However, there is just something about Lance Ball that makes you root for him. An undrafted kid out of Maryland, Ball landed with the St. Louis Rams early in 2008 only to eventually get picked up by the Colts. Not long after signing Ball, the Colts had him playing in the running back rotation. His biggest controbution came in Week 17 against the Tennessee Titans, where Ball ran for 83 yards on 13 carries (6.4 a carry). He showed a comination of toughness and size (232 pounds!) that Colts fans have rarely seen. Ball showed impressive burst when the Colts ran off tackle out of an offset I formation.

It remains to be seen whether Ball can block well enough at the NFL level, or is he can offer much as a special teams gunner. His size and power make him an ideal short yardage runner, and if he can excel at this in camp and pre-season then he could push Mike Hart off Indy's active roster. 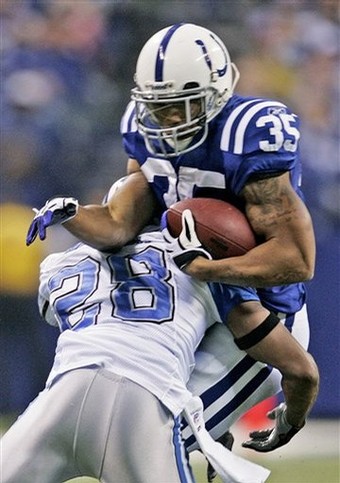 Analysis: Of all the candidates for the third back spot, 2nd year player Chad Simpson has seen the most extensive playing time. Simpson, a practice squad player elevated to the active roster, played in 11 games in 2008 as both a running back and a special teams returner on kick-offs. As a back, Simpson had 45 yards on 15 carries (3 yards a carry) and scored 1 TD. As a returner, he had 15 returns for 344 yards. His longest was for 46 yards.

To put it bluntly, Simpson's numbers are awful.

No one game exemplified his poor running skills than the Detroit Lions game last year. Against the Lions, who had a horrible rush defense, Simpson ran for only 17 yards on 7 carries. He also fumbled once.

In red zone situations, Simpson averages 1.4 yards a carry. Even though he is bigger than Mike Hart, Simpson does not seem to run with any power or burst. As a returner, he doesn't turn the ball over, but that is kind of expected when you evaluate kick returners. He doesn't have much break away speed, and is not skilled at making people miss.

Thoughts Prior to Camp: If Mike Hart is healthy, he gets the job. If he isn't, and Lance Ball continues to build on his strong showing last year, Hart is done as a Colt. I think it will take a miracle for Chad Simpson to make this team again in 2009. He's just not that good at anything. I would not be surprised seeing two of the three players profiled here cut by September with the Colts signing a rookie free agent to the practice squad after the final roster cut downs.

Right now, I think the money is on Lance Ball. Hart opening camp on the PUP is not good. Ball is making progress this off-season and should look good in pre-season if he stays healthy. If he looks good and Hart is still PUPed, Ball will win the job.