Share All sharing options for: Eric Foster and Colts defensive players have "fallen in love" with Larry Coyer

One story I am looking forward to seeing is how the Colts defense will respond to new defensive coordinator Larry Coyer. We've blogged about it all off-season, pretty much since the first day we knew Coyer would get the job. Since then, we've seen several Colts players offer their opinions on Coyer, and the theme has been consistent: Very knowledgeable coach, high energy, brings a "new energy" to meetings.

Now, when you look at this kind of praise "on page" (as they say), it comes off as fairly typical. Most players talk about new coaches bringing "new energy" to the team. It's a vague why of acknowledging there is change without praising that change too much in the event the new coach, you know, sucks!

But regarding Coyer, I don't get that vague, general, yeah-I-gotta-say-nice-things-about-the-new-coach vibe from players.

I'll tell you what, we've fallen in love with this guy [Coyer]. He brings a different aspect to our meeting rooms; more energetic. He's head on, face on. You learn a lot from him. And his knowledge of the game, we're like "Wow!"

He hasn't coached a game yet, but already Coyer seems to have had a positive affect on several Colts players. Foster, Bob Sanders, Dwight Freeney, and Gary Brackett have all made it a point this off-season to acknowledge Coyer's positive presence. Now, the cynic in all of us says these guys are doing this to, essentially, suck up to their new boss.

That's not the case with Colts players praising Coyer.

Dwight Freeney, Bob Sanders, and Gary Brackett are all locked up into long-term deals. Hell, the entire defense is built around those three players. If anything, Coyer has to win them over, not the other way around. And from the looks of things, he has.

In light of this, perhaps more significant than the retirement of Tony Dungy was the termination (or "letting go," or "letting him pursue other ventures"; whatever) of Ron Meeks. I have yet to get any kind of off-the-record confirmation on this, but my general impression was many of the key players had grown tired of Meeks. As far as I know, they never voiced their opinions about him to the press, likely because Tony Dungy was so involved in the defense. But if new coach Jim Caldwell had retained Meeks, I think we would have heard some grumblings. As I have often remarked, I cannot recall a single Colts player ever praising Ron Meeks. Ever!

The positive for Meeks is he has a chance to really build a stronger reputation with the Carolina Panthers, where he should produce a good defense. He has the talent. And, unlike in Indy, players in Carolina are saying positive things about Meeks. But the early praise players seem to have for Coyer might pay off in the form of a rejuvenated, vibrant, aggressive Colts defense.

For three years, this defense has been nearly decimated with injuries. The last time it was healthy (for the most part) for the entire season was 2005. The Colts nearly went undefeated that year. With Coyer possibly platooning Sanders and Melvin Bullitt at safety, implementing more linebacker blitzes, and working with a healthy stable of young defensive tackles, the one story I'm excited about is the 2009 Colts defense. Don't get me wrong. I love watching Big P and the Midgets fling the football all over the field, scoring touchdowns galore. But when the Colts defense is on its game (like from Week 1 to Week 8 in 2007, or the playoffs in 2006), it's just as cool as watching Peyton throw for 500 yards and 5 TDs in one game.

If Coyer manages to get this defense to play the way we all know it can, I might fall in love with the white-headed ball coach myself. A manly kind of love, you understand. Manly, like this: 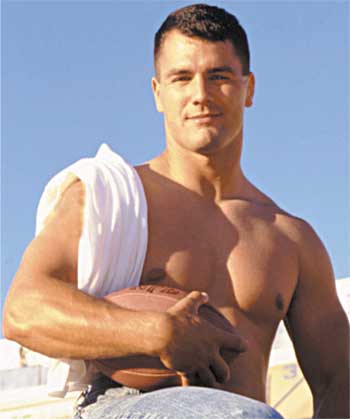 Hehe. Been a while since Vinatier beefcake was posted.

Camp opens in a week-and-a-half. The maturation of Coyer's Tampa 2 defense, and how players perform in it, will be closely followed all throughout August. Go Colts!