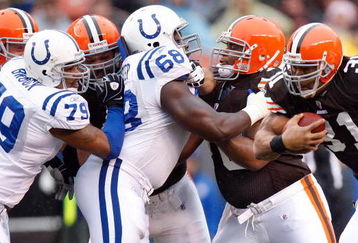 From the start last year, the defensive tackle position was an utter disaster. This was especially true for the over tackle position, commonly referred to as the nose tackle (NT). Traditionally, Indianapolis has not deployed a prototype nose tackle, ala Vince Wilfork, Casey Hampton, or Jason Ferguson.

Coming into the 2008 season, the Colts looked very deep at the position. The Colts had two young, potentially Pro Bowl caliber NTs returning in Ed Johnson and Quinn Pitcock. Coaches also liked what they saw in mini-camps from then-rookie Eric Foster out of Rutgers. But all that potential at the nose tackle spot for the 2008 Colts disintegrated before our eyes in less than two months.

Entering 2009, the Colts once again have a great deal of talent at the NT spot. But, will it last, and (more importantly) who will win the starting NT spot in camp. Our preview will breakdown who has the best shot, and why.

The 2008 disaster at NT started the day training camp opened. On the way to Terre Haute (literally, like, in his car driving), second year DT Quinn Pitcock stopped his car, turned around, and retired from football. It was literally a WTF moment when the story broke as Pitcock was known as a fiery competitor at Ohio State and had played so very well in 2007. A little over a month later, after an embarrassing opening day loss to the Chicago Bears, starting DT Ed Johnson was arrested for speeding and marijuana possession. Days later, he was kicked off the team. This meant that rookie Eric Foster (who weighed roughly 270 pounds) was thrust in to play nose tackle.

Despite Foster's toughness and determination, teams ran the ball at will against Indy. In October, desperate for some stability at the NT spot, Bill Polian traded a third fourth round pick to the Buffalo Bills for John McCargo. But, the Bills tried to pawn a injured player to the Colts. It was discovered that McCargo had a bulging disc in his back. He failed his physical, which nullified the trade. Foster continued playing much of the year as the starting NT, with newly-signed second year DTs Antonio Johnson and Daniel Muir backing him up.

NTs for the Colts are usually at or slightly under 300 pounds. They are not the 340-350 pound space-eaters other teams use. Quickness, speed, and power are all traits a Tampa-2 NT must possess. The prototype for a Tampa-2 NT was Anthony McFarland. For years, he anchored the Tampa Bay Buccaneers defense and was critical to the Colts winning the Super Bowl in 2006. Under Tony Dungy, speed and quickness were valued the most, and that still has not changed as the Colts have transitioned to Jim Caldwell. Despite what many have written about the Colts "beefing up" their defensive line, the reality is they have (essentially) the same depth at NT they had going into 2008. The only NT that breaks the mold is rookie Terrance Taylor, a 6'0, 319 pounder out of Michigan.

Necessary attributes: Quickness; able to engage multiple blockers and still be able to attack gaps; strong burst; strong at point of attack; engage linemen to allow under tackle (or three technique tackle) to attack gaps and penetrate into offense's backfield 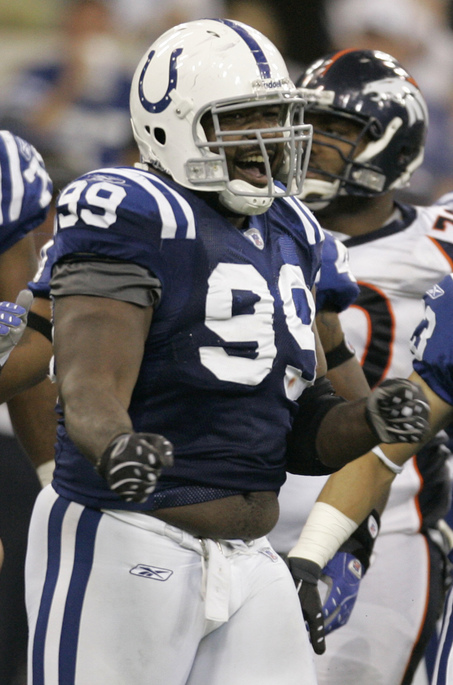 Analysis: Big Ed is back in blue, and despite his run-in with the law in September of last year, the Colts decided to make a low risk, high reward offer to Johnson this off-season. They re-signed him to the team, but because of his legal issue he will be suspended for the first game of the 2009 season.

Prior to getting kicked off the team, Johnson was viewed by some to be a potential Pro Bowl-caliber DT. He took over the starting job at NT after Booger McFarland was injured in training camp n 2007. All throughout 2007, the Colts had a stout run defense. Had Dwight Freeney not gotten hurt, the Colts likely would have repeated. Their defense was that good.

Big Ed has the inside track to win the starting NT job mainly because it was his job in the first place. When Ed is on his game, he is a top tier DT. He attacks the point very well and shows exceptional football speed. At 296 pounds, he is the ideal weight for a Tampa 2 NT. He can take on multiple blockers, allowing the three technique tackle to penetrate gaps in the o-line and attack the ball carrier. Ed can also attack gaps himself, using his quickness to create rush on the QB.

The key for Big Ed is his mental toughness. Is he truly willing and able to clean up his life and focus on football? Many of us are pulling for Ed, but we all know that this is his last chance to make it in this league. If he has any kind of run-in with the law again, his career is finished. 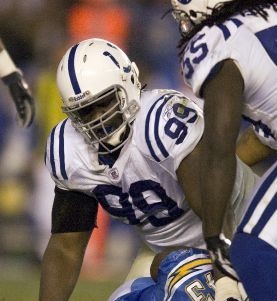 Signed off the Tennessee Titans practice squad in an act of utter desperation by Bill Polian, Mookie Johnson seemed like all he could offer was a warm body in case anything happened to last year's starter at NT, Eric Foster. However, in December, we started seeing more and more of Mookie playing NT, and the results were encouraging. Though inconsistent game to game (he looked great against the Chargers in Week 14, but seemed to play poorly against the Texans three weeks later), it was understandable seeing as Mookie went from the practice squad of a rival team to (essentially) splitting time with Eric Foster. He had to learn a new defense with new coaches seemingly overnight.

Considering all that, Mookie's play in 2008 was pretty damn good.

Now, after an entire off-season working with line coach John Teerlick, new defensive coordinator Larry Coyer, and the trainers, Mookie has a real shot to win the starting NT spot. In many ways, he is similar to Ed Johnson, though he is taller (6'3) and bigger (312 pounds) than "Big" Ed. For someone so physically imposing, Mookie has good quickness and strong "pop" when he engages blockers.

Mookie impressed many scouts back in 2007, when he came out of Mississippi State. The Titans thought enough of him to draft him in Round 5 in 2007. [UPDATE: As reader project geo pointed out in the comments, Johnson torn his ACL in his left knee and was placed on Injured Reserve his rookie (’07) season.] In 2008, because the Titans had players like Albert Haynesworth and Tony Brown on the roster, they designated Mookie to the practice squad. Per NFL rules, any team can sign a player off an opposing team's practice squad, though few teams do this.

If Mookie has gotten more comfortable playing NT in Indy's Tampa-2, he could become a real force in the middle for this club, solidifying the position with a player with size, speed, and youth. 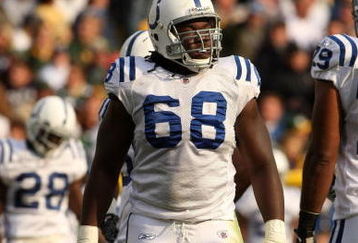 The unsung hero of the 2008 season was Eric Foster. If the NFL gave out a true "tough guy" award last year, this dude would have won it. At 270 pounds, this kid held down the fort at DT. Oh, and he was a rookie last year. Show me another rookie on this team who has ever performed better under such conditions. No play better exemplified Foster's toughness and determination than the hit he put on Willie Parker Mewelde Moore on the goal line in Pittsburgh, where the Colts beat the Steelers for the first time in 40 years.

In 2009, Foster may transition into more of a three technique tackle. This off-season, he's talked often about how he works hard in the video room, studying players and plays; working to get better. He sounds like the defense's Peyton Manning when he talks about tape study. He's also worked on his pass rushing skills, hoping to generate more pressure on the QB from the DT spot.

For Foster's long term health, he is best served playing three technique DT in the Tampa-2, not nose tackle. However, if he is needed in a pinch, he can be serviceable at NT. Hell, he might just be a playmaker at NT, as he was against the Steelers. But, realistically, Foster likely will focus on the other tackle spot, with a few snaps at NT sprinkled into the rotation. 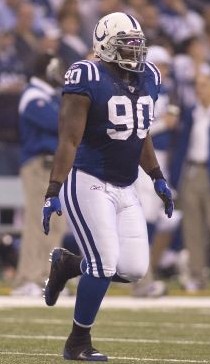 At 6'2, 312 pounds, Daniel Muir is one of the bigger players on the Colts. Again, despite what many have written, the Colts actually have a lot of "size" at the DT position. Muir signed with the team prior to Week One in 2008, rotating in with Foster, Mookie, and others. Muir was cut by the Packers when they trimmed to 53 in September 2008. The Colts immediately snatched him up. However, Green Bay ran a totally different defensive system than what Indy runs. Muir was also hampered by a hamstring injury much of the 2008, keeping him inactive for several games.

When Muir did play, he played quite well. The first Titans game and the Bengals game were good examples of what Muir brings to the table at NT. He's big, strong, and plays with a fiery temperament. In practices during OTAs this off-season, Muir was quite animated.

The Colts thought enough of Muir to re-sign him this off-season. If he can consistently play at a high level, as he did in a few games last year, his size and attitude could give him an edge over the laid back Ed Johnson. 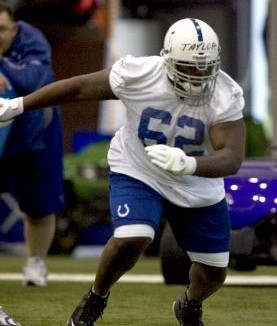 The "wildcard" in all this is rookie Terrance Taylor, a 319 pound monster at DT who has a background in wrestling. After the draft, Polian said that Taylor was a "departure" from the norm for the Colts. Speed and quickness are not Taylor's strengths. He is big. REALLY big. Taylor's physicality and stoutness made him tough against the run. Where he lacks polish is his pass rushing.

Taylor might be more of a project at this stage. He doesn't move well, and seems slow off the line. But his size and power make him intriguing at nose tackle.

Thoughts Prior to Camp: Ed Johnson clearly has the inside track, but Mookie Johnson and Daniel Muir now have a full off-season to get comfortable with the system and the coaches. Look for them to push hard for playing time. Foster is likely transitioning to three technique tackle, and Taylor seems more of a three year project player.

Because of Ed Johnson' one game suspension, it is possible that all four of these NTs could make the 53 man roster, with one getting cut after Week One. We will follow the NT battle very closely in camp, and, like the rest of you, we will pray on our hands and knees that the NT position is not decimated by injuries as it was last year.