Share All sharing options for: ESPN confused as to which black man is running the Indianapolis Colts

For the second time in two weeks, ESPN's programming directors seem to think that all black coaches on the Colts (not named Tony Dungy) look alike. While conducting an interview with Raheem Brock last week, the question regarding new Colts coach Jim Caldwell was asked. While Brock answered the question, ESPN cut to this picture: 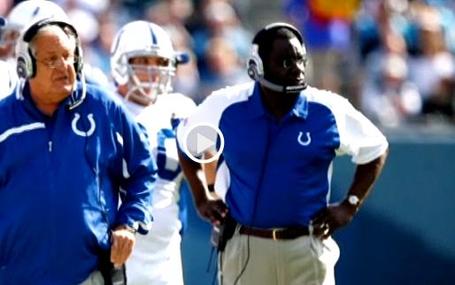 As you can see, quite clearly, the black man standing in the center is NOT new Colts head coach Jim Caldwell. That's running backs coach Gene Huey, a fine coach in his own right who has worked for 18  years in the NFL and 15 years with the Colts. While the clip runs, the image zooms in on Huey even though his name is never mentioned on air. The people talking (Brock and the ESPN "reporter" interviewing him) are, in fact, discussing Jim Caldwell, indicating to the viewer that the black man they are zooming in on in this image is Jim Caldwell.

Now, if this mistake happened only once, I'd let it slide. A one-time screw-up is annoying, and just sloppy work on ESPN's part, but forgivable. Sadly, ESPN mistaking Huey for Caldwell is not a one-time issue. It's happened before on other ESPN produced NFL shows.

The Worldwide Leader has taken a beating the last two weeks, and deservedly so. Now, we add spikes to our boots as we stomp on the limp body that is ESPN's programming department. It's not hard to find an image of Jim Caldwell! Simply Google the words "Jim" and "Caldwell," and you get this lovely image. 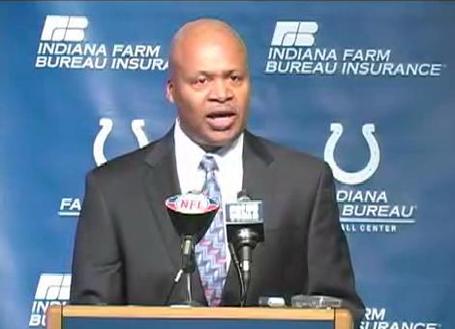 As you can see, the man in the picture directly above these words looks nothing like the man ESPN is broadcasting as "Jim Caldwell." Now, I don't know what idiot is running their video or image production department, but you pretty much need to be both blind and dumb to confuse these two men. Confusing Gene Huey for Jim Caldwell is like confusing Jerry Seinfeld and Jerry Springer.

These video segments run in loop at ESPN, and have yet to be altered or corrected on ESPN.com. In fact, in the July 2nd ESPN segment, linked above, they run the "Gene Huey-Caldwell" image while commentator Mike Golic talks about Caldwell. Then, later in the exact same piece, they post an actual picture of Caldwell (standing next to Peyton Manning) while Golic continues rambling about the new Colts coach.

I mean, honestly! Do they just not care?

Screwing up once is annoying, but not damning. We all screw up once. I once said the Colts should have drafted Ryan Leaf. Twelve years alter, I still can't live that down. But, ESPN screwing something like this up multiple times, and not even bothering to correct the screw-up is just... well, it's amateur at "best" and (yep, I'm going to say it) damn near racist at worst.

Please ESPN, stop screwing up! I'm getting really tired of writing about how much you truly and deeply suck at your job, especially when it pertains to covering the Indianapolis Colts. You've already failed as a journalistic media entity. Now you're failing as an entertainment one.