We discussed the nose tackles last week. This week, we focus on the "under" tackle, or the "three technique" defensive tackle battles that will have the attention of fans and coaches alike at training camp, which opens in just three days.

As we stated last week, the "over tackle," or nose tackle, in a Tampa-2 is usually a player weighing at or around 300 pounds. This player needs to have power at the point of attack and able to engage multiple blockers. Players on the Colts who fit this mold are Ed Johnson, Antonio Johnson, and possibly newly signed rookie Terrance Taylor. By engaging the offensive line and "engulfing" multiple blockers, this frees up the defensive ends to shoot gaps and work angles to get after the QB.

It also enables the under tackle DT to do the same thing: Line up over and attack gaps in the offensive line rather than engage linemen and hope to overpower them.

In the nine years the Indianapolis Colts have run Tampa-2, they have never had a dominant under tackle. Warren Sapp made a living killing QBs as the UT in for the Tampa Bay's Buccaneers. Players like Tommie Harris, John Randle, and Kevin Williams have also played dominant football during their careers at UTs in a Tampa-2 system. The best UT Indy has ever had is Raheem Brock, a defensive end converted to DT who is now re-converted to defensive end.

Under tackles are typically smaller than the nose tackle. They can weigh anywhere from 255-300 pounds. They use quickness, speed, and technique to penetrate the gaps in an o-line and knife into the backfield in order to create havoc. Girth and power are not the premium. It's all about speed.

This past off-season, the Colts and Bill Polian worked hard to bring in players can could finally lock down the starting UT position. This preview (or training camp primer, so to speak) will breakdown who those players are and who has the best chance to win the starting job.

Unlike the nose tackle position in 2008, the under tackle position was not an unmitigated disaster. While many like to bash, berate, and dismiss Keyunta Dawson (Indy's 6'3, 254 pound DT), the fact of the matter is that when Dawson worked alongside a good, consistent over tackle (like Ed Johnson) the Colts run defense was one of the better ones in the league. Last year, while playing mostly alongside a rookie DT who was undersized himself (Eric Foster), Keyunta Dawson struggled.

As we often state here at Stampede Blue, size and girth are two very over-rated attributes when evaluating players. A "big fatty" is not going to solve your problems stopping the run. And even though Indy went out and drafted USC's Fili Moala (6'4, 300 pounds), it is not Moala's weight or size that will help him. It's speed, and speed, and more speed with the right technique that will give the starting UT the edge he needs to succeed. 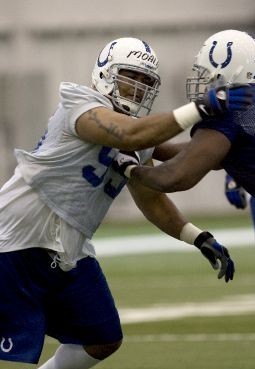 Moala was drafted specifically to play (and start) as the three technique under tackle in the Colts defense. Anything less means he is a bust, and a waste of a first day pick. So, saying this job is Fili's to lose is an understatement. If Fili does not start Kickoff Weekend against the Jaguars, Colts fans will wonder why he was drafted in the first place. It is literally that simple, fair or unfair.

What makes Moala unique is he is a tall, big DT than can pressure the QB.

Real good player with some intriguing tools but has been overhyped... Could be a perfect fit for a Tampa 2 scheme.

Moala only had 5 sacks in his career at USC, but part of that was USC switching to a 3-4 defense last season. Prior to that, USC played a lot of Tampa-2. His size and long arms could help him give Indy the added dimension of batting down passes, and his frame could make it difficult for opposing QBs to see their receiving targets.

Durability and comfort-level are the two demons Moala must overcome. Rookies have a tendency to wear down as their minds and bodies adjust to the man's game, not the little boy's game they had fun playing in college. Moala has the physical tools to win this job and develop into a pretty good DT. If he doesn't win this job in camp, many people will question why he was drafted in the first place. The Colts are far to reliant on high picks making an immediate impact for Moala not to win this job. 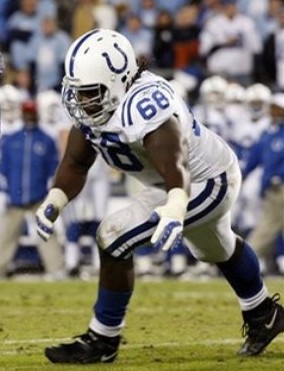 We talked about Eric Foster last week as a nose tackle, but for Foster's long term health and longevity in this league he needs to switch to UT. All off-season, he's talked about getting better at pressuring the QB and developing pass rushing skills. He's known for studying game tape of other players, and Foster himself plays with a passion and toughness d-line coach John Teerlick loves. 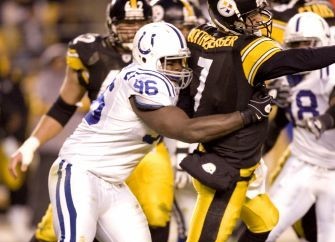 I am a staunch defender of Keyunta Dawson. I have been ever since he started his first game as a rookie back in 2007. He stepped in and replaced Raheem Brock at DT against the Chargers, and for the entire game he introduced LaDainian Tomlinson's face to the San Diego turf.

Dawson is one tough, durable SOB! At 254 pounds, he is a good 10-12 pounds lighter than Dwight Freeney. In fact, he is almost the exact same height and weight as Colts second year linebacker Philip Wheeler. Yet, despite playing at only 254, Dawson plays his position well by using excellent technique. When he has someone next to him who can occupy blockers, Dawson can attack his gap with excellent effectiveness and cause problems for offenses.

Unfortunately, this year I get the sense that Dawson will need a great camp just to make the team. With Moala drafted and Foster possibly switching to UT, Dawson is a bit expendable. But, Dawson is a hard worker who has risen to the challenge before. If he impresses at camp, maybe he sticks around. 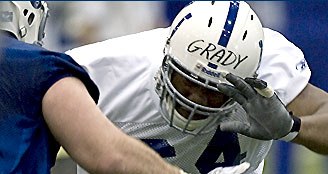 The "wildcard" in the UT camp position battle is undrafted rookie Adrian Grady. If anyone looks the part this year's version of Eric Foster, or 2007's Ed Johnson, or 2006's Antoine Bethea, it's Adrian Grady. At 6'2, 290 pounds, he is the ideal height and weight for a Tampa-2 UT. He has great "pop" at the line of scrimmage, and he can attack gaps with strong force. He also uses a strong, low center-of-gravity to get leverage underneath blockers.

Grady's biggest problem in college was health. It seemed as if he was always hurt. His senior season, he shook off the injury bug and really started to shine as a defensive tackle. October of last year, he was named Big East Defensive Player of the Week. He had 7 tackles and 2 sacks against then #14 ranked University of South Florida.

Grady is definitely someone worth watching at camp. If he can stay healthy, he seems to have the physical tools to succeed at UT for the Colts.

Thoughts Prior to Camp: This is Fili Moala's job to lose (or win, however you want to put it) and anyone who says otherwise is pulling your leg. On a club that surrendered over 100 rushing yards a game in 2008, the DT drafted the first day is the guy who gets the job. If he can't win it, it is serious egg on the face of Colts management.

Fortunately, Colts management is pretty damn good. Foster and Grady will certainly push Moala, but in the end the rookie should win the starting job. Dawson is the odd man out, which is unfortunate. Baring a great camp, he will likely be cut.