Know Your Colts History: Roy Hall IS the Most Intriguing Guy on the Roster

Share All sharing options for: Know Your Colts History: Roy Hall IS the Most Intriguing Guy on the Roster

Last  week, I described Roy Hall as the "most interesting guy on the roster" and hoped that he would stay healthy this season.  Calling Hall the most interesting player on the roster was a bit tounge-in-cheek, but there's certainly a cloud of mystery that surrounds him.  After he was drafted in the 5th round in the 2007 draft, all that anyone could say about him was that he was an incredible athlete that needed work on his skills as a receiver.  That excited me.  Bill Polian has always been known for taking the player who can produce right away over the athletic project, so when he changed course and went after the diamond in the rough, I saw him as someone who could break the mold and give the Colts an athletic dimension that they had lacked.

In hindsight, Polian probably just drafted Hall because his great physical tools make him a great fit as a versatile special teams player, but I'm still holding out hope that the Colts staff has secretly been developing his receiver skills to turn Hall into some sort of mini-Terrell Owens without the ego and the dropped passes.  Maybe that's a bit of over-the-top optimism, but that's what we live on as sports fans, right?

Only time (and health) will reveal what Roy Hall is supposed to be on this team, but there's one thing that we already know: His photographic endurance is amazing.  I was looking for some Colts photos on Flickr and I found this set of photos of Roy visiting with employees at IU hospital.  As nice as it is to see Hall visiting with hospital employees to tell them they're doing a great job, what's more amazing is that he seems to have gotten his photo taken with just about everyone in the hospital.

That day, I'm sure that Roy Hall felt like as big of a star as Peyton Manning or Bob Sanders.  I get the feeling that Roy Hall will never reach the same superstar status of those two, but he can still be a cult superstar that's adored by the fans who notice the little things he'll do on special teams and appreciate when he chips in at wide receiver.  It may not come with the same perks that being a mega-watt superstar does, but it does come with a unique level of respect. 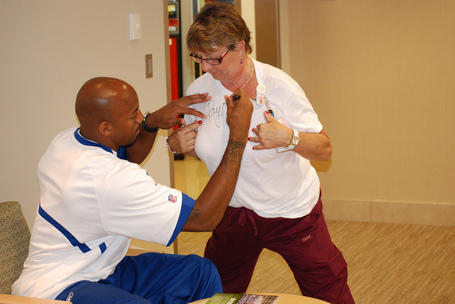