Share All sharing options for: Know Your Colts History: Where's #88?

Maybe bringing this subject back up after the first Colts football action in months is in bad form, but it's something I simply can't let go of yet.  Why isn't Marvin Harrison playing for an NFL team yet?

I know, he's not the Marvin Harrison that he once was.  He's probably not even half of the Marvin Harrison he once was.  But still, 40% of Marvin Harrison is good enough to be someone's 3rd receiver.  Last year, he finished 54th in receiving yards, 62nd in DYAR, and 63rd in DVOA.  Even if he dropped to say, 75th in those categories next year (probably a safe bet given that he'll be a year older and he won't be as familiar with the system), that would equate with being an average 3rd string wide receiver, if you distributed the wide receivers ahead of him evenly among the league's 32 teams. (Sure, it would be impossible to actually distribute wide receivers evenly, but you get the idea.)

Far be it from me to suggest some teams that could use a reliable 3rd receiver, but really, at least half of the league should be knocking down Marvin's door to acquire his services.  Let's review his credentials:

Sure, he'll be 37 in two weeks and some people might be scared of him because he had a run-in with a guy who is magnetically attracted to guns, but those are silly excuses.  If 39 year olds can still get offered starting jobs and if a felon who never had a QB rating higher than 81.6 can still get a 2 year contract, then why on earth can't someone roll the dice on Marvin Harrison?

Undoubtedly whoever signs Marvin knows full well that it will only be a matter of time before he ends up as a part of this picture gallery.  But as much as people bemoan great players ending their career with a different team than the one they became legendary on, it's something that he's earned the right to do.  Hopefully there's a team out there that will realize this soon enough and give him the chance to end his career with some shred of dignity.  Because as hard as it would be to watch Marvin Harrison playing as a 3rd wide receiver on an unfamiliar team, it would be much, much harder for me to see him fade away into nothingness because no one was interested in signing him.

So NFL teams, if you're reading this I beg of you: Please sign Marvin Harrison soon.  I don't care if you cut him after the season, I don't care if he doesn't even get any playing time this season.  Just give him enough respect to give him a chance to make your team better this coming season.  If Michael Vick can be given a second chance, why can't Marvin Harrison? 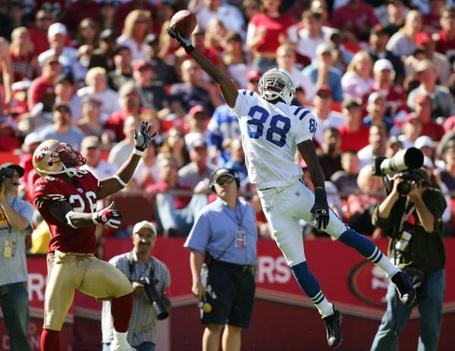