The Colts have two practices today that, while not "head knockers" as Bill Polian sometimes describes practices, they are the foundation for what will be a mock week of game planning. The third pre-season game is the best gauge to see the current state of the team. The coaches game plan for the opponent. The starters (those healthy) play for more than half the game. And since both sides usually work to try and simulate a real game, it can help give fans a bit of a glimpse into how the coaches will manage their teams as the "real bullets fly" in a live game.

But, since we cannot see the practices (unlike training camp), and since we are waiting for official information on the injuries to Matt Giordano, Mike Hart, and Chad Simpson, we'll go a little off topic (Colts-wise) here today to discuss some other pre-season action.

After seeing some things from last night's Chiefs v. Vikings game and the Cowboys v. Titans game, I gotta say that KC's defense certainly looks improved. I also have to say that the new Cowboys stadium is just... well, it's kind of funny. All that decadence. All that size. All seemingly there to compensate for a lack of... something (see after the jump for what I mean). 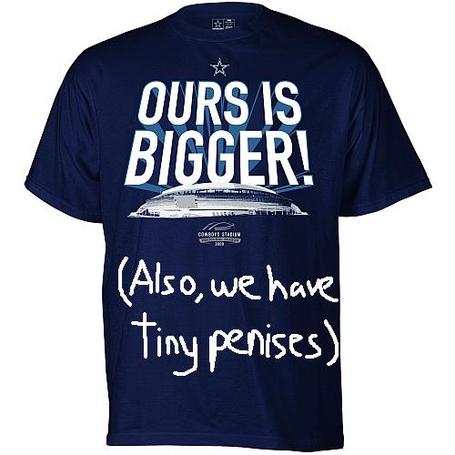 Much love to KSK for this very humorous observation. ESPN's Paul Kuharsky was at last night's unveiling of the new stadium for the Cowboys. He made an interesting early observation:

The incomprehensibly big HD screen is flashing snapshots of the building process of Cowboys Stadium. It's hard to take your eyes off it, and right now it's just a slideshow.

What makes this observation somewhat foreshadowing is last night Titans punter A.J. Trapasso kicked a punt that hit the huge screen hanging the top of the stadium roof! What this means is that:

A) The screen is too friggin' big, and

B) It either needs to be raised or removed because there is no way the NFL is going to allow that thing to obstruct punts.

If you see how big (and downright silly) the screen is, you know that raising, moving, or removing it is going to cost serious money. But, wasting money is something Jerry Jones is somewhat known for. Despite all his spending and bravado, his team still hasn't won a playoff game since Bill Clinton's first term in office.

The Dallas Cowboys-- Living proof you don't have to be good to get attention.

I watched a little of Brett Favre's very short debut as a member of the Minnesota Vikings. Unlike last year, it is very odd to see him in that new uniform. The green of the NY Jets uni made it a bit more acceptable. That purple and gold uni on him is like seeing Peyton Manning in a Redskins jersey. Looks awkward. 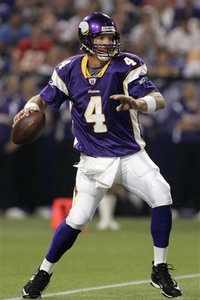 As for the Titans, Vince Young continues to suck as a back-up QB. He was 3-9 for 33 yards and a pick. Kerry Collins seems competent, but he is averaging something like 7 yards a throw. If the Titans are unable to get the ball down the field this year, they are in deep trouble. Still, it's pre-season. One cannot truly judge a team this time of year.

What have you noticed in pre-season thus far? Did you see the New England Patriots other night? How would you evaluate Tom Brady's health? He planting on that knee? You notice former-Colt DeDe Dorsey running for the Bengals? Talk. Talk. Talk. Talk.