Share All sharing options for: Announcing: The Stampede Blue Super-League

The expansion to four leagues is kind of unwieldy, but gave Mgrex03 an idea. The 4 Stampede Blue Leagues will be linked in a tiered system after this year, with this season doing the seeding. The top 3 finishers from each league (both finalists and the highest ranked semifinals loser, meaning the regular season champ is guaranteed a top 3 spot) go into the "MVP" league. The remaining 3 playoff teams go into the "Pro Bowler" league. The "Starter" league will be filled with the top 3 from the consultation bracket, and we'll round out the bottom 3 finishers into the "Rookie" league. 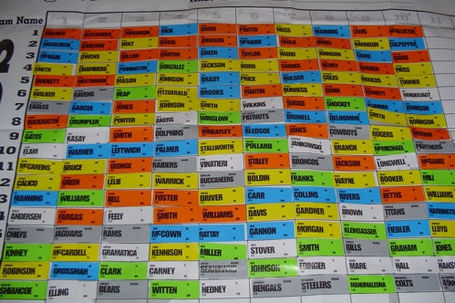 There may be some tweaks needed to fill in for dropouts and possibly to get a site writer commishing each league, but those should move additional people up the ladder rather than moving anyone down.

Down the road, next seasons results would be used for promotion/relegation, I'm partial to a number of 4 since it gives the top 2 regular season finishers a automatic up, but leaves two spots available and it makes the consultation bracket pretty intense. Only the finalists get to stay in the league meaning everyone in the bottom 6 needs 1-2 postseason wins to stay at their level.

So what do the league members think?  Neither of us are married to the idea, so if you hate it let us know but I think it's very cool and am really excited about it.