Last year, we had a HUGE turnout for community fantasy football; so big, in fact, that we had to create two separate leagues. Since then, our site community has tripled. So, I imagine this year's demand for FFL love will be even greater.

Because we have so much planned this year, I'm taking a step back from running a league and giving the reigns to mgrex03 (who is an FFL demigod). The other league will, once again, be run by shake n bake. People who participated in the leagues last year will get the chance to remain in the leagues. However, we're not doing keepers.

If you did not play last year, but want to play this year, please let us know in this thread. If the demand is high enough, we will make more leagues.

There is more info after the jump on this year's FFLs. Looking forward to owning all you peons and for getting back at metal_militia for kicking my butt last season.

Here is the league chart for the Stampede Blue League. The "Shake and Bake" league chart will get posted later by shake. If you played in these leagues and want to play again, let us know in this thread, please. 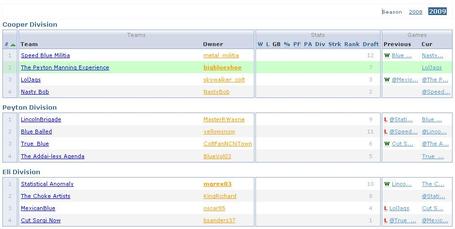 The link to the Stampede Blue League is here. Again, let us know if you want in. 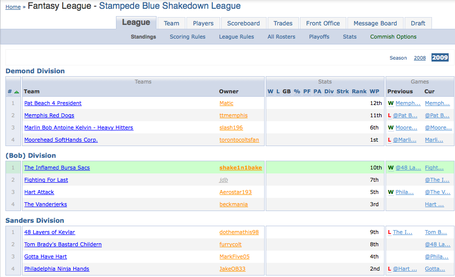 Returning owners sign in and makes some noise on the message board and I guess after a while we'll boot anyone that hasn't shown or doesn't want to go again in favor of new members.