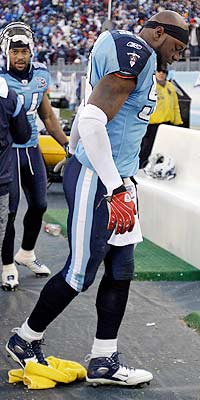 Both teams are rivals of the Colts. However, I'm sure we all got a laugh out of LenDale White saying he'd stomp on another towel if someone gives him one.

"If it happens to be there, I'm going to stomp all over that [pause], man," the running back told reporters after practice Sunday. "If there's a towel in the stands, I will stomp on it. I don't care who gets mad. ... If they throw a towel at me, I'm going to kick it and stomp all over it. If they don't want their towel stomped on, keep it out my face."

It's nice to see that ole LenDale is still acting like a douche. I wonder what teammate Cortland Finnegan has to say about LenDale potentially disrespecting the Steelers and their fans AGAIN. This is what Finnegan said about the towel incident last year, which involved known Titans douchebags LenDale White and Keith Bulluck:

Clearly, LenDale White does not care what Fisher or Finnegan think. I mean, he said it himself:

If there's a towel in the stands, I will stomp on it. I don't care who gets mad.

This is your open thread for tonight's game. Enjoy.

Behind The Steel Curtain