Know Your Colts History: Bustin' a Cap in the Cats

Share All sharing options for: Know Your Colts History: Bustin' a Cap in the Cats

Back in the spring and summer of 2007, when I first started writing here, I did screen caps from the Colts' Super Bowl XLI DVD and inserted goofy captions.  It wasn't really writing per se, but most of you seemed to enjoy it so I kept doing it for a few months.  Of course, there's only so much one can take from a DVD, so eventually I had to start typing complete sentences (with the occasional fragment or run-on) and using paragraphs and all that fun stuff.  I was pretty sure that the screen capping era of my life was over, but that was until I found NFL Game Rewind.

Not only do I get the chance to admire Peyton whenever I want, but because I can watch games on my computer, I can chronicle the Colts' season through screen caps.  Each week of the season, I'll give you the best moments from last week's game, and some random, commentary to go along with it.  Follow me after the jump to see what happened in Week 1. 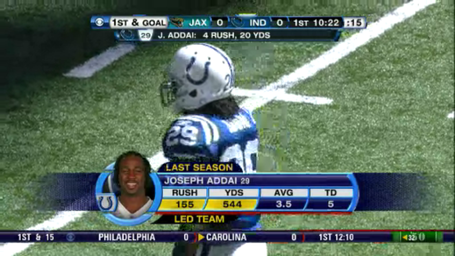 Before we begin, let's remind ourselves how dismal the running game was last season. 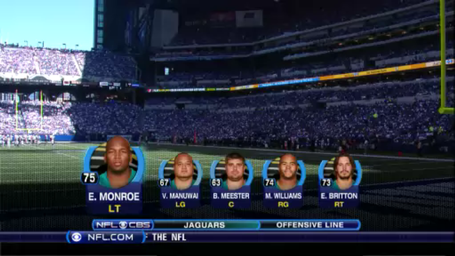 It's nice to see that CBS highlighted the player most likely to wet his pants during the game. 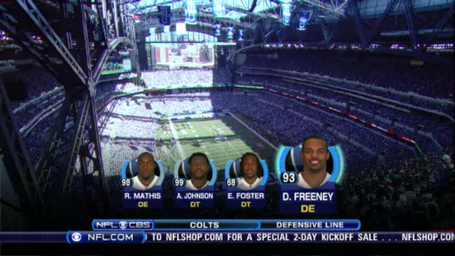 ...and the player most likely to cause that player to wet his pants. 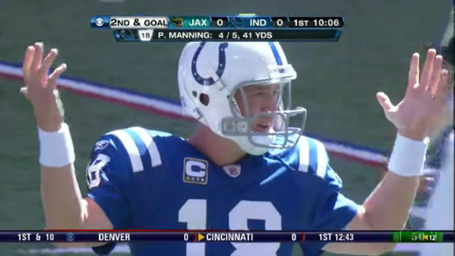 "Why do you have to practice your beatboxing on headset Tom?  I can hear you in my helmet!" 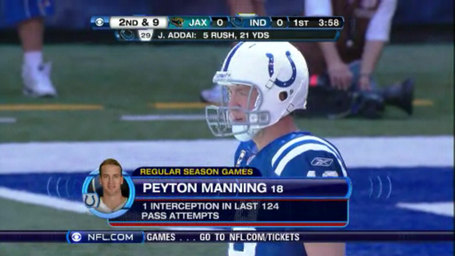 Would you have considered the producer any less of a man if he had said Peyton had 2 interceptions in his last 125 attempts?  I would. 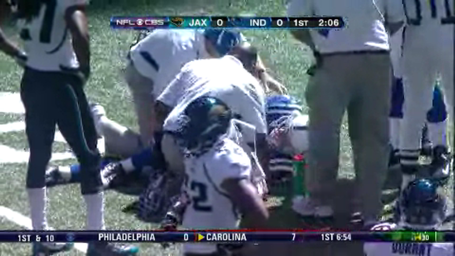 Trainer to Gonzalez: "If you don't find a way to suck it up and get back into this game, you're gonna owe me $100 for the fantasy team you just RUINED." 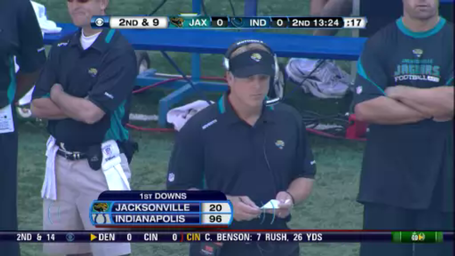 Last week, I predicted that stadium officials willonly open one side of Lucas Oil Field's roof after Jack Del Rio complains that he looks goofy wearing a visor.  I was wrong about only opening one side of the stadium, but I was dead on about that visor.

Also, congrats to Colts for picking up 96 first downs with 13 minutes to go in 2nd quarter.  I'm still a bit concerned that the Jags were able to get 20, but I can deal with that. 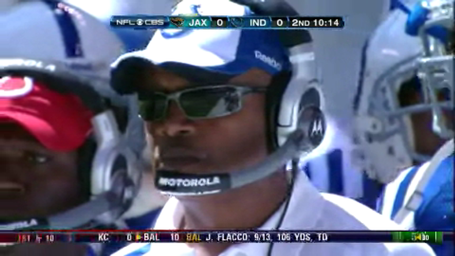 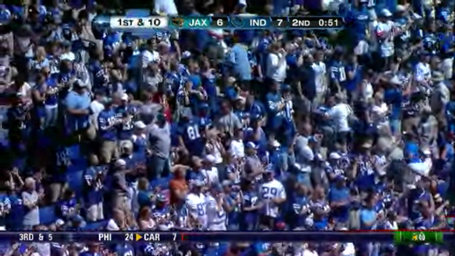 I do believe I spy a Brian Fletcher jersey near the middle of the screen.  Unless that's Pat Beach... 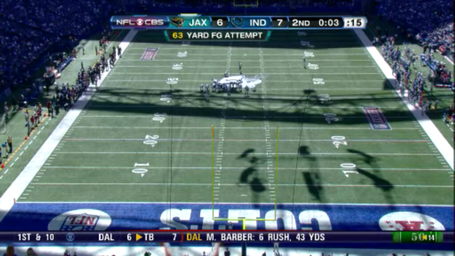 Sign #1 that your field goal is going to be a miss: You're kicking it from behind the mid-field logo. 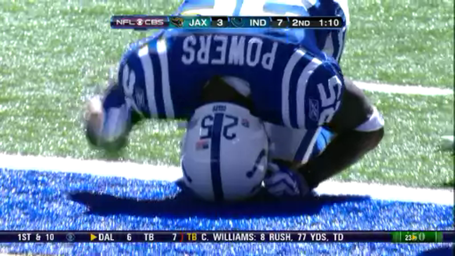 "NOOOOOOOOOO!!!!  Why didn't anyone tell me this grass was fake before now?  I was going to dig a hole at mid-field and bury my good luck charm in it!  Now what am I supposed to do with my lucky jock strap that I stole from Ryan Diem?" 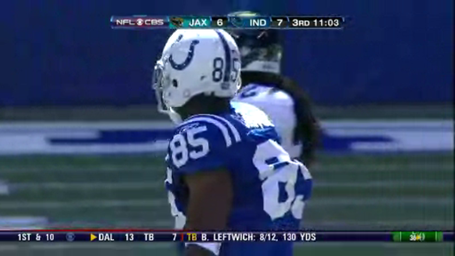 Pierre Garcon is day-to-day with a massive bulging disc in his back.  Steve Levy might tell you otherwise. 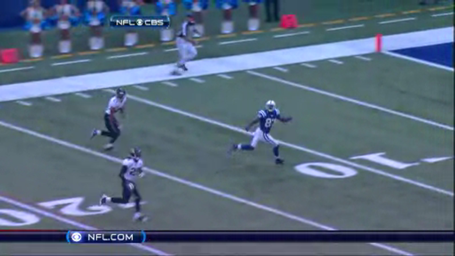 When you give a top-flite wide receiver that much separation, there's going to be a problem. 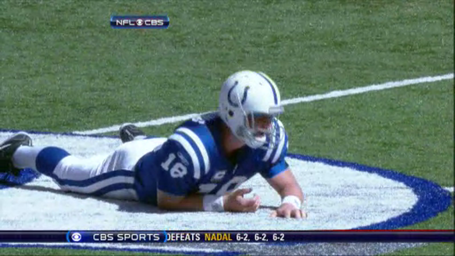 "Maybe if I crawl on my belly, I can see how Rashean Mathis positions his feet and I can figure out if he's blitzing or not.  Also, this might be my best chance to pull out that 'dead skunk' play I've been working on since high school." 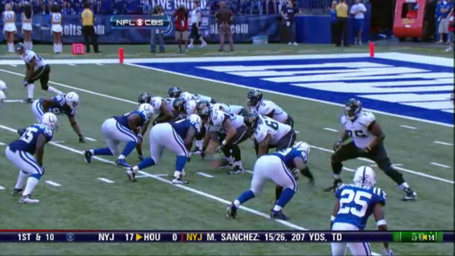 "CRIKEY!  MR. FREENEE IS PRIMED TO ATTACK AGAIN.  MAYBE IF I START IN A FALSE MANNER I CAN INCREASE MY CHANCES OF STOPPING HIM FROM PUMMELING MY QUARTERBACK!

BLIMEY!  THE REFEREE HAS CAUGHT ME IN MY MISDEED!  SURELY NOW I'LL BE PUNISHED BY MR. DEL RIO!" 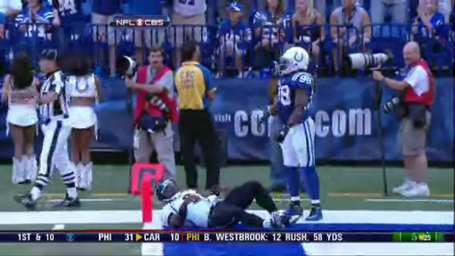 "Yo David, I'm really happy for you and I'mma let you finish, but...

Just kidding.  You don't get to finish." 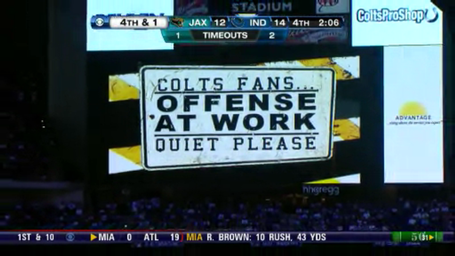 The original graphic was going to say "Shhh...Dallas Clark doesn't like loud noises" but Clark wouldn't have any of it. 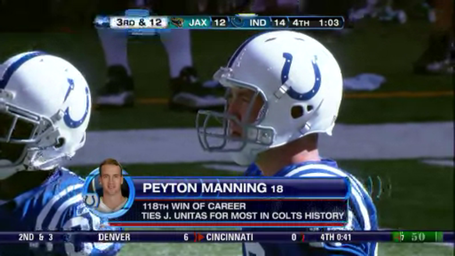 Yeah, that's some pretty good company to be in.  Being a Colts fan is awesome. 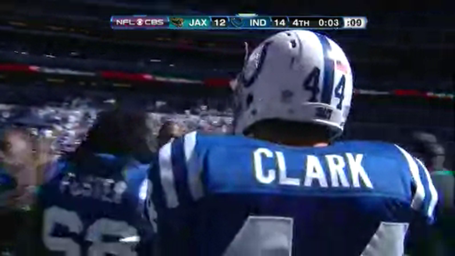 "Hey Eric, can you show me where the locker rooms are?  I forgot again."