Share All sharing options for: Know Your Colts History: The Dallas Clark Edition

Before we get into this week's screenshots, let me just hit one thing from last week: I don't hate Dallas Clark.  I never have, and I never will.  I think he's an incredibly goofy guy, but he's also an incredibly good fit in the Colts' offense.  That was no more evident than Monday night, when Dallas gashed Miami's defense far worse than the Wildcat gashed the Colts' defense.  If you still don't believe me, just check out my latest Facebook update: 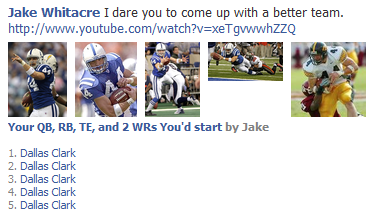 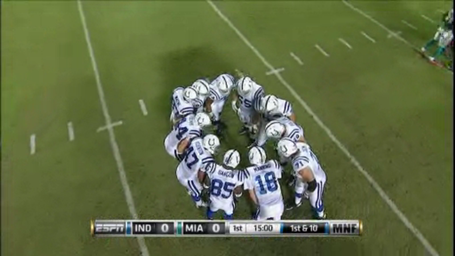 "Alright boys, I'm going to hit Dallas on the seam, we'll get a touchdown on the first play, Tiger Woods will slap me on the back, and then we'll go get some Gatorade.  Sound good?  Good." 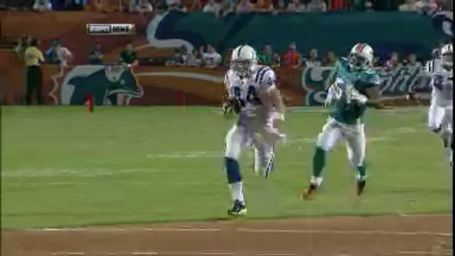 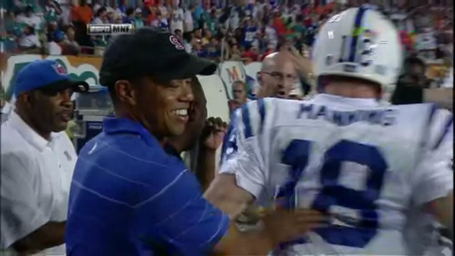 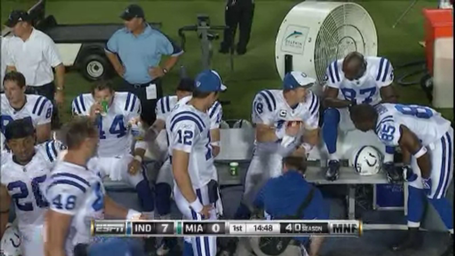 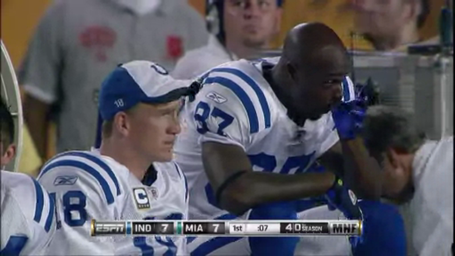 "Hey Reggie, can you tell me if Gloria Estefan or not?" 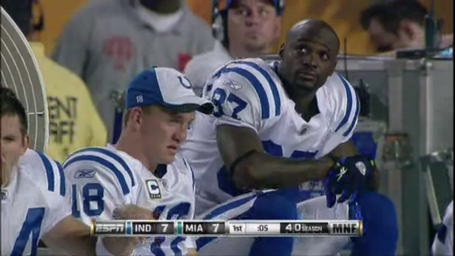 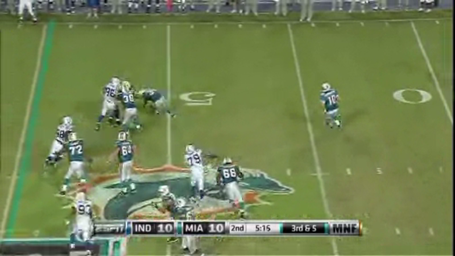 More proof of why Dwight Freeney is awesome.  Despite being tucked away at the bottom of the screen in this frame, he still manages to sack Chad Pennington, who is up in the top corner. 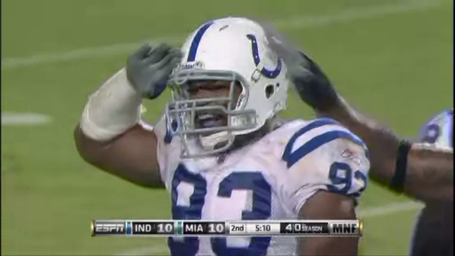 We should salute Freeney for that sack. 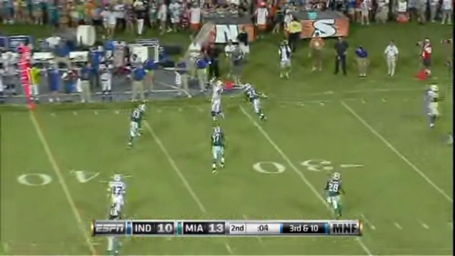 Now we're going to fast-forward to the end of the second quarter, right after Dallas Clark again gashed the Dolphins and set the Colts up for a field goal. 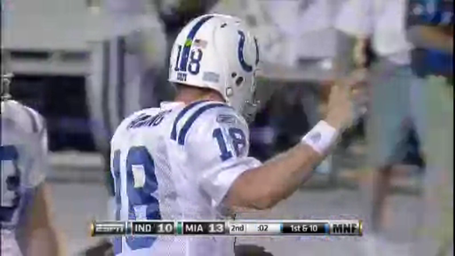 "Hey Adam, if you can bank it in off the pole, I'll let you drive my car home tonight." 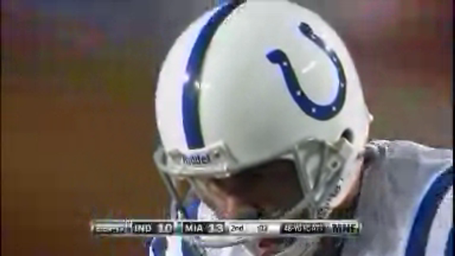 "Idiot. Those wheels are mine." 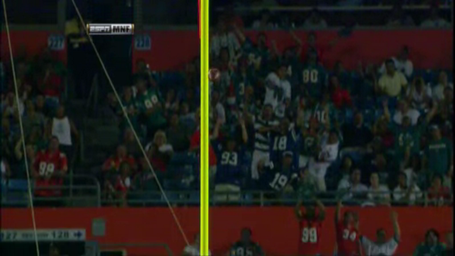 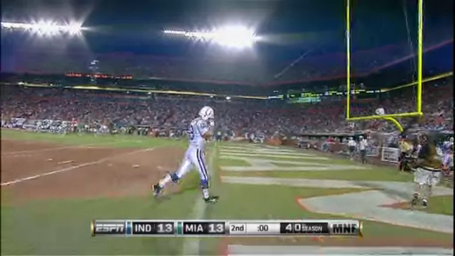 "Crap, crap, crap.  Now I have to get my keys and give them to the valet before Adam gets to them." 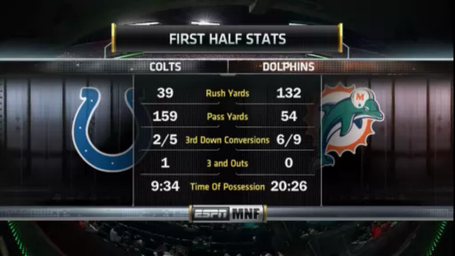 The sad thing is that the Colts only had the ball for 5 minutes in the second half. 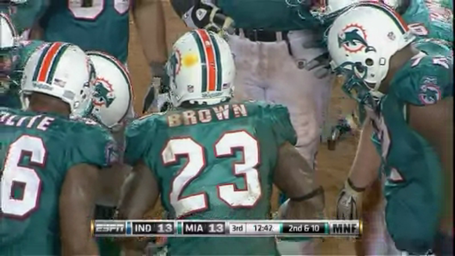 Sorry, I just wanted to pad our time of possession.  BREAK!" 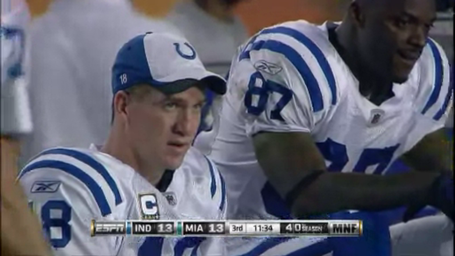 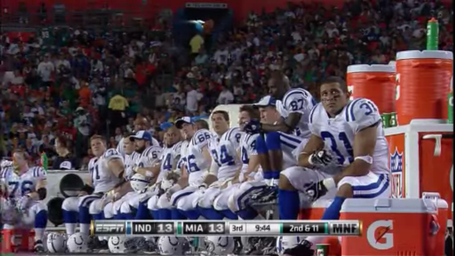 Only veterans get to use the benches.  Rookies like Donald Brown have to sit on the coolers.  The veterans are still willing to drink Gatorade from the coolers the rookies sit on, they're just not willing to reach for it. 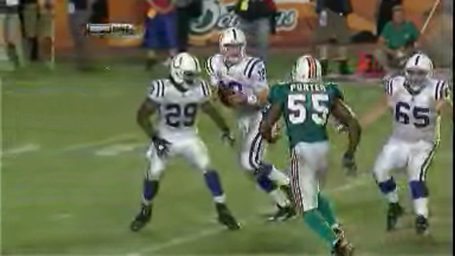 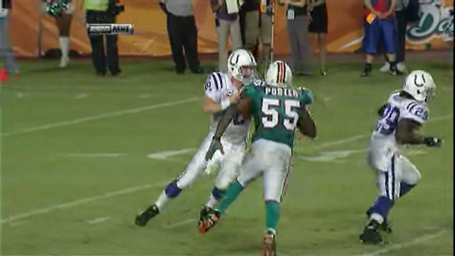 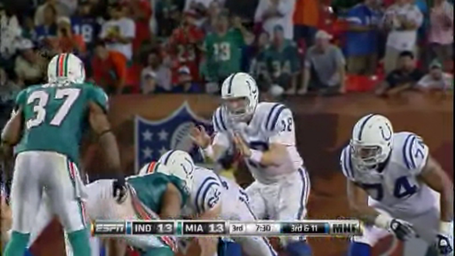 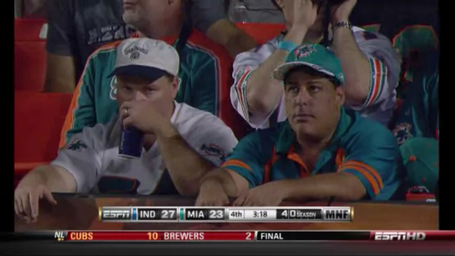 I was wondering what happened to Zach Thomas. 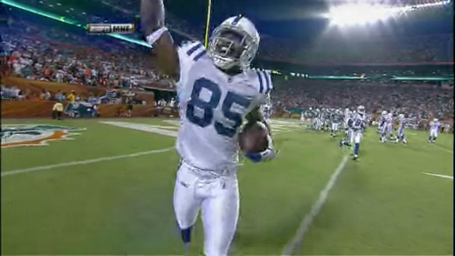 The only thing that would have made Pierre Garcon's first career NFL touchdown sweeter is if he had pointed to the luxury box that Serena Williams was sitting him.  You can probably guess what Serena told Pierre she'd do with the ball in his hand. 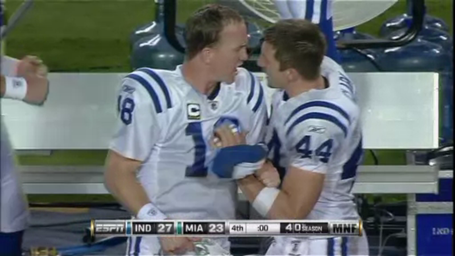 "YOU WERE A BIG PART OF THE WIN TONIGHT!  I THINK YOU SHOULD GET A GAME BALL!"

"THANK YOU!  I THINK YOU WERE EXCELLENT AS ALWAYS!"

"HEY PEYTON! WHY ARE WE YELLING DESPITE THE FACT THAT WE'RE STANDING RIGHT NEXT TO EACH OTHER?!?"

"BECAUSE I DIDN'T GET TO YELL ENOUGH ON THE FIELD TODAY!  ASHLEY ISN'T GOING TO BE HAPPY WITH ME THIS WEEK!"