It's only fitting that the play of the game in the AFC Divisional Round between the Indianapolis Colts and the Baltimore Ravens was made by a Haitian American. We all saw the play, and we will likely see it again and again in the near and distant future because big time, high effort plays that swing momentum back in favor of the winning team have a way of getting immortalized.

I'm speaking, of course, of the Pierre Garçon forced fumble on Ed Reed.

Needing a play to halt what was a dominant Colts performance as the third quarter was winding down, Ravens safety Ed Reed stepped in front of a deep pass for Pierre Garçon. The pass was off play action, and either Garçon ran the wrong route or Peyton Manning made a bad pass; or, perhaps a combination of both. Regardless, the turnover was exactly what the Ravens needed. Down 17-3, they had been dominated up until that point. The Colts had scored two impressive second quarter TDs, with the last one coming 3 seconds before the end of the half. Starting the third quarter, the Ravens were doing little to help their situation. They were stopped by the stout Colts defense at the Indy 45 yard line on a desperate-looking 4th and 3 play. On the Colts next possession, Manning went for the knockout, but Reed was able to jump the route and make the pick. At this point, the Ravens had a HUGE turnover in the hands their most dangerous return man (Reed), who was streaking down the sideline looking to score some points.

However, Reed hadn't counted on one player disrupting his chances of scoring. That player was Haitian American wideout Pierre Garçon, the player Reed had cut in front of to make the play. With the INT tucked into his right arm, Reed was cutting his way down the sideline at a speed other-worldly for a safety. The sideline was to Reed's left, but he had the ball in his right arm. Behind Reed the entire time was Garçon, who had never given up on the play. Garçon chased Reed down near the Colts 25 yard.

Then, he made the play.

As Reed slowed down to avoid a Colts tackler, Garçon swung his arm underneath Reed's and jarred the football loose. The ball popped out of Reed's arm and danced down near the 24 yard line. Colts tight end Dallas Clark was right there to scope it up and fall on it. First-and-ten Colts at the 24 yard line.

That play, right there, was the ball game.

The Colts took over and started gaining first downs, chewing up clock and forcing the Ravens to waste timeouts on their defense. On this same drive, Ed Reed would get another Manning INT only to have it nullified by an obvious Corey Ivy pass interference call on Austin Collie Dallas Clark (Ivy grabbed Collie, allowing Reed to make the pick). With the aid of Ivy's pass interference penalty, the Colts marched down the field on a drive that lasted 7:21 minutes, got inside the 5 yard line, but were stopped from scoring a virtually game-ending TD. They tacked on a Matt Stover field goal, making it 20-3 with 13:26 left in the fourth quarter. By then, it was pretty much over.

All of this started because of a big time, high effort, head's up play by Pierre Garçon, who was likely distracted all game long because of the earthquake situation in Haiti, affecting so many of Garçon's family and friends. That play goes down as an all-time hustle play in a memorable game that showed us Colts fans that our team does indeed have a stellar, playoff-caliber defense.

More breakdown after the jump. 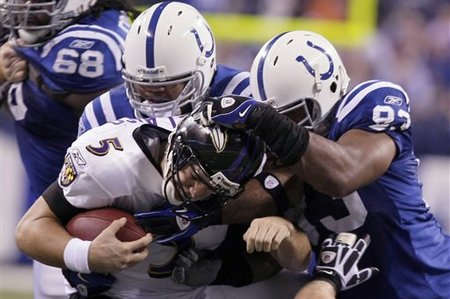 We are the hunters not the hunted!

That's Twitter maven Raheem Brock, posted just prior to the Colts victory over the Ravens.

This was the greatest defensive performance by an Indianapolis Colts team in the playoffs. Not since 1971 had the Colts held an opponent to 3 points for an entire playoff game. Heck, the Ravens were fortunate to get the 3. Late in the first quarter, Joe Flacco's goal line pass should have been intercepted and returned for a TD by Antoine Bethea. Instead, he dropped it, and the Ravens tacked on their only points of the game. Bethea would redeem himself in the fourth quarter with a game-ending INT at the Indy 39 yard line 2 yard line.

The Colts defense was so dominant that for the entire second quarter the Ravens did not record a single first down. During the third quarter, the Ravens first two drives resulted in a punt and a turnover on downs. It was after this that the now-famous Garcon forced fumble occurred.

The defense was so great I was almost shocked by it. Other than the run in the 2006 playoffs, or perhaps the first eight or so games of the 2007 season, I had never seen a Colts defense like this. It wasn't just the "fly to the ball" mentality instilled by the great Tony Dungy, who was on hand at the game to see his friend and successor (Jim Caldwell) get his first playoff win; and on Caldwell's birthday, no less. This defense was in attack mode all night. Whether it was stunts by Dwight Freeney or stand-up pass rushing from Raheem Brock, there always seemed to be someone rushing or hurrying Joe Flacco. While the only sack of the game for the Colts was recorded by Gary Brackett, that is actually a credit to Flacco. He did a fine job getting rid of the football, especially with so much pass rush hitting him.

Obviously, with any playoff game, all plays are magnified and demand further dissection. We haven't really talked about how amazing Peyton Manning was in the second quarter. We haven't praised Jim Caldwell's bold decision to go for it on 4th and 4 from the Ravens 35 yard line; a decision that would pay off and lead to the Colts first TD of the night. We haven't praised Pat McAfee at the special teams, who were outstanding in controlling field position all game long.

We also haven't talked about how the rest seemed to make these Colts players fresh, allowing them to fly all over the field. 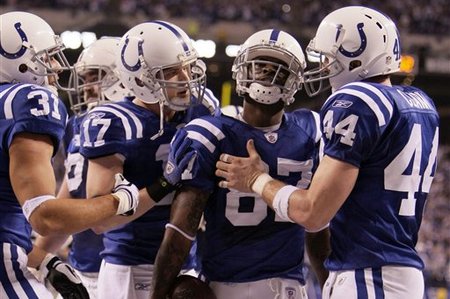 When all is said and done, this was one of the more impressive games I've ever seen the Colts play. Was it "perfect?" No. The running game was a joke, in particular Joseph Addai, who injured his shoulder in the game. But when you win 20-3 against a very tough opponent, harping on things like that seems petty. For now, we focus on winning a very important playoff game at a time when the Colts and their fanbase were at a bit of a crossroads. In some ways, this win validated Bill Polian's policy of rest over "meaningless games."

Oh, and momentum is indeed "over-rated." This game proved that.

Special thanks to Bruce and the classy fans at Baltimore Beatdown. Seriously, I mean that. Baltimore fans and Indy fans have a long history of hatred for one another. However, when we held a Q&A over there, and when Stampede Blue contributors commented in BB open threads, Baltimore fans were funny, knowledgeable, and (most importantly) not jack-offs. Big props to the Ravens and their fans.

For the Colts, they now move on to the AFC Championship Game. They will face the winner of the Jets v. Chargers game. Prior to this win, the Colts were 0-3 going into a playoff game as a #1 or #2 seed. This win was an impressive way to overcome that horrible 0-3 stat, and it was done with a total team effort.

However, though the team, united, won this game, we give the final props to Pierre Garçon, the Haitian American from Division III Mount Union. He had a heavy heart heading into this game. If 50% of his thoughts were on the Ravens, I'd consider that "focused" under the circumstances. The land of his family is decimated under a pile of rumble. Tens of thousands are dead. People are still trapped under concrete and steel. Meanwhile, Pierre was playing football.

You're a true pro, Pierre.

Click the Haiti flag to donate to relief efforts