Know Your Colts History: The battle that was over before it began

Share All sharing options for: Know Your Colts History: The battle that was over before it began

I know there has been a lot of back-and-forth on the decision to bench the starters in last week's game against the Jets, as there should be.  Regardless of where you stand on the decision, I think we can all agree that everyone involved in the decision-making process was in a no-win situation.  Additionally, you have to give props to Caldwell and Polian for having the resolve to stay true to their convictions, even in the face of sharp criticism.  Even if the gamble doesn't pan out, I have to respect the depth of their convictions.

Also, let's keep in mind that we're arguing about the decisions of a team that's 14-1, rather than chronicling the failures of a team out of the playoff picture.  At least we're not trying to the bottom of allegations to figure out if two Colts pulled guns on each other.  But that's enough about my life, after the jump we'll take a look at some choice screenshots from last week's game. 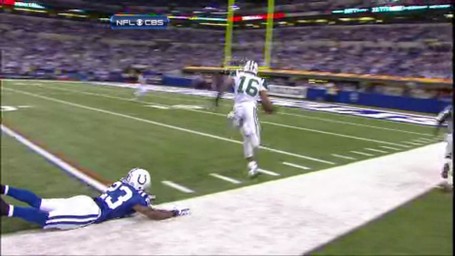 Welcome to this week's episode of "Bad times to fall flat on your stomach", starring Tim Jennings. 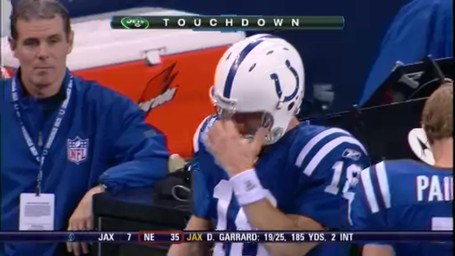 "If I claw my face reeeeeeeeeeealy hard after the Jets score a touchdown, maybe the coaches will let me stay in." 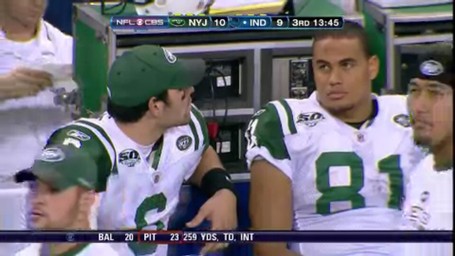 "You went to Purdue, right?  What's this Curtis Painter guy like?"

"I don't know man, I just sat by him during film study.  I had no idea he was the guy throwing the ball to me all that time." 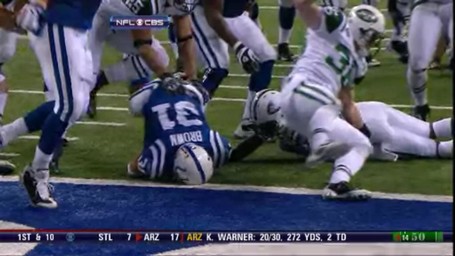 Donald Brown: Just can't get ahead in life. 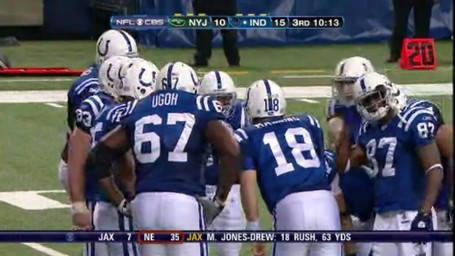 "Alright guys, just in case this is the last time we huddle together for a few weeks, I just want you guys to know...that it couldn't have come at a better time.  Reggie, the way you keep putting that mouth guard in your face mask is annoying the crap out of me.  And Tony, you should really consider seeing someone about that odor.  It's been five weeks and nothing has gotten better.  Nothing." 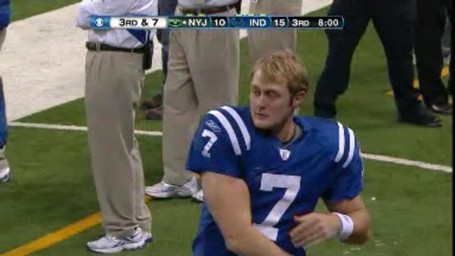 If you can spot the person in this picture who is about to be scarred for life in his first NFL playing time, you're a winner!  Especially if you're the Jets. 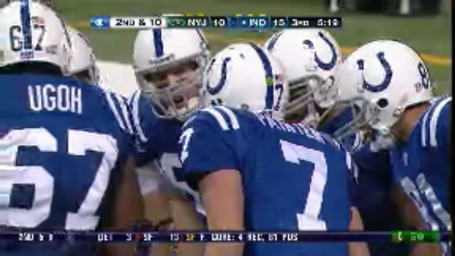 "Okay guys, we might be a little shorthanded, but we can still pull this thing out!  Who's with me?

MEANWHILE, ON THE OTHER SIDELINE... 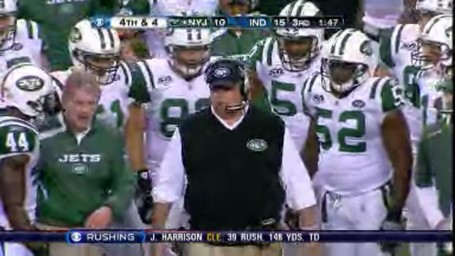 "Come on, boys! Those white flags are no match for our muskets."