Nice to see some people are finally getting it. This is from WEEI's Kirk Minihane:

But Brady has the best single season of the two, right? That plus the 14-4 playoff record plus the (for the moment at least) two extra Super Bowls is enough, isn’t it?

True, Brady broke Manning’s TD pass record in 2007. He threw 50 TDs to Manning’s 49. But he needed an extra 81 passes (over two games worth) to get to 50. Manning’s TD percentage was higher (9.9 percent to 8.7 percent, which means that Manning would have finished with 57 TD passes had he attempted the same amount of attempts as Brady did in 2007), as was his passer rating (121.1 to 117.2). Both great, great seasons, but I don’t think anyone could really state with any confidence which was the better one.

The case is closed.

Peyton Manning is the best quarterback I've ever seen.

Still hurts to write it.

It doesn't hurt as much as us hearing for years from you jokers that Peyton Manning was a goat-faced choker who couldn't win the big one. And even though it took you seven friggin' years to come around to the obvious fact that Peyton is pretty damn good, we will give you props for at least getting there.

Next up, Cold Hard Football Facts and douches like Dashiell Bennett at Deadspin will hopefully come around. If they don't, whatever. Haters gonna hate, I guess. 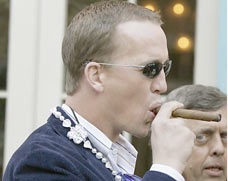