People Start Piling On Pat McAfee For Getting Drunk, Swimming In Freezing Canal

Share All sharing options for: People Start Piling On Pat McAfee For Getting Drunk, Swimming In Freezing Canal

Wonder if Peyton Manning will dust of his "liquored up, idiot kicker" line from 2003 and apply it to his punter.

That McAfee was all alone and piss drunk at 5 a.m. on a Wednesday? Because that seems sort of perfect for a punter. That he made the textbook drunk decision to swim in freezing cold water? Or maybe it's his explanation for being wet—because, you know, it wasn't raining.

Then again, it's also pretty great that this comes less than a week after our Colts blog wrote a lengthy post explaining that Pat McAfee is not a "liquored up" kicker like Mike Vanderjagt and past Indy hooligans. Um... Awkward.

According to the police report, cops asked the kicker how much he had to drink -- and he replied, "A lot 'cause I am drunk." McAfee continued, "I know I am drunk, but does that mean I cannot walk home?"

When I was younger, the Broad Ripple Canal was drained and all manner of items could be seen on its muddy bed – shopping carts, bottles, etc. It wasn’t clean then and with its greenish hue, doesn’t look much more clean today.

Which is why I would never advocate swimming in it. Even when you’ve had a long night out in Broad Ripple, as Colts punter Pat McAfee appeared to have on Tuesday.

There’s a fine line between comedy and tragedy. And though I’m sure no one is laughing in the Indianapolis Colts’ front office today, most would have to admit, the story of Pat McAfee taking a drunken swim in the pre-dawn chill shortly before 5 a.m. this morning in the Broad Ripple canal has its humorous elements.

Like McAfee telling police he was wet because it was raining. But it wasn’t raining, and McAfee’s shirt was in the canal. Certainly the Colts’ second-year kicker isn’t an accredited meteorologist. He’s not even a very good liar. Indianapolis is darn near in the midst of a drought for crying out loud.

After the jump, we have Pat's mugshot. 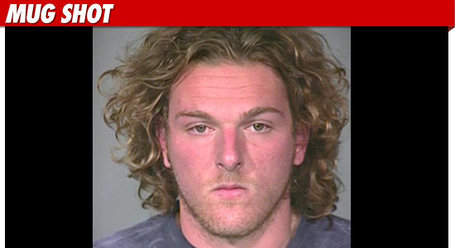 Yeah, this is embarrassing for Pat. According to the Indianapolis Star:

McAfee was taken to the Adult Processing Center downtown, where he likely will appear in court at mid-afternoon and be released on his own recognizance, said Julio Fernandez, a Marion County Sheriff’s spokesman.

It usually takes about eight hours to be processed into jail. McAfee would have to wait until he sobered up before he could see the judge, Fernandez said.

Despite the 'awkwardness' of me writing an article proclaiming Pat McAfee is not a 'liquored up kicker' two weeks before Pat's early morning dip in the Broad Ripple Canal, as the old saying goes:

This too shall pass.

Pat's a good guy who made a very stupid mistake. Yes, he's going to get ripped for it, and he should. The Colts sell themselves to fans as the upstanding, 'Apple Pie' team. They don't tolerate 'bums' on their team, and make it a point to 'emphasis character' when they bring people onto the team. This appeals to Midwesterners. Always has.

It's why the Indiana Pacers have had such a hard time getting people to care about them these days. Losing a lot doesn't help either.

By McAfee getting pretty insanely drunk and doing something pretty whacked-out-bonkers-stupid before the cops hauled him away in a paddy wagon, his arrest flies in the face of what the Colts 'sell' to fans who enjoy rooting for a 'moral' team. This on top of John Gill's and Fili Moala's alcohol-related arrests earlier this season, this third arrest sort of makes this a real problem that the Colts must deal with.

From Anthony Schoettle at the IBJ:

We’ll see how Colts fans will react. Winning has a way of soothing city residents’ ire over such incidents. But make no mistake, a number of high-profile misdeeds by professional athletes in this city has made sports followers hyper-sensitive to such things.

While the fans might forgive—as long as the team is winning—they won’t soon forget. A bevy of bad will simmering just below the surface of a Super Bowl contender could come back to bite the team when they’re not so good.

One thing is certain. Irsay and Polian know how hard it is to build a team’s image, especially in a relatively conservative city like Indianapolis.

McAfee's arrest, coupled with Gill's and Moala's, also undercuts the authority of head coach Jim Caldwell a little bit. I mean, did we ever have a season under Tony Dungy or Jim Mora where three players in a three month period were arrested for alcohol-related offenses?

In the end, the team will discipline Pat and everyone will move on. I personally still like the guy, though I think he should probably lay off the sauce for a while. Oh, and woe betide the next Colts player arrested for being drunk in public this season. Unless his name is 'Peyton Manning,' if a fourth guy is arrested this season I would not be surprised if Bill Polian out-and-out cuts him just to send a message.