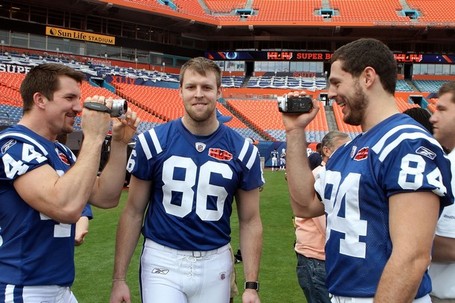 With all the discussion this year about the Colt players that are under performing. It’s time to step back and take a look at one of the contributors who haven’t been appreciated enough. Since Dallas Clark went down at the end of the Redskins game in week 6, Jacob Tamme has come on the scene like a man possessed. In only his first season as a starter (previous two spent on special teams) he’s accounted for: 60 receptions, 564 yards and four touchdowns. If you to project those stats over the course of a 16 game season that comes out to: 107 receptions, 1,003 yards and seven touchdowns. When compared to Clark’s stats last year: 100 receptions, 1,106 yards and ten touchdowns, the production is very limited in any drop off.

So, you can get an idea of how big of a steal Bill Polian got with Jacob Tamme and how important he’s been to this organization. I like to essentially close my comparisons by showing you were Dallas Clark was at his third season in the league. In 2005, Clark started 14 games (15 games total) and had 37 receptions, 488 yards, and four touchdowns. What Dallas Clark accomplished in nearly a complete season, Jacob Tamme has put up in a matter of 9 games. Does this make Tamme a higher caliber player than Clark?... No. But, we now can clearly see why it is announcers like to coin the nickname Jacob Clark.

Next year will be interesting to see if the Colts will utilize both Clark and Tamme. Will they add some new packages to the arsenal intergrading both on the field together? The Patriots have found ways to advantage themselves with two potentially elite Tight Ends, and we know just how good that situation has been for them. They even figured the mismatches were so much towards their favor; they didn’t even need a high paid player like Randy Moss anymore. Jacob Tamme is still developing and has a bright future in a Colts uniform.

Yet, I’m still left to wonder if the coaches decide not to put them both on the field in some fashion. Therefore placing Tamme back on the bench, this would reflect on how idiotic management has become. My only plea to the Colts would be either adjust and dominate or trade Dallas Clark and go with the younger weapon. He’d cost less and has proven to withstand the workload. I believe the Colts could than in exchange, receive either two 2nd round selections or a 1st and a lower round selection. I for one do not ordain the second option but, wouldn’t mind retaining more draft picks. Especially, since the Colts only have 6 selections (trading for Justin Tryon). We also are yet to know which of the 4-7 rounds are missing. The one position the Colts won’t have to worry about is depth at Tight End with Dallas Clark, Jacob Tamme, Brody Eldridge, and possibly Tom Santi. But, if the team chooses to look at building for the future, the time to start is now while the position is loaded.

What should the Colts do with their TE situation?