People bash Peyton Manning because it's fun... and because they have no life

Share All sharing options for: People bash Peyton Manning because it's fun... and because they have no life

The annoyingly obvious result of a Peyton Manning Colts team losing a Super Bowl is the inevitable haters that will crawl out from their hiding places and throw their own dung at the best QB in football. Again, none of these cowardly buffoons had the stones to bash Manning when he was carving up the Ravens, Patriots, Jets, and pretty much everyone else in the NFL in 2009. But, after throwing for 333 yards and a TD (88 QB rating), the haters come out of the woodwork to attack Manning for throwing an INT with 4 minutes left in a game, calling him the same names he's been called since he entered the league in 1998.

As I have always maintained, such people are losers who likely do not get laid on a regular, consistent basis, and thus need to let out their anger and aggression at something beautiful. And, what is more beautiful in the NFL than Peyton Manning? For loser-football-Manning-hater fans, like this guy, they choose Peyton Manning because he is an easy target and because the guy throwing for their team is so obviously inferior that they need to tear down the Great Peyton rather than, you know, hold their own guy to a higher standard.

Per usual, when we need sage football advice from somebody who knows what they are talking about, we go to Trent Dilfer.

Show me a better on-air TV analyst. Show him to me! Dilfer was a VERY welcome change to the Sean Salisbury element ESPN had polluting their already bile-filled river of content. Dilfer is the flower drifting effortless down that bile river. Yes, I just called Trent Dilfer a flower.

From Don Banks at SI.com:

"The thing is, I would argue it was a much better play by Porter than it was a bad play by Wayne and Manning,'' Dilfer told me. "I'd say it was about 80-20 in that regard. The thing that [ticks] me off is that we have so many different platforms to explain the game to people, and yet they still don't seem to know that you can do things right as a quarterback at times and still have things go badly.

"Other guys make good plays too. I've seen that interception now on film, and I've seen the replay a million times. I've talked to coaches on the [Colts] staff. Porter jumps the pattern. He's recognizes the pattern, and he jumped the throw based on his film study. It was a great play by Porter based on being prepared. That happens in football. The other guy can make a better play than you make.''

You see, for idiots like this guy, it's not about "analysis" or "recognizing patterns" or educating the public on the game of football. Nobody supposedly cares about that. This is all entertainment, not "journalism" or anything like that. It's much easier, and generates more eyeballs to the screen, to boil everything down to silly catch phrases like "The QB choked," or "Roethlisberger is better than Manning."

You know, dumb crap that makes no logical sense, but is written and said anyway because it's "edgy."

I apologize for the language, but not the intent. We are all surrounded by idiots in our daily lives, from the boss who asks you to do his work for him to Jets fans next to you in the bar who says that Rex Ryan is the next Bill Parcells. Rather than kindly and passively ignoring their obvious stupidity, it is sometimes best to point a finger at that somebody, call them a f*cking idiot to their face for their opinions that they share with you without you even asking for them, and walk away from them as their stare at you, stupefied that anyone DARED to call them out on their BS.

Again, this goes without saying (but I'll say it anyway, because no one else is): We Colts fans make no apologies for Peyton Manning because no reasoned, logical football fan needs to make apologies for greatness. He is the best, period. He defines greatness. Anyone who disagrees is either a Patriots fan or an idiot.

Logical and simple to remember... unlike anything written by Jason Cole.

Peyton has kicked far too much ass for 12 years for we Colts fans to apologize for it. In a league where multi-million dollar players are routinely called out for being lazy, stupid, and uninterested in winning, the guy running my team's offense lives and dies with every loss. Every tiny little mistake he makes he kills himself for, and he never, EVER is satisfied with anything he does. 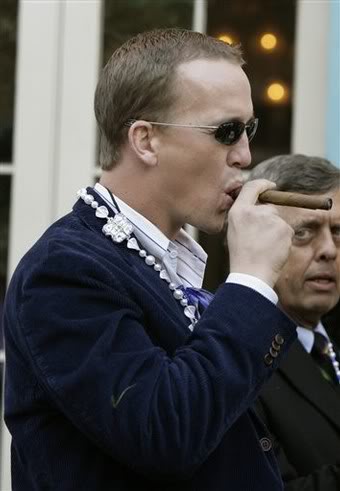