Stampede Blue at the Super Bowl: Our chats with CBS Sports analysts

Share All sharing options for: Stampede Blue at the Super Bowl: Our chats with CBS Sports analysts 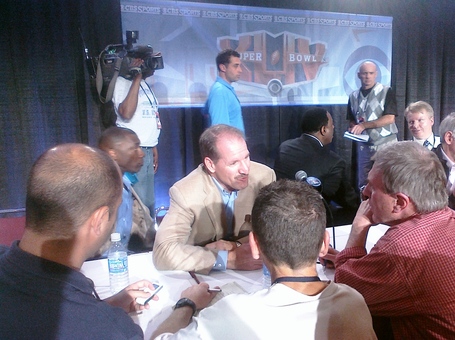 Bill Cowher, moments before BBS descended upon him

Yes, even Shannon Sharpe, who many of us have irrationally shouted at when he's talked at us through a TV screen, was probably one of the nicest guys I've chatted with while being here. He not only answered my questions with honesty, he didn't give me canned answers. I respect that. For many of you, you absolutely will NOT like what he has to say.  And for me personally, I don't agree with some of his opinions. However, I give him credit: He's honest. Most guys just give you talking points.

Because of how the event started, with the analysts focusing a great deal on how the NFL has changed, many of my questions were focused on the rules regarding pass interference, tuck rule, illegal contact, etc. Hope you enjoy.

BBS: Let's talk about Peyton Manning. How has he changed since when you played against him in 1999?

Dan Marino: He’s changed over the years, and the game has changed where the rules have changed. He’s adjusted to all that. I think its just his ability to control the game, call plays at the line of scrimmage, he's like a coach on the field; so accurate. And the other thing to me that’s so impressive is he's lost guys; Marvin Harrison leaving, a guy he relied upon for so many years. And now, you got new young guys he taught in the off-season. They had great numbers this year. Being able to adjust to new personnel is part of the NFL these days, and he’s done it great.

BBS: What kind of numbers would you have put up in the modern NFL?

Dan Marino: 6,000 yards easy! Behind my back! I can say that now. I will say that dealing with the personnel is different. I look at film sometimes and there's times where guys don’t get touched going down the field, and it makes it look too easy. But, that’s the way the rules are. So, the way the rules are, that's how you play it.

BBS: Is that what you tell young QBs? That it was much more difficult back in the day?

Dan Marino: It's still difficult, obviously. And its all about pressuring the quarterback. And I think that’s why you're seeing more blitzing and exotic defenses because of that fact; because you can't hit [receivers] going down the field. So, trying to get to the quarterback quicker, before he can make decisions, if you can’t really cover [the receivers], it's the way to go.

BBS: Has the NFL changed for the better with teams passing for more yards?

Cowher (hestitates): Yeah, I mean… I think I still like have the different styles. I don’t think there is any one way of getting [to the Super Bowl]. I think you do have the two best football teams, with their body of work, playing [in Super Bowl 44]. But I do still think you can win a championship by playing defense and running the ball. You have to throw. Trust me, that still becomes a part of it. But, you know, still playing some good, old-fashioned, disciplined, tough, hard-nosed football is not a bad way to win.

BBS: So tough, physical defense hasn't gone out of style?

Cowher: I don't think so.

BBS: Is parity good for the NFL?

Shannon Sharpe: I think that’s why the ratings are going up because everybody’s team can compete now. Whereas before, if you were in Arizona, would you watch the Cardinals? If you were in New Orleans, would you watch the Saints? Now, [fans are thinking] my team is good! I’m gonna stay home and watch them. I don’t know when this is ever going to happen again, so I’m gonna stay home and I’m gonna watch my team. I’m gonna go to the sports bar and watch my team. The thing about football, unlike any other sports, is that on any given day one team can beat another team. I mean, Tampa. They went to New Orleans and beat New Orleans!

BBS: But it wasn’t that way when you played.

Shannon Sharpe: No! No. No. No. No. You never saw the Falcons go to San Fransisco and beat San Francisco when they had Jerry Rice and Joe Montana. It just didn’t happen. You didn’t see the upper echeleon teams lose at home to the lower level teams. It just didn’t happen. Now, it doesn’t matter! It doesn’t matter who you are. A team can come in, and they can beat you. But, I really think that has a lot to do with the [increased] ratings just for the simple fact that the last couple of years we saw a New England team go undefeated through the regular season. And we thought, we’ll never see that again. I really and truly think that if Indy had played their starters the last two games they are right here, right now, with a chance to go 19-0 and win the Super Bowl. But, I think parity has helped because it has gotten more people involved because now people say my team is relevant now.

BBS: So, you don't agree with the Colts decision to rest starters in Week Sixteen and Seventeen?

Shannon Sharpe: I don’t see what it accomplished. You don’t get a guaranteed birth in the Super Bowl by resting starters. No matter how you take it, whether you look at the season as a 16 round fight, you take it in quarters, you always tell yourself you want to be 4-0 or you want to be 1-0. I've never had a coach get up in front of me and say, you know guys, if we lose this game, its ok. I'm not gonna be disappointed. Because there are times as a player, there are times I go out there and I'm not 100%. And I might take a painkilling injection so I can be out there on that football field. And I want to play, and you tell me "no?" I would have had a problem with it becaue resting doesn’t guarantee that I'm goinna be there. Now, [the Colts] ended up [in Super Bowl 44], but lets just say, for the sake of argument, that they lose the game. Are they losing because they rested the players? I mean, you just open yourself up for a whole bunch of other questions. You see, you try and dodge one road bump about answering all the questions about going 16-0, and then you open up another road block because, ok, you know you could have been 16-0.

BBS: But didn't the rest help them beat the Baltimore Ravens in the Divisional Round?

Shannon Sharpe: No, [the Colts] were just better! Baltimore can’t score. You have to be able to score points to beat Indy. I don’t care how great how your defense is. Peyton will solve it sooner or later.

But, we’ve seen him score 30 points and only have the ball for 15 minutes. So, he’ll solve you sooner or later. But, if you’re kicking field goals, you’re not going to beat him. And, the Ravens scored 3 points. You’re not going to beat Peyton Manning with 3 points. The Jets got off to a great start in the first half, but they couldn’t sustain it. I think [the Saints] can sustain it. I think the New Orleans Saints can put points on the board. And if Dwight Freeney [is out]… you’re talking about taking away the best defensive player on both sides. He’s the best defensive player in this game, now he’s gone. Bushrod is sleeping real good right about now. He’s sleeping like a baby right now!

BBS: What have the modern passing rules done to change the NFL from when you played?

Boomer Esiason: Well, that’s the thing, for some reason they attach 300 yard games to us when we used to play. And 3,000 yard seasons, that was the norm. If you made that, you were a success. If you completed somewhere between 56 and 60 % of your passes, that’s the way you played. The guys who played before us, [it was like] 50% of their passes and 2,500 yards. So, it has evolved. A 300 yard game would be nothing now. But, when you see Brett Favre complete 26-30, or Peyton mManning 35-49, its not unheard of. Its expected.

Boomer Esiason: Well, he’s doing it at age 40 because… even though [Favre] did get hit in this last game, and he got hit cheaply, I might add, the fact of the matter is that Dan [Marino] is right, they don’t hit them as much. They protect them. It doesn’t mean they can't get hurt because guys still get hurt. But, if you know what you are doing on the field, and you know where to go with the football and you are comfortable in your offense, you should be able to play until you are 45 years old.

BBS: Have the modern passing rules helped the NFL?

Boomer Esiason: The NFL has always been popular. But, the popularity over the last five years, the explosion of fantasy football, I think has really gotten the NFL to the level it is at right now. And obviously, the economy hurting right now and people not going out as much and staying home and spending more time in front of the TV has helped the TV ratings. But, I also think the offensive nature of the game has really helped the TV ratings ratings because people want to see exciting football, and that’s what they’re getting.