Share All sharing options for: Super Bowl Road Trip: Driving Through the Great Virginia Blizzard of 2010

This is the journey, a pilgrimage if you will, of a loud mouthed Colts fan as he drives 1,290 miles south from New York to Miami to cover his beloved Indianapolis Colts in Super Bowl 44. These are his adventures along the way.

Because of my media obligations and the craziness since I arrived in Miami Monday night, I have not had time to post about my very fun, very memorable adventures driving from New York to Miami to cover Super Bowl 44. Oh sure, I gave a few updates along the way, but the real meat of my trip happened when I had to drive through one of the worst blizzards ever to hit the Commonwealth of Virginia.

The story after the jump occurred three days ago, and it involves me driving through conditions so harsh, so frightening that I literally feared for my safety and the safety of other people on the road with me. Seriously, when the visibility in front of you is less than seven feet and you do not know where the earth ends and the sky begins because everything is THAT white, it's a tad nerve-wracking. However, despite the blizzard and the intensity it created, the experience of the event and the chance to meet the people I did was worth it.

Like in other moments of near-crisis, I was fortunate enough to be around tough, skilled, diligent people who wanted to help others get out of the harsh weather and into a safe environment. After it was over, I got a chance to thank some of those people and talk a little football with others. Hope you enjoy the story. 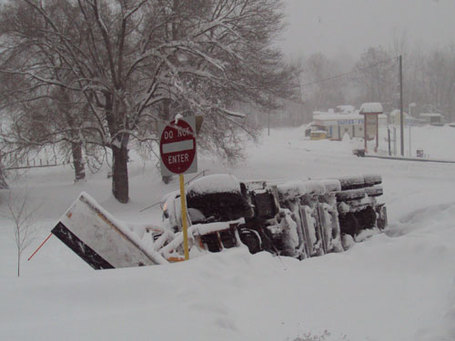 The patch of I-95 from Washington DC to Richmond, VA is a streak of road I shall remember for the rest of my life. Never before have I driven in conditions so terrible I literally did not know where the road ended and where the sky began.

I left DC at 9am, picking up a rental from Dulles airport. Bill the Skins fan, who I wrote about in this story, was kind enough to drop me off, and while leaving he told me to be careful driving. Severe weather was predicted to move through much of Virginia and North Carolina; snow, wind, ice, the works. I've driven through stuff like that before. I am from Indiana, after all. I've also driven through Nor'easters in Massachusetts and Vermont. Snow and ice are manageable if you are careful and not trying to be a road prick (ie, pass everyone you see).

Right as I get off the DC beltway, it begins to snow. This was, of course, a sign from a higher power, or something along those lines, because the snow literally did not let up at all from that point forward. In fact, the further south I drove, the snow fell in larger quantities. Oh, did I also mention that I'd left DC without eating any food or drinking in coffee? Yeah, I'm a bright one. 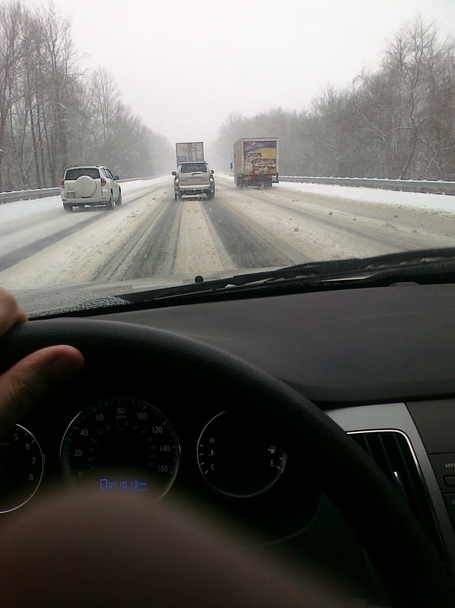 Snow just outside of DC

About 30 miles north of Ashland, the snow is starting to get my attention. I'm listening to Sirius-XM Radio and all the NFL talk shows when I start to notice that the highway is no longer gray with white and yellow lines. Instead, it's just white. In fact, the highway is so white that the car does not like it and is beginning to loose traction. And my car isn't the only one.

The snow fall is now very intense. I've never seen a fall like this. The sky is invisible, completely covered by a blanket of white. Visibility is, maybe, 15 feet in front of you. Cars are driving 35-40 miles an hour on a highway built for 70. At is now that the accidents are beginning to pile up. Cars are spun off, totaled, or tipped over off the side of the highway every quarter mile or so. Semis and other trucks are off-road, strained in the enveloping white. I reach Ashland and have one of two choices: Try and bunch there for the night, or push on 20 miles to Richmond. Driving any further south of Richmond is not an option. 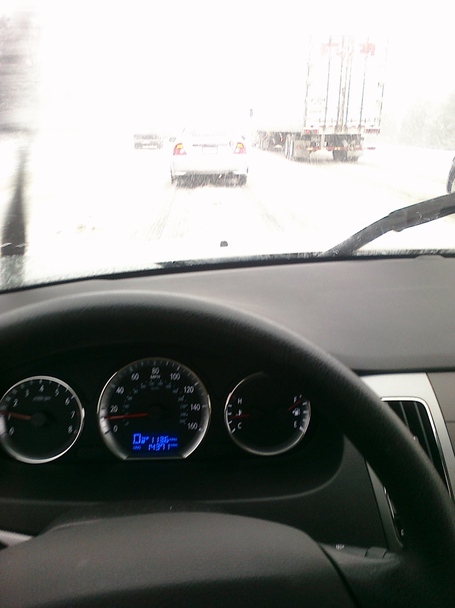 Fortuitously, I follow an ambulance from Asheville to Richmond. His lights and his cab are big enough for me to see seven feet in front of me. seven or so feet was the visibility at that point. The road is gone. The sky and the earth have merged into one. If not for the ambulance, I would not have had any bearing. 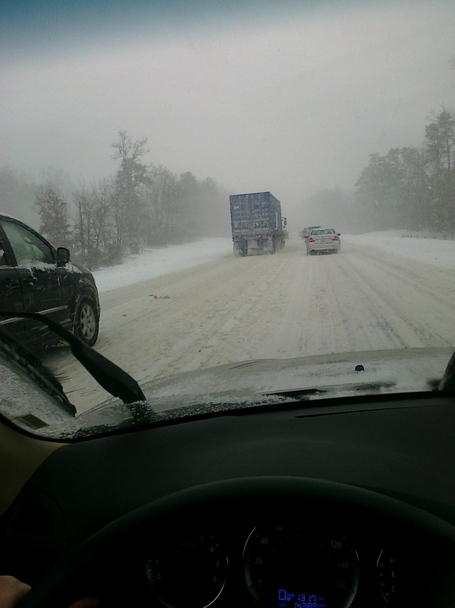 Snow is starting to worry me a bit

At the 83B exit, near Route 1, I exit I-95. Snowfall has made further driving nearly impossible. I'm at Richmond, and I need to cut my loses. I pull off the highway onto the exit ramp, but I have to stop because about ten other cars in front of me had the same idea. The car line stretches from the highway up the ramp to the top. For ten minutes, no one moves. Snow continues to fall. I get out of my car and see, up ahead, that three of the cars at the top of the ramp and stuck. One car is perpendicular to the road, with his front slammed into an off-ramp snow embankment.

Not good. We are all stuck on the off-ramp, and snow is piling up on our cars very rapidly.

Well, this is when the "super hero" in me decided to come out. Of course, I wasn't alone. Seven or so people also got out of the cars and decided that rather than freezing to death on the I-95 off-ramp, or abandoning their vehicles, that they would help the cars stuck near the top. The eight of us helped dig the Cadillac out of the snow embankment. We also pushed the car back onto the on ramp. However, because the car is a Cadillac (crap cars, in my humble opinion), the traction in the snow is non-existent. Fortunately, a tow truck was kind (brave) enough to back down the exit ramp, load the caddy onto its bed, and haul it off. The effort was dangerous in that the caddy nearly tipped the truck over not once but twice. However, the truck managed to safely haul the caddy up the ramp. With that car gone, now came the task of digging out the two other stuck cars out and pushing them, and everyone else, up and off the on ramp. 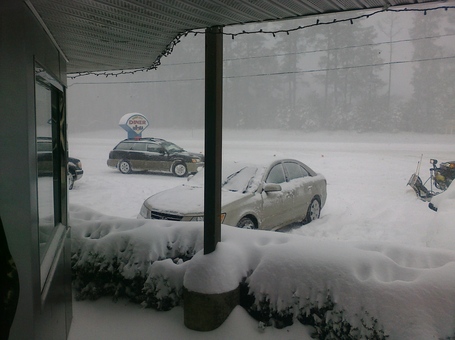 View of the outside world from the River City Diner window

I honestly wish I had pictures of this event, but at some point in the snow shoveling and car pushing, my hand got sliced. Blood was all over my right hand, and it was so cold outside that I didn't feel it.

The next thirty minutes saw me and six others dig out and push three compacts, a sedan, and a van up and off the on-ramp. My car was one of the last. Fortunately, the guys pushing me from behind, while very tired, did enough to get me up the ramp. The sedan I drove (Hyundai) was good enough to pull itself up the ramp and onto the main road. Once there at the top, I saw a hotel nestled next to a diner on my left. Fearing that I'd loose traction and momentum (and thus, get stuck again), I ran a red light, turned left, drove over a concrete embankment that was invisible in the snow, and parked the car in front of the diner next door to the hotel.

I ran into the hotel and booked a room for the evening. My intent was to exit the hotel, run out into the street, jog back down the ramp, and help the three or so cars that were behind me back up the ramp. However, the hotel staff noticed blood-caked around my hand, which was beet red. They insisted on cleaning it before I left. It's now, maybe, 2pm. I've been pushing cars and shoveling snow of 90 minutes. Did I mention I hadn't eaten since 8pm the night before? 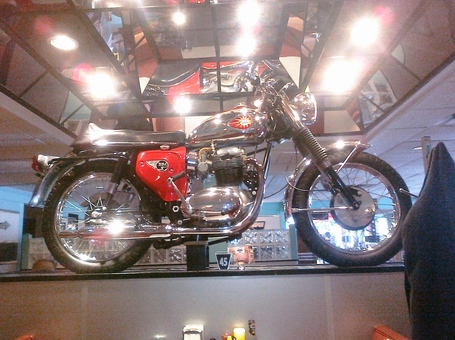 With my hand bandaged, the adrenaline starts wearing off. I'm getting dizzy and almost fall on the hotel lobby floor. I got next door, walk into the River City Diner, and immediately the diner staff take notice of me. I must have looked like the Abominable Snow Man. The waitress keeps calling me "honey," and I sits me at a table in the back. I take off my shoes and wet socks, laying them on a chair to dry out. I then order fried crab cakes with scrambled eggs, friend apples, and biscuits. That was one of the best meals I ever had. 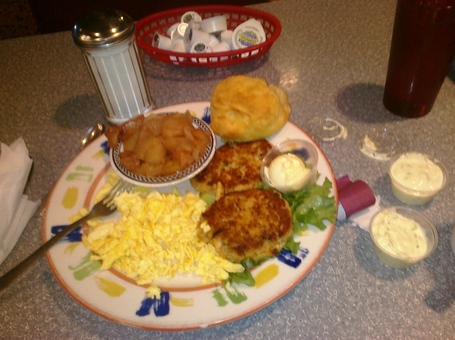 Outside, cars were still slipping and sliding and crashing all over the place. For eight straight hours, snow fell and fell at a rate unseen in Virginia, or so the residents told me. I stayed in the diner, called family and loved ones to tell them I was OK, drank coffee to warm up, and chatted with people who were in the same boat with me. Many of those people were football fans, which fit right into my narrative of wanting to interact with real football fans on my way down to Miami. One of my favorite conversations was with Charles of Maryland, an old Baltimore Colts fan who loved talking about the connections between Johnny U and Peyton. I'll post my discussion with him later today.

After taking a VERY hot shower, warming up, and changing into newer, cleaner, DRYER clothes, I hit the sack to rest up for my ten hour trek scheduled the next day. I was hopeful roads would be clear by then. Thankfully, they were. I was on the road by 7:30am, sipping coffee and listening to Sirius NFL radio on my way down to Savannah, GA.