Share All sharing options for: Stampede Blue at the Super Bowl: Thoughts from 2/3/10 Colts Press Conference 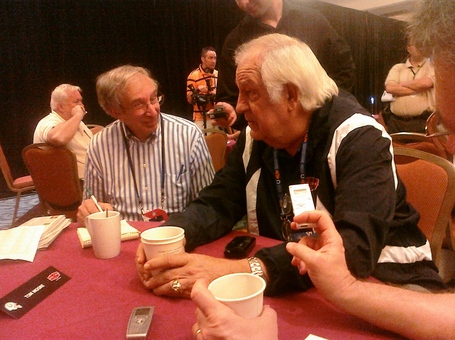 Tom Moore, right, at the media event this morning

OK, press conferences like today are FAAAAAAAARRRRRRR better than Media Day. Absolutely no question about it. Oh, and just a little FYI for those of you who are curious, the NFL granted me my "press" credentials. This means all the players and coaches are accessible to me on the same level as folks like Paul Kuharsky, John Clayton, and Bob Kravitz.

So, that whole "No Bloggers!" rule the Colts hold over me? Means nothing here.

The Colts do not control my access. The NFL does. It's very refreshing, and for the life of me I have no idea why teams like the Colts work so hard to limit their access. This morning, I had several very fun and very stimulating conversations with Ray Rychleski, Tom Moore, and Gene Huey, just to name a few. I LOVE Gene Huey! The guy is just awesome to talk football to. Tom Moore is everything people have written about him. He's your granddad, full of old Korea and Vietnam stories; how football terms are taken from military lingo, stuff like that.

Ray Rychleski? Cool guy. We talked about coaching Pat McAfee, installing his brand of special teams with the team, and how impressed he was with the level of work and preparation the players in the Colts organization put into their craft. He told me his big worry taking a pro job was that the pro atheletes would loaf a bit because they are getting paid. Not so with the Colts.

Players interviewed today: Marlin Jackson, Donald Brown, Fili Moala, Curtis Painter, and Tim Jennings. Yes, I asked Tim many of the questions you have wanted him to answer (Why do people seem to target him?) I have to say, he didn't dodge the question. After talking with him, I've got some appreciation for Tim I didn't have before.

After the jump, I have additional observations from the morning press event. Chew on these while I dive head long into the boring, mindless work that is transcribing my interviews with the players and coaches. I'll post photos in a few minutes as well.