Stampede Blue at the Super Bowl: A Conversation with Ray Rychleski

Share All sharing options for: Stampede Blue at the Super Bowl: A Conversation with Ray Rychleski 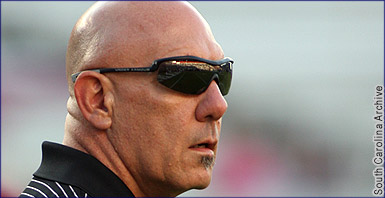 This morning at the Colts media event, I had the pleasure to sit down with several Indianapolis Colts coaches and players and talk about the Super Bowl, the 2009 season, and football in general. One of the people who was an absolute blast to talk with was Colts special teams coach Ray Rychleski. The man with the coolest "Soul Patch" in the NFL was kind enough to grant a few minutes to talk about his first season as the Colts special teams coach.

Interestly enough, before I could start asking him questions, he started asking some of me. Maybe he thought I was some kind of crazy idiot who had snuck his way into the event, which, of course, means Coach Ray has very good instincts about people.

RR: Man! You’re too smart to be talking to me.

BBS: No, no I’m not. Trust me. I’m not. Just because you go to NYU doesn’t mean that you’re smart. Maybe a little street smart but not smart-smart. You have a little bit of a fan following.

When you were hired, tons of Maryland and SC fans flooded our blog saying you were the perfect hire for the Colts. Gamecocks fans were really upset the Colts hired you away from them. When you came into the job as special teams coordinator, what was the biggest shock to your system when you first started working for a professional team?

RR: First of all, thank you very much. And thank you to all the Gamecock and Maryland people. I still wear all their stuff.

BBS: They love you man!

RR: (Laughs.) When I first came [to the Colts], I was obviously real excited about the job. And I always felt I could do the job. My good fortune was coming to the right organization: President, owner, QB, and a great coach as everybody is finding out. The thing I found out is these [Colts players], I thought there would be some loafing going on because they’re getting paid; just the opposite. I haven’t seen one loaf since I’ve been here. I’ve been extremely impresed with our work ethic. And wherever that started here in Indianapolis way back when, we have a tremendous work ethic. Just the way they approach every practice, and it has been a pleasure working with them.

BBS: Let’s talk about Pat McAfee. You’ve got a rookie punter. The rumor that I heard was that you wanted to keep Hunter Smith. The Colts decided to let Hunter go and they drafted Pat. Now, it seems Pat has blossomed as an NFL punter, as a kick-off guy, and other elements of his game. Is that because of you and your coaching?

RR: (Laughs.) Well, I think there are a lot of factors. First of all, he’s talented. And Jim Caldwell has a saying, "Talent wins if talent works hard." Not only is Pat talented, he works hard at his craft. He’s been a god send. I always knew what Pat could do because, unfortunately, at Maryland I went against him. It's amazing. A Mountaineer and a Terp getting together here. It’s not good. But, we’ve made it work, let me just say that. It's been a lot of fun. But anyway, I knew Pat could kick-off, but we were a little reluctant because he was a rookie punter, first year, let’s not put too much on his plate. Plus, he’d never held [on field goals] in college before. And I saw him do it when I worked him out. I felt he could do it. Well, as time went on, I said, "We gotta give this guy a shot." He's too strong a leg. And, you know, he's been a great punter, but hes really helped us out on kick-off coverage. Saying all that, hes done a marvelous job. I'll give a lot of credit to Adam Vinatieri, Matt Stover, and Justin Snow who are three veterans. They took him under their wing, and he’s eaten up all of their knowledge. That’s whats great about the guy. He wants to learn. Now, hes still got 22-year-old enthusiasm, which rubs off on those guys.

RR: Yeah! They say, "You know what? He's making this fun around here." I'll tell you this, it’s a long season. Today’s signing day. I went through a football season and a recruiting season. (we laugh) So, saying all that, its been great for Pat McAfee but it has been even better for Ray Rychleski and the Colts.

BBS: Did you make any tweaks or changes to the special teams coverage units when you took this job? I ask because fans think the coverage units seem to look better this year than in year’s past.

RR: Unfortunately, I'm getting older. I can’t tell anyone im a young coach anymore. But, we have a system. You develop a system over years, and you have to bring in your own system. You can’t be someone else. You can’t use somebody else’s system. Jim wanted me as a person, as a coach, and he wanted change. So, I just brought in our system. The thing I had to prove to the players is, "What's this college guy know?" And I think once they knew that I knew what the heck was going on around here, they bought into everything. And the players have to buy into it. That’s the key.

BBS: When did they buy into it? Was there a specific point where you knew they bought into what you were talking about?

RR: You know, it was a daily grind. Each meeting, being prepared. Showing them stuff… I can’t tell you how much film I’ve watched. Not only all of last year’s film, but 06, 07, etc. I have a file called "fakes."

RR: I’d show them different stuff. I’d say hey in this situation what would you do, and they’d tell me, "I wouldn’t do that. I'd do this." Then, I'd show them on tape. And they started going woah! Woah! You know? It just took a while, but I was always on stage, and I liked it. It made me be more prepared, and I was NOT going to be unprepared. And Jim [Caldwell] would always tell me, if you prepare, they’ll buy into anything you say.

BBS: Thanks for your time, coach.