Stampede Blue at the Super Bowl: A Conversation with Pat McAfee

Share All sharing options for: Stampede Blue at the Super Bowl: A Conversation with Pat McAfee 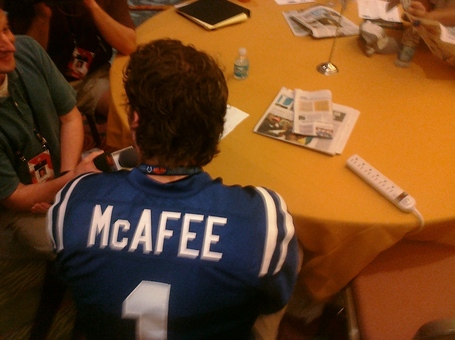 Pat McAfee is a young guy, but his youth is a bit deceiving.

He sits at the interview table, diamond earring in his right ear, with a pleasant, goofy sort of grin on his face. He's very much the kind of guy that you like to hang out with; funny, engaging, and not the least bit pretentious. However, when you get Pat McAfee talking about football, in particular his craft as a specialist, his face will turn serious and he will talk with the earnest precision of a surgeon describing an open heart procedure.

Yesterday, at the Colts media event in Fort Lauderdale, Pat was kind enough to talk with Stampede Blue about his rookie year and the collection of amazing veterans that have helped him develop into an excellent rookie punter.

Oh, and he warns that one should never pull a prank on Adam Vinaiteri. Ever.

Pat McAfee: It’s been a whirlwind, man. All I’ve been trying to do is go week to week, and I’m being really honest when I say [that]. A couple of weeks ago, we looked back; we have a board in our team meeting room that has all our accomplishments. It really is amazing to see how many games we’ve been through, including preseason; 20-some games. All I really try and think about is week to week, day to day; trying to get better. It really has been just a whirlwind.

BBS: Talked to Coach Rychleski yesterday and he said you were like a sponge, soaking up knowledge from veterans like Justin Snow, Matt Stover, and Adam Vinaiteri.

PMc: When the Indianapolis Colts drafted me, I got really excited because Adam Vinatieri is a guy I’ve always looked up to. If you’re a specialist, a kicker, a punter, Adam Vinatieri is a guy that is a hero for you. So whenever I got here, I got a chance to meet him, interact with him, talk with him, and I found out all these guys are just regular guys. They want to help out the young guys.

BBS: Where you star struck at first?

PMc: Nah, I didn’t ever get star struck because he’s a teammate. But, I was pretty excited to see the guy that’s in these Snickers commercials and kicking game-winning field goals. But, whenever you get the chance to talk to them, you find out that they are pretty normal guys. They just want to help you out too. And him and Matt Stover and Justin Snow, they’ve picked up things from their careers; Justin for 10 years, Adam for 15, Stover 20. They just picked up [knowledge] over their careers and try and share with me as a rookie. I’m so grateful [for this] because I learned a lot that I probably wouldn’t have learned [unless] I made it to year 7 or year 8. I get a chance to be around someone of the greatest specialists to ever play the game. I just try and learn as much as possible, pick their brains as much as possible not only on the field but off the field as well.

BBS: Allow me to make an observation, please. You seem like a serious guy. When you are talking about your job, you are very serious. Yet, for a fan like me, the Pat McAfee we've seen is the goofy, carefree practical joker; the guy interviewing Clint Session at media day. The guy with the diamond ring in his ear who wrestles pig guys on You Tube.

PMc: It's still a game. This is a game. It always is. It always will be. Football is a game. Everybody tries to make it into this business thing, which it is. Its our job too. It’s the way we pay for our living. But, you’ve got to have fun with it. And whenever I come to do my job, I just try and help out other folks as much as possible. So when it comes to punting, kicking off, holding, I don’t really like to joke around too much because it's my craft. But with everything else, I just like to have a good time, be in a playful mood when the time is right. And hopefully bring some youth back to a 42 year-old-man and  to Adam Vinatieri. So its definitely fun and I like to crack jokes. But, when its time to work, its time to work.

BBS: Do you ever crack jokes at the expense of Matt Stover, Justin Snow, and Adam Vinatieri?

PMc: have I ever?

PMc: When was the latest!

BBS: Give me a good one.

PMc: The thing is, Adam Vinatieri, if you crack a joke on him, this is what he said to me: If you do a practical joke on me, I have nothing but time on my hands right now and money. I will figure something out to get back at you. So, you cant really joke around with Vinny too much because he will get you back and you'll be a lot worse.

BBS: Is he a trash talker?

PMc: He's not really a trash talker, but he will dig deep to find something like in your past. Like if there was a picture of me in college wearing something ridiculous or embarrassing, he’ll find it. And hell put it all over the locker room. Stover, on the other hand, is such a nice guy. I mean, the guys like super nice. He never swears. He has a lot of faith. He's just a super nice guy. You can talk to him about anything. So, you can make fun of him a little bit, but then you start to feel bad. So, it's little things, you make little comments at him. Like, Stover talks to himself a little bit before he kicks. Like, to remind himself of things. Like, he'll accidentally slip up and say something. The first time I held for him, I heard him say "1, 2, 3 Matt." to remind him of something. And I was like, man, time out! What are you saying to yourself? We laugh) No, but the guys, both of them, are consummate professionals. So is Justin Snow. It's fun to be around them.

Thanks to Pat for one of the funnier interviews I've gotten to do so far.