Stampede Blue at the Super Bowl: A Conversation with Curtis Painter

Share All sharing options for: Stampede Blue at the Super Bowl: A Conversation with Curtis Painter 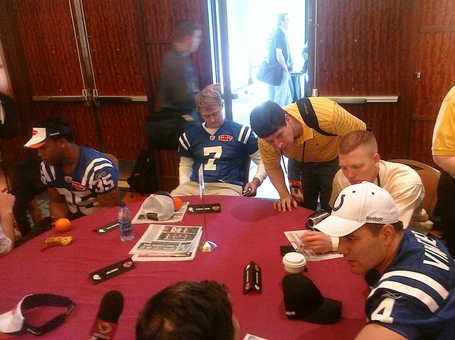 In South Florida, the site of Super Bowl 44, Stampede Blue caught up with the man who received the brunt of Colts fans anger in Week Sixteen: Curtis Painter. Curtis was kind enough to talk about what happened in Week Sixteen and how he has developed as a quarterback.

BBS: I want to talk about Week Sixteen, which is what everybody else has talked to you about. One of the sentiments Colts fans wanted to convey to you was that, I had posts that said that if you find Curtis Painter, let him know that we weren’t booing him. We were booing the decision [to bench starters].

BBS: It seemed like that was just an impossible situation to walk into. Fans are angry, the situation is bad. What were you thinking when you walked into a situation where you’re going to play quarterback against the Jets and fans are booing at that moment?

CP: Well, I mean, tough situation or not, that’s kind of what you’re here for. You know, sometimes you go into good situations, sometimes you go into bad. That’s kind of the position you're in. I didn’t look at it as anything other than that. I have one goal when I go in and that’s to do the best I can and try to win. Unfortunately, that didn’t happen. But, I really… so much is going through my mind as far as plays that I didn’t have too much time to think of anything outside of the huddle and the line of scrimmage.

BBS: What has changed about u since training camp?

CP: Well, I think that each day in this organization you learn a lot more about this system. So I think that , I just [have] continued to grow and learn things. I’m certainly not on the level that [Peyton Manning] is and, I think that, just the knowledge of the offense and how we work has grown. Going into camp, just being there a few weeks really, everything was very new. So, I just think, in that respect I guess [I've changed].

BBS: Who has helped you out the most?

CP: I guess im a big notetaker in meetings. And Peyton, obviously, does a lot of the talking in the meetings [as does] Coach [Frank Reich]. So, just really, whether he's meant to or not, just kind of listen to him and learn at how he approaches practice and metings. I've really learned a lot from him. And obviously, he's very successful and a pretty good guy to learn from.

BBS: Does Coach Reich get on you, or is he more of a teacher?

CP: He's more of a motivator guy, a teacher, I guess is whaat you’d kind of call him. Not a guy that’s going to raise his voice and scream and yell at you if you make a bad play. But, [instead] talk you through things. If you make a bad decision, kind of talk you through what you should have done or what you could of done. And at the same time if you do something well, he's there supporting you and I really think I like that coaching style and I think he fit real well together.

Special thank to Curtis for taking the time to chat. And, just in case he is reading this, we weren't booing you, Curtis.