Stampede Blue at the Super Bowl: A Conversation with Tom Moore

Share All sharing options for: Stampede Blue at the Super Bowl: A Conversation with Tom Moore 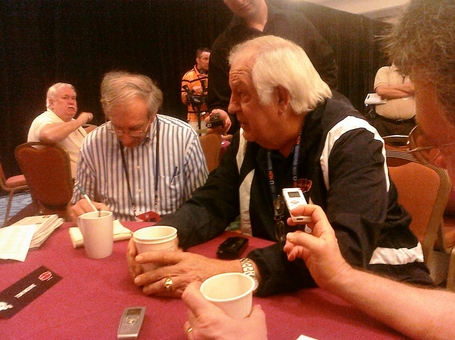 Tom Moore has no regrets.

That's what he told us at a media press event a few days ago. Listening to Moore speaks about his days coaching football in the Army, his brief career in the World Football League, and his time at the University of Dayton is kind of like imagining what Hemingway would sound like if he talked about hunting in Africa. Tom Moore, with his deep, "Fargo-like" accent, is like your granddad; full of stories and funny phrases that captivate you. The man has a strong passion for football and coaching, and it is pretty cool to see someone with such passion talk about their craft.

For example, I had no idea Tom Moore was, pretty much, flat broken in and around 1974 after his job in the World Football League didn't work out. He was coaching in New York City for the New York Stars at the time.

Moore and his wife left NYC with only enough gas to make it back to Minneapolis. He had to borrow money after that to make ends meet until he got a job. The job he would get would be with the University of Minnesota as their offensive coordinator in 1975. That job was a homecoming, of sorts, for Moore. He'd coached at Minnesota before from 1972-1973, and he is a native of Owatonna, MN. In 1975, when Moore was getting his feet wet as the coordinator in Minnesota, he began working with his starting QB at the time. That starting QB was a young kid from Jackson, MI.

His name was Tony Dungy.

Dungy would later work with Moore to build one of the greatest offenses in NFL history with the Indianapolis Colts. Tony Dungy is now retired, but Tom Moore most certainly is not.

I don't begrudge Moore for fighting for his NFL pension last off-season. If I were someone who had lost everything, gotten it all back, and the was told that I'd lose my pension, yeah, I'd fight for it. Coach Moore was kind enough to answer some questions from Stampede Blue. You can see our interview with him after the jump.

BBS: Is Assistant Head Coach and Receivers Coach Clyde Christensen more involved working with you and the offense?

Tom Moore: Yeah, I don’t know if you can say "more involved." He's more involved in putting things in with the team, and does great a great job.

TM (smiles): I don’t know, but I sure thank the lord for giving it to me. (We laugh) I don’t know. It’s the way I am. That’s what keeps you going. Like my wife, she kind of kids me and she says, You're afraid to retire, aren’t you? I says, you may be right.

TM: And, I don’t know. There's so much in life that the last thing I want to do is just sit and not do anything. This [coaching football] is fun.

BBS: Do you think the rules for pass interference, the 5 yard rule, and others are the reason why we saw ten 4,000 yard QBs this season?

TM: Well, [those rules have] been in for some time. And I think people producing [big numbers], I think the rules may have some part of it. I think the athletes are bigger, stronger, faster, better. I think there's a lot of reasons. The great players a long time ago would still be great players right now. Great players are great players. Do the rules help? Yeah, I'm sure. You know, how many years have we had 16 games instead of 14 games? So, there's two more games that go into that factor. So, I think it’s a lot of things. I don’t know that you can isolate or pinpoint it to just one thing.

BBS: Do you think complicated offenses, like people sometimes call your offense, are a reason for the big spike in numbers?

BBS: Thanks for your time, coach.