Tomorrow the Colts will be visited by our first bona fide free agent, Ravens' tackle Adam Terry! At 6'8", 335 pounds, Adam represents a shift from the smaller, more agile offensive linemen typically employed by the Colts to the large, bruising line that running backs can crash through. This is where the excitement ends; Adam Terry and his weak knees may be damaged goods.

Date of Injury: Unknown, but first surgery was in March/April 2009, second in August 2009

Nature of Injury: Sprained knee, cyst in the right knee, plus post-surgical complications 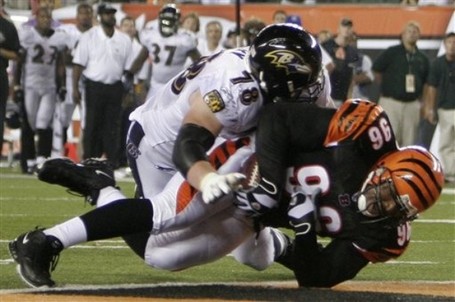 Mr. Terry finished the 2008 campaign having participated in 12 of the 16 regular season games (including the final 4), and all 3 of the Ravens' post-season games. It seems that he likely played through some pain, as he underwent arthroscopic surgery to remove a cyst from his knee early in the offseason between 2008 and 2009. Even though he reported that he had already "started running" in late April, complications sent him back to the operating table in August, when he underwent microfracture surgery. This event sent him to IR before the first pre-season game.

The (apparent) initial issue - a cyst in the knee. A cyst can be described as a closed "sac" with some sort of liquid or semi-liquid filling it, anywhere in the bone or soft tissue, and normal or abnormal. That's a pretty broad description, but frankly I'd describe any extra sac of liquid in the knee as abnormal! The most common knee cyst is known as the Baker cyst, which occurs in a specific sac in the knee whose description was frankly too technical for someone with a cosmo in her. An arthroscopic procedure was used to either deflate or remove the cyst, and Adam was sent on his way.

Unfortunately, there were "complications" from the surgery, and he went back under the knife in August - reportedly for microfracture surgery. This is interesting to me, because this procedure seems aimed at regenerating cartilage, and I'm not quite sure why removing a cyst would necessarily have interfered with cartilage. Regardless, he underwent this surgery in August, and has been recovering ever since.

The recovery rate is 75-80% among patients under 45, including professional athletes. Patients can potentially return to sports as quickly as 4 months after surgery, but it seems a more realistic estimate is 6-8 months. Although Terry has had 7 months to recover, it is unclear whether he'll be able to show the Colts his stuff. Additionally, cysts are indicative of osteoarthritis, which may make it too painful to continue playing. Combine this with rumors after last season that the Ravens wanted to dump Terry, and my recommendation is...