Share All sharing options for: Dr. Blue's Health of the Franchise - Manning

For the past 12 seasons, Peyton Manning has been the model of health.  He has taken every meaningful snap since he began in the league, except for one pesky snap after someone broke his jaw for him.  Prior to the 2008 season, he underwent two offseason knee surgeries, getting his sea legs under him in time to finish with a 12-4 record and earn his third MVP award.

So when the words "Peyton Manning" and "surgery" are used in the same vicinity, we fans naturally fret.  We simply don't want to think that Manning can age, is vulnerable, or is somehow human.  But we must face facts… Peyton gets hangnails, too.  And they hurt.

Typical Rehab Process/Duration: Most cases do not require surgery and can be treated with anti-inflammatories, physical therapy or bracing.  My husband suffered a slipped disc several years ago and they essentially put him on the rack to stretch his neck and relieve the pressure - after about a dozen sessions he's been able to manage the situation.

Surgery to repair the condition typically involves making an incision in the neck and going through to remove the protruding part of the disc or bone spur that is causing the pressure.  Those who undergo a surgical process typically spend a few days resting to recover from surgery, then begin range-of-motion exercises and eventually strengthening and conditioning.  The process can take several months for the average patient, but based on the doctor Manning saw, I believe he underwent a more advanced procedure that will accelerate his recovery.

Pinched nerves can be pesky things; they present themselves as a potential range of symptoms - tingling, weakness, pain - in essentially any of your extremities (though the neck, shoulders, arms and hands seem most common).  Although Manning has reportedly dealt with the issue "intermittently for the past four years,"  the Colts claimed that Manning's activity on or off the field was never impacted.  But it is obvious that for an elite quarterback, any discomfort can potentially be disruptive.

The source of Manning's pain was in the cervical spine or neck (the top 7 vertebrae of the spine).  The entire spine is made up of individual vertebrae (bones) cushioned from each other vertically by spongy "discs."  The spine protects the spinal cord, which extends approximately 18 inches from the brain down the back and carries signals from the brain to the rest of the body. 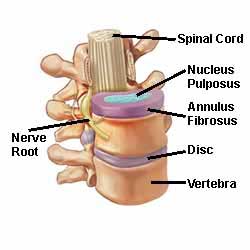 Any pressure on the spinal cord will result in some measure of discomfort.  The source of pressure can be a "herniated" disc (a disc that has partially or fully ruptured and the center squeezes out), or a bone spur (extra bone that grows as a body tries to repair itself).  Removing the disc or bone spur relieves the pressure, generally bringing relief.

Peyton was treated by Dr. Richard Fessler, a neurosurgeon on the Northwestern Medical Faculty in Chicago who specializes in minimally invasive spinal surgery, specifically microendoscopic procedures.  Microendoscopic is a fancy way to describe looking inside the body through camera inserted in a tiny tube; think of those scenes in movies where a thief uses a teeny tiny camera through the floor or ceiling grate to spy on his target while going undetected.  Here is an excellent animated illustration of the procedure I suspect Manning underwent.  I highly recommend taking the time to watch it:  Cervical Procedure

Given the advanced procedure Manning underwent, the report that he left the hospital the day after the surgery, and his pure will to perform, I believe we will see him back on the field at least by training camp and definitely for Game 1.