Share All sharing options for: The Colts offense now belongs to Clyde Christensen 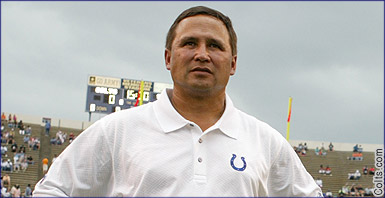 With Christensen now the OC, speculation from us was that Christensen would now own the Colts offense. Turns out, we were right.

According to ESPN's Chris Mortensen, reported via PFT:

Christensen will now be the coach whose voice Manning hears on the speakers in his helmet, a different voice than Manning has heard throughout his entire NFL career.

"For the first time since Peyton Manning became the Indianapolis Colts' quarterback in 1998, Tom Moore -- and I'll say the great Tom Moore -- will not be the one calling plays in Peyton Manning's ear," Mortensen said on SportsCenter. "It will be Clyde Christensen, who now officially becomes the offensive coordinator. Moore, in essence, will be involved in game planning, but on game day, Clyde Christensen will be calling plays."

Mortensen added that Christensen plans to "tweak their offense a little bit."

Translation: The Colts are going to run the ball more.

Obviously, that's speculation on my part, but the shift of coordinator control from Moore to Christensen, coupled with the fact that the Colts are jettisoning smaller, quicker lineman like Ryan Lilja for bigger guys like Andy Alleman, strongly suggests that Christensen's "tweaks" call for more power running.

Personally, I'm neither for nor against this.

Tom Moore is one of the greatest coaches to ever walk an NFL sideline. He is an offensive genius. When people call coaches like Jon Gruden and Charlie Weis "geniuses," it's an insult to true geniuses like Moore. When Jon Gruden and Charlie Weis turn a player like Scott Mitchell into a Top 5 QB for a season, you can call them geniuses. Tom Moore took utter garbage (Mitchell) and transformed it into gold. He also took gold (Peyton Manning) and turned it into priceless jewelry platinum.

Moore's offenses focused on open formations, usually two tight end or three wide receivers. Rarely did you see a fullback. The strengths were throwing the ball and using the pass to set-up the run. The results are an offense that, for ten years, is the greatest in NFL history.

When you look at that body of work, it's hard to argue for any "tweaking." However, when a new coach is brought in to run a system, it only makes sense that they put their stamp on things. Christensen is a WR Coach and he likely loves to throw the ball. However, I would not be surprised if we saw more power running from the Colts in 2010, especially in short yardage.

This new role for Moore will likely suit him. He told me at the Super Bowl that his wife thinks he is afraid to retire. Moore smiled and said she might be right, but that he also had tremendous energy for his job. He loves what he does. That said, Christensen was due for this promotion. He'd been working with Moore and Manning for years, installing the third down offense and assuming Tom Moore's duties when Moore "retired" briefly last year.

The fact that there seems to be no ego going on with these moves speaks volumes as to how impressive the Colts are as an organization. If you saw this kind of thing in other organizations, the move would be seen as a slight to a coach like Moore. In Indy, it isn't. Moore wants to stay and be involved, but he also knows he is a consultant and that Christensen's time has come. Moore's reputation was also built out of letting go of "control" and trusting the people around him to do their jobs. For twelve seasons, he trusted Peyton Manning to call his own plays during games.

Moore has never let ego get in the way of team progress, which is why they really need to consider adding more assistant coaches to the Hall of Fame. If Dick Lebeau is going to Canton as an assistant coach, Tom Moore better go as well when he hangs them up.

During camp and pre-season, we will monitor how the Colts offense has "tweaked" under Christensen's guidance.