With the 22nd Pick in the 2010 Stampede Blue Community Mock Draft, the New England Patriots select...

Share All sharing options for: With the 22nd Pick in the 2010 Stampede Blue Community Mock Draft, the New England Patriots select...

Pick made by skywalker:

Alot of us over here at Stampede Blue know the Patriots almost as well as we know the Colts. I am not one of those people. But at first glance you see that they no longer have Richard Seymour or Jarvis Green. They did however re-sign Vince Wilfork. Sergio Kindle was an option here but his "bustability" is higher than Odrick's. Jared Odrick is a player that the Patriots could use right away in their rotation at defensive end. He is strong AND agile. Some "experts" even suggest he could hold up as a 3-4 NT. I see him more as a DE next to Wilfork.

The Patriots did draft Ron Brace last year and I'm not sure if they want to use him as a DE or as relief for Wilfork. Odrick is about 30 pounds lighter than Brace and the Patriots are ridiculously thin at DE which leads me to believe they would draft him to play DE in my opinion. As always the mysterious Darth Hoodie is as predictable as Jedi Master Polian. The dark side has clouded my vision on this pick soooooooo yeah.

How will he impact the 2010 Patriots?

If he is drafted his impact will be minimal. The hoodie rarely throws his rookies to the wookies. He prefers to teach them the ways of the force before they are thrust full time into the lineup. The Sith are rebuilding the death star. Peyton Manning is our only hope. 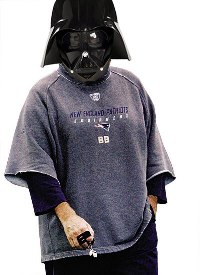 The Packers, and bracketismyboy, are on the clock...