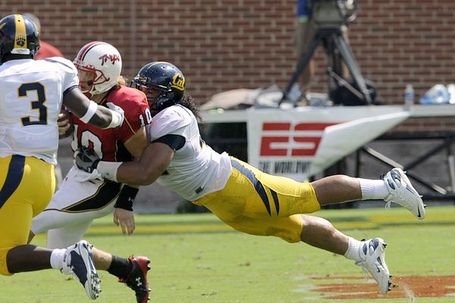 Its no secret that the Colts of late have had problems rushing the passer. Other than Freeney or Mathis there really is no one else on the roster who can get to the passer. The upgrades at DT with Muir and Mookey have helped what was a poor run defense, but the interior presence in the pass game has been largely invisible. 2005 was the last time the Colts had numerous players along the defensive front that could get to the passer. Reagor and Tripplett were no Tommie Harris or Warren Sapp, but they were disruptive enough in both the run and pass game, Since there release, all the attention has gone to Freeney and Mathis, thus wearing them down and increasing the risk of injury.

To fix this problem, I believe the Colts should take a vested interest in Tyson Alualu. This Cal Bear has been a disruptive force at both DT and DE positions. He fits the mold of a Colts DT at 6'2, 291 lb. and is known as a high character guy, Here is what the Scouting reports have to say about him.

Pass rush: Has a good initial burst and hand placement to get into the pads of the offensive tackle and drive him into the pocket. Lacks sustained speed off the edge to rush the passer as a defensive end and likely will be moved inside to tackle in the NFL. Marginal technique as a pass rusher. Relies on a bull rush and strong hands to disengage and uses mostly effort to collapse the pocket. Shows a spin move, but it is slow to develop and generally ineffective.

Run defense: Good initial quickness off the snap. Good lateral agility and balance to slide down the line against the toss and make the tackle at or near the line of scrimmage. Uses his natural leverage advantage and overall strength to anchor at the point of attack. Good upper-body strength to stack and shed in the running game.

Explosion: Provides good initial pop when meeting the blocker. Shows explosiveness in his hands with his ability to shed blocks and gives high effort to close, but only marginal burst.

Strength: Looks lighter on film than his listed weight, but plays with good strength at the point of attack. Relies on his lower-body drive and natural leverage advantage to anchor. Doesn't give up much room and has the quick, strong hands to disengage to make plays at or near the line of scrimmage.

Tackling: Locates the ball quickly and flies to the action. Only marginal flexibility to break down in space, but he's a high-effort pursuit defender willing to launch his body into the air to knock down the ballcarrier. Good strength for the drag-down tackle.

Intangibles: High-intensity player who plays with reckless abandon. Seems to enjoy the physical aspect of the game and is willing to throw his body into the pile. Team captain. Given the team's Brick Muller Award as the defensive line MVP the past three years. Played in all 51 games of his career. Earned Joe Roth Award for best exemplifying courage, attitude and sportsmanship, as well as the Senior Lifter of the Year. Married with two children.

Productive talent who played at a high level throughout career earning all-conference recognition. Uses his power to hold up at the point of attack and to push the pocket. Displays the pass rush ability necessary to stay on the field on third down. Exhibits impressive hand use to gain leverage and shed blockers. Is a tough, relentless player.

Only possesses average size. Lacks the ideal bulk to play inside and the height of a defensive end. Average change of direction in space and doesn’t always locate the football quickly. Only has average range in pursuit and won’t chase down plays from the backside.

The main problem with Alualu is that he played in a 3-4 system for the most part of his career. Although scouts project that he will do better if shifted inside in a 4-3 scheme, the same was said about Fili Moala. This could mean that the Alualu may not have an instant impact shifting to a 4-3 the way Moala didnt. However, based on all the scouting reports, it seems as though Alualu is technically sound unlike Fili. I have confidence that both he and Fili can make it in our system.