Share All sharing options for: A Sunday Morning Special: The Butler Bulldogs and Lucas Oil Stadium

For a brief moment, I woke up this morning and it felt like the regular season.

The reason for this is that with all the football and Indiana-related news that has dominated the news cycle, it almost feels as if last night there was an actual football game, and this morning I have to do my usual recap. That's how I felt after watching the Butler Bulldogs dismantle the Kansas State Wildcats to reach the 2010 NCAA Four final.

For Indianapolis basketball fans, this is the first thing we've been excited about in a looooooooooooooong time. Because of the downfall of the NBA and the Pacers, and because the Indiana University still recovering from the corrupt Kelvin Sampson era, there has not been much to cheer about when it comes to the painted hardwood. Because of this, the city of Indianapolis has transformed from a basketball town into a football town.

However, today, the focus for people in downtown Indy is not the NFL Draft or Training Camp in August. The focus is Butler.

The Bulldogs will play in the Final Four at Lucas Oil Stadium, home of the Colts. Just FYI: The Luke is only 6 miles from the immortal Hinkle Fieldhouse, Butler's home court. They shot the final game from the movie Hoosiers at Hinkle Fieldhouse. I remember when they shot it because the film company asked local residents to come to the "game" and fill the stands for the scene. Hollywood history aside, this means that Indiana will have a hometown team in a tournament hosted in Indianapolis. Home-court advantage just got re-defined.

Now, if you do not know where Hinkle Fieldhouse is, consider yourself a novice basketball fan until you read this.

If you don't know who Tony Hinkle was, the man the fieldhouse was named after, consider yourself totally ignorant on the history and roots of basketball until you read this.

After the jump, get a sense of why the Bulldogs playing in an Indianapolis-hosted Final Four is similar to the Colts playing in a Super Bowl also hosted in Indy. It's that big of a deal. To give you a taste, please know that Butler has participated in college basketball for 112 years. Yes, you read that right. 112 friggin years! James Zink coached Butler to a 2-3 record back in the 1897-1898 season. And you thought Bob Knight looked geriatric pontificating over on ESPN.

In their 112 years of college basketball, Butler has never reached a Final Four. Ever. Their last collegiate basketball championship was in 1929, long before the NCAA decided to form the now-famous tournament.

Now, obviously, Butler basketball is not related to the Colts, other than the fact that they will play in the Final Four at The Luke. But, like the Colts hosting the AFC Championship Game for the second time in four years, and like the Super Bowl the city is scheduled to host in 2012, a Final Four event featuring an Indianapolis team is another one of those "I remember when" moments. When I grew up as a kid on the north side of Indy, near Keystone and 50th Street, the thought of my town hosting anything remotely like a Final Four, or a Championship Game, seemed on par with aliens landed on Monument Circle and asking for the nearest Denny's.

In short, Butler doing what it has done, reaching the Final Four for the first time in their 112 years of playing collegiate basketball, and doing it in a year where Indianapolis is hosting the Final Four is, for Hoosiers, very much like hosting a Super Bowl. 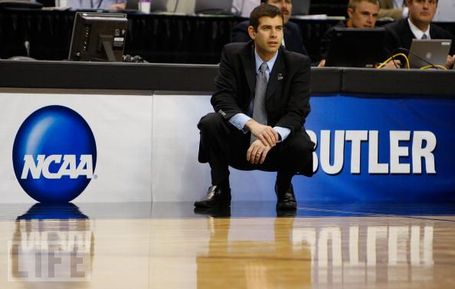 SB Nation has no Butler Bulldogs blog. So, there is no writer I can turn to and ask "How do you feel?" Despite the fact that we do not have a Bulldogs site, it almost goes without saying that Bulldogs fans are very likely Colts fans as well. So, to them and to you I say that I was the only one to have Butler in the Final Four pool I participate in yearly. I told people three weeks ago that if Butler got to the Final Four, they would win it. The home crowd advantage would give them a significant edge.

Michigan State plays in Lansing, not Detroit. And people in Detroit right now don't give a crap about basketball. Indiana IS basketball. Remember how the Indianapolis home crowd affected the football teams in the playoffs? Remember how loud Market Square Arena and the Hoosier Dome got? Remember how deafening Conseco Fieldhouse would get when it was Pacers v. Knicks? That's how the Luke will be next weekend. The kids playing for the other side will enter a hostile arena the likes of which they have never experienced before. 70,000 fans will be there cheering for Butler. Bring ear plugs.

One more thing: Butler being in the Final Four is the beauty of college basketball. The powerhouse schools entering this tournament (Kentucky, Kansas, and Syracuse) are all out because they weren't good enough. Their talent and their recruiting edge was not enough to overcome teams like Butler because the Bulldogs were the better team. College basketball is truly a "team" game. Also, while the shipwreck that is the NBA allows "Best of Seven" series that often suck the life out of any playoff drama, one-and-done is how the NFL and the NCAA College Basketball tournaments work. Is it any coincidence that both are the most heavily watched sports in America? No, of course not.

It's a great morning for Indiana sports. Hell, it feels like gameday! Hope you are excited about all this as I am.