Corner isnt a huge issue, but its one of those positions where you can never have enough depth. It appears as if the Colts have there three starters in place with Powers, Hayden, and Lacey, but there isnt much behind them. With the Release of Marlin Jackson and Tim Jennings, depth is required to account for possible injuries and to run dime formations. Virginia's Chris Cook seems to fit the bill as to what the Colts are looking for in a corner. 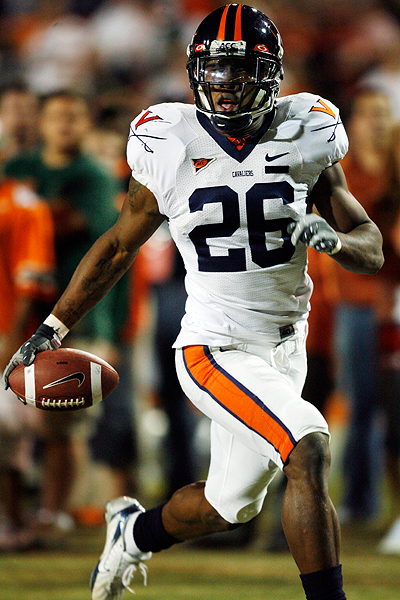 Like Devin McCourty, Cook screams "scheme fit". He is a tall corner (6'2) with perhaps not great speed, but pretty decent speed (4.48 40). He is better in zone coverage then man, but is physical enough and willing enough to do so. Unlike most of the top corners coming out in the Draft, he doesnt appear to have many of the character flaws and inconsistencies that his counterparts, like Patrick Robinson, appear to exhibit. His career statistics show that he has produced decent numbers. Here are what the scouts have to say.

Cook has outstanding height, good bulk and terrific overall size for a defensive back. Is a durable player. Exhibits the toughness needed to be physical in press coverage and run support. Very competitive defender. Has the versatility to play as a cover-2 corner or safety. Shows good instincts when playing zone coverage. Has been productive in college.

Cook only possesses average speed and probably isn’t suited to play on an island. Does not have the necessary lateral quickness to shadow sharp route runners at the next level and likely won’t be overly effective in man-heavy coverage schemes.

Mocking the Draft (Ranking description only)

Cook was one of the most consistent players at Senior Bowl practices this year and is a physical intimidator. He'll likely move to safety at the next level, but he could be the type of big cornerback a team would like.

Read & React: A step slow reacting to the play if he doesn't see it coming. Keeps his head on a swivel and will sneak a peek at the quarterback. Isn't able to generate the quick burst to close on the ball -- has long legs and only marginal foot quickness. Allows too many easy receptions. Does not possess the second gear to catch up when beaten vertically.

Man Coverage: Good hands for press coverage. Provides a stout initial pop and has the flexibility to turn and run with receivers. Strong, active hands to keep the receiver close throughout the early route. Doesn't have the flexibility and quick feet to mirror receivers, but is faster than he looks and is able to cheat back to the ball.

Zone Coverage: High backpedal, but has a smooth enough swivel to change direction. Good vision and route recognition for zone coverage. Reads the passer to make up for his lack of preferred burst.

Closing/Recovery: Has only marginal burst to make up ground quickly, though he does have at least moderate straight-line speed. Locates the ball and takes proper angles. Quick hands and good hand-eye coordination to knock away passes. Good size, body control and timing to compete for jump balls. Good ball skills. Best when facing the quarterback and some will grade him as a potential safety.

Run Support: Good size and strength to fight through blocks and make tackles in run support, but has to show more consistency. Doesn't use his hands well enough to disengage and prefers to elude blocks. Questionable toughness for the transition to safety.

Tackling: Generally reliable drag-down tackler. Good strength and long arms for the wrap-up stop. Isn't the physical defender his size would indicate. Too often is the nail, rather than the hammer, catching the ballcarrier and hanging on rather than driving through the ballcarrier. Lowers his head, which can lead to missed tackles. Good hustle downfield.

Intangibles: Twice suspended for academics while at Virginia, missing the 2008 Gator Bowl at the end of the 2007 season and the entire 2008 season. Considered leaving early for the NFL draft, but instead returned and emerged as a team leader in 2009. Voted a team captain in '09.

Along with Cook's coverage skills, he possess what most corners seem to be lacking now a days; support in the running game. With sure tackling, great zone cover skills, decent man skills,  to go along with a high competitive attitude Cook looks to fit what the Colts are looking for in a corner. Add his freakish height at the position and it will be tough to pass up on this kid if he is available in the mid to late rounds.