Share All sharing options for: Fat turd LenDale White wants out of Tennessee

One of our favorite pastime's here at Stampede Blue is making fun of the fat, useless sack of whale blubber that is LenDale White. From the moment he stepped off the plane in Nashville after being drafted in the second round of the 2006 NFL Draft (drafted ahead of Maurice Jones-Drew, Bernard Pollard, and Marcus McNeill I might add), White has been a bust. When he's not showing up to camp overweight he's instead needlessly taunting opposing fans despite the fact LenDale ain't won a damned thing in his entire, pathetic professional football existence.

With the emergence of Chris Johnson as the best back in football, it goes without saying that LenDale White is now a back-up. LenDale doesn't like that. This is why LenDale is DEMANDING he get more carries in 2010 or he wants to be traded.

LenDale White has a career rushing average of 3.5 a carry. His best season rushing the ball, in terms of average yards per rush, was his rookie year (4.0 a carry). Behind the exact same offensive line in 2009, Chris Johnson averaged 5.6 a carry while third string back Javon Ringer averaged 6 yards a carry.

And while I am sure some Titans fans will crawl in here and start defending LenDale, or perhaps they'll complain about me offering my opinions about their douchebag player, the reality is there is no defending LenDale's recent ultimatum unless you want to look like a total schmuck. This incident is yet another facepalm moment for LenDale who clearly has not lived up to expectations in Tennessee no matter what Titans fans think, say, or do. They can either choose to accept the fact that he stinks (and says a lot of stupid things to highlight just how much he stinks), or they can continue living in a fantasy world where LenDale White deserves to take carries away from Chris Johnson.

It is our preference that LenDale stay in Tennessee for reasons that, at this point, seem fairly obvious: He sucks, and thus helps the Colts consistently beat the Titans, and he provides us Colts fans with endless entertainment with his boneheaded, illogical antics. However, if the Titans do decide to come to their senses and face the truth about the bust that is LenDale White, a perfect destination for him would be the Oakland Raiders. There, LenDale could mingle with other players of equal girth and mental inadequacy. 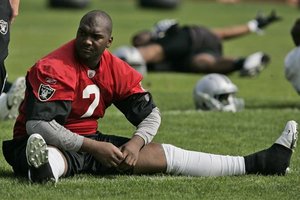