Who The Hell Will They Draft 2010? USC OT, Charles Brown

Share All sharing options for: Who The Hell Will They Draft 2010? USC OT, Charles Brown

Anyone who doesn't think left tackle is the biggest need for the Colts is insane.  If the Colts don't come out of this draft with a future left tackle, then something went wrong.  Ever since the college football season ended, I've had my eye on one Mr. Charles Brown.  Sure, he goes to USC, a school I hate more than anything else in the world, but his greatness can overcome my hate for his ugly jersey and helmet.
Charles Brown is a converted tight end who switched to offensive tackle after he was redshirted as a freshman.  In his first two years of action, he played 21 games as a backup and special teamer and one as the starting right tackle in a game against Idaho.  After current Falcons LT Sam Baker graduated, Charles Brown took over the starting left tackle job.
In his two years as starter, he took on star defensive linemen such as Tyson Alualu, and Cameron Heyward and had success.  In the competitive Pac-10, Brown was the cornerstone of the offense.  Freshman Matt Barkley threw for 2,735 yards and 15 touchdowns in 12 games and the Trojans running backs averaged 4.5 yards per carry with Brown blocking.  Fortunately, USC was disappointing last year, but it did not stop Charles Brown from shining. 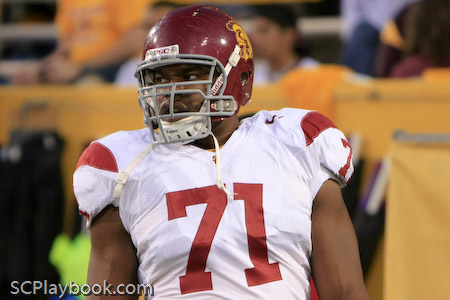 After the jump there are scouting reports and a video of hopefully future Colt Charles Brown.

Pass blocking is Brown's best area. He has very good lateral movement to slide into protection with ease. When Brown keeps his feet moving against edge rushers, he can continue to work them around the edge and push them out the play...A lack of great strength leads to some struggles in run blocking. Brown doesn't sustain his blocks long enough and needs to become more physical. Bull rushers can push him back and get after the ball carrier. Gets to the second level nicely and can neutralize defenders on the move...Can extend his arms to push defenders out of the play. Has plenty of room to add bulk. Could probably put on 20 pounds without it negatively effecting his play...His power is only adequate, and this hurts him in the run game. Additionally, his initial punch is inconsistent...Showed improved footwork as a senior, but still needs to improve his stance. Will too often not keep a wide base, which negates his leverage.

Pass blocking: Lanky build with plenty of room for additional growth. Long arms and shows good quickness off the snap. Shuffles back in pass protection with bent knees, ready to slide inside or out to mirror the defender. Significantly improved his upper-body strength as a senior, using a more effective punch to stun the pass rusher. Gives good effort, and showed improved upper-body strength to sustain blocks. Can become fundamentally lazy...Only marginal using leverage and leg drive as a short-area run blocker. Shows an explosive burst to make the reach block or cut block when sealing the edge...Shows good quickness off the snap for combo blocks. Gets his hands into defenders and is agile enough to release and get to the second level...Good initial quickness and depth in his kick slide in pass protection and when attacking the defender in the running game...Good quickness downfield as a run blocker. Can get to the second level and adjusts nicely to the moving target. Flashes some nastiness with an explosive shove to knock the defender off the ball. Shows good effort to sustain blocks and will hustle downfield.

Pro Draft Party Video (Brown goes from the start until 1:07)

Brown is a prototypical pass blocking left tackle.  His technique is near flawless and amazing for coming out of college.  He weighed in at over 300 pounds at the Combine, so his size is less of a question.  He made up for any size difference in college by using his technique to dominate the opponents.  He should be easy to coach with his work ethic and already great fundamentals.  If he can get stronger and become a better run blocker, he should be a superstar.

If the Colts took Charles Brown, I don't see a situation where he isn't starting immediately.  I think he is already a better left tackle than Charlie Johnson, and he could be the next big thing at offensive lineman.  The Colts would probably move Charlie Johnson to right guard for 2010 and have him groomed to take over for Ryan Diem at right tackle.  If the Colts take Brown, they will improve two positions, not just one.

The main challengers for Brown being available at pick number 31 are the Seattle Seahawks, Green Bay Packers, and Arizona Cardinals.  All three teams need a left tackle badly, and his former coach Pete Carroll now runs things in Seattle.  Green Bay likes the small linemen, and Arizona needs someone to protect Matt Leinart.  I'd say there is a slight chance Brown falls, and if he is there I would see Polian being very interested.

I'm not going to say Brown will be the next Walter Jones, but if the Colts take him, don't expect the left tackle position to be a problem for a while.  Brown will be a great offensive tackle wherever he goes.