We Takin' Over! Colts Fan From Now On!

Share All sharing options for: We Takin' Over! Colts Fan From Now On!

I’ve decided to convert! After years of futility up here in New England, I’ve decided to switch my fanship from the Dark Side to the Light! The fellows at SBNation were kind enough to see my value as a writer and believed that I was good enough of a contributor to immediately gain editorship at Stampede Blue. I’m tried of Gisele Brady, Randy Sloth and Vince Will-never-put-down-the-fork. They’re all past their prime and can no longer bring victories to the Razor up in .

I think I should be able to pick up Colts fandome pretty quickly. There shouldn’t be much of a change in team styles- a coach without emotion, a high flying offense and a defense that tries so hard but just can’t get it right. I’ve been reading Suzy Kolber so I know all the in and outs of the Colts franchise! I know that Bill Poland is the greatest GM in the game. I know that Jeff Sunday has held down one of the most efficient pass blocking offensive lines this decade. I know that Lil’ has done a pretty great job at wide receiver since taking over for Marvin Gaye. And of course, who could forget the 4 time MVP of the league (although apparently his most recent MVP award should have gone to the guy who is going to finish second to Usain Bolt?). 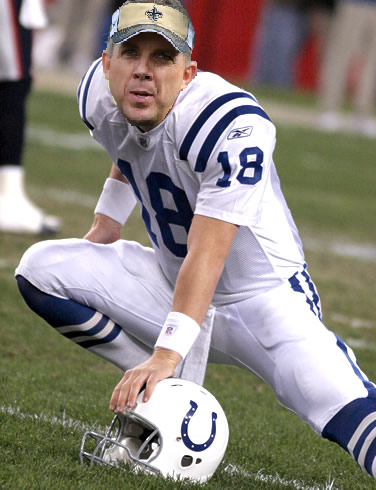 I’m excited to follow some of the greatest players in the game! So here’s to a great upcoming draft, off-season and regular season! Let’s bring a Super Bowl to the Oil Drum!