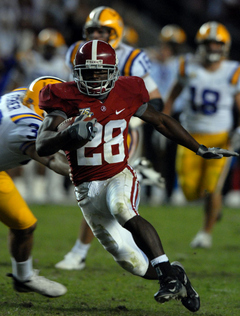 There is only ten day's left before the start of the 2010 NFL Dreft (and another 6 days till my Birthday, so start thinking about what you wanna get me, lol). Continuing the theme or return specialists I started, we turn our attention over to the defensive side of the ball. Taking a DB with return skills kills two birds with one stone. The first being the lack of depth in our secondary and the other being the need for a return specialist. Javier Arenas has both of those traits and his skills seem to be a great fit for the Colts

Arenas maybe slightly undersized (5'9, 197 lbs) but he is no Tim Jennings. For one, he doesnt play off coverage giving receivers a large cushion to work with. In fact, many scouts say that Arenas is adept to play any style of defense from off man, press man, short zone, and deep zone. What Arenas lacks in deep speed, he makes up for with great instincts and intelligence to make plays on the ball when the opportunity arises. At Alabama, he wasn't terribly productive, only posting up 2 career int's. but this was mainly due to his poor ball skills as he broke up far more passes (16).

Arenas' true value comes in the return game. During his four years, he returned a total of 7 punt returns for TD's with a return average of 14.2 yards a punt. He wasnt that bad of a kick returner either, as he averaged 24.1 yards per return.

Man coverage: A lack of great speed is what hurts Arenas here, even more so than his height. Fast receivers can beat him deep and needs safety help over the top. Shows a good jam at the line and likes to get physical in man coverage. Knows how to properly use his hands to re-route receivers.

Zone coverage: Because Arenas has such good instincts, he is always a threat in zone coverage. Almost always gets himself in good position to break on the ball because of his anticipation skills.

Tackling: Is an above-average tackler in the open field. Sinks his hips nicely and runs through opponents. Can be an intimidating hitter when he wants.

Ball Skills: Moderately underrated in this area because of his low interception numbers. But Arenas shows in his return abilities that he has good hands. Muffing a kick was a rarity and Arenas showed good ball placement on returns.

Good anticipatory skills. Reads the action and breaks on the ball quickly. Can be beaten with good play-action fakes. Lacks the deep speed to recover and has to be protected over the top by a safety. Flashes an aggressive pop at the line of scrimmage when in man coverage. Good lateral agility to turn and run with receivers. More quick than fast, and can be beaten over the top if left alone in man coverage. Alert and active defender when in zone. Reads the action quickly and gets a good break on the ball, especially on short and intermediate routes. Disciplined defender and reliable tackler. Aggressive fighting through blocks to come up in run support. Highly active defender and an effective open-field tackler. Secure open-field tackler who breaks down in space against shifty athletes. Not a big hitter, but wraps his arms around his target with good drive for a player his size. Struggles some against bigger receivers, but has good strength to drag them down quickly.

Like most defensive backs who receive extensive playing time from Nick Saban, Arenas has outstanding instincts and intelligence. Despite being a smaller corner, he plays with great toughness. His quickness and burst allow him to jump shorter routes and come up fast in run support. Has been a highly-productive player in Tuscaloosa. Arenas is also an excellent special team’s contributor.

Arenas lacks height and could have trouble covering taller, wide catch-radius receivers. He’s a raw technician, which was masked a bit in college due to his instincts. Will need to improve this area when matched up against savvy NFL vets. Only possesses average ball skills and drops some catchable interceptions. Fully-developed physically and has likely maxed out his potential.

Only thing that has me a little confused is why NFL.com calls him raw on his technique when other outlets say he is very disciplined and understands his assignments. Regardless, Arenas has displayed the skills to be an excellent corner within the Colts system and brings added value in the return game, the Colts so desperately need in their special teams.