ESPN's all-1st round QB pick: the height of lazy sportswriting

Share All sharing options for: ESPN's all-1st round QB pick: the height of lazy sportswriting

Leading up to the draft ESPN has been running a series looking at the best players at each position to come from each round of the draft. Today it culminated with the all-1st round pick team. That 18to88 ran the link as "ESPN goes insane" should let you know where this is going. Their choice for the best QB to ever be taken in the 1st round was fairly called 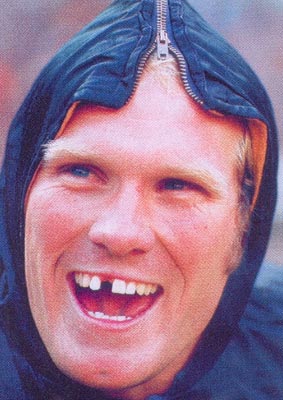 So how does ESPN defend in "indefensible" pick Terry Bradshaw as the best QB ever taken in the 1st round?

How can we select just one quarterback from among the likes of Troy Aikman (1989, Dallas Cowboys), Bob Griese (1967, Miami Dolphins) and Peyton Manning (1998, Indianapolis Colts)?
We tab the first-round draftee quarterback with four Super Bowl rings -- Terry Bradshaw (1970, Pittsburgh Steelers) -- and we rest our case.
But based on that logic, why wouldn't Paul Hornung (1957, Green Bay Packers) and Franco Harris (1972, Pittsburgh Steelers) be automatic starters behind Bradshaw, since both Hornung and Harris boast four NFL titles each? We're just promoting debate here, folks, not providing empirical evidence of any player's superiority.

I'm not sure I've ever seen a lazier evaluation and defense than "The individual player with the most team championships" and "We're just promoting debate, we don't have to make any effort to support our pick." Let's follow their logic for evaluating other QBs.

-Trent Dilfer and Brad Johnson better get their HOF induction speeches ready because they are better QBs than current HOFers Warren Moon, Fran Tarkenton, Jim Kelly, Dan Marino and Dan Fouts. Look at the rings, we rest our case.

-What a lucky time we live in to have 5 QBs in the league today (Eli, Brady, Peyton, Brees, and Big Ben) who are so clearly HOF caliber QBs. Look at the rings, we rest our case.

-Kurt Warner a HOFer?  How can you even question it?  He's better than Dan Marino! Just look at the rings, we rest our case.

-If the Steelers, unhappy with Big Ben's tarnished reputation called up the Colts or Saints, they'd swap QBs with them in a heartbeat and throw some picks the Steelers way too, to even out the deal. Just look at the rings, we rest our case.

I invite the readers to continue with their own ESPN caliber QB analysis in the comments, but remember; you don't have to defend your statements. You are just promoting debate.