Who The Hell Will They Draft: Indiana (PA.) CB, Akwasi Owusu-Ansah

Share All sharing options for: Who The Hell Will They Draft: Indiana (PA.) CB, Akwasi Owusu-Ansah

With a name meaning "Born on Sunday", "The Ansah" is hands down the best named player in the draft. AOA has an elite combination of size (6' 0 1/4"  with long arms), and speed (4.47 40 at the combine, .02 off the fastest CB. 4.31 Pro Day 40). Unlike many freakish players AOA was productive in college, but at the DII level. In two years as a starter he picked off 10 passes and was often avoided by opposing offenses. As a senior he returned kickoffs for a 29.7 yard average with 2 TDs and punts for a 12.5 yard average with 3 TDs. 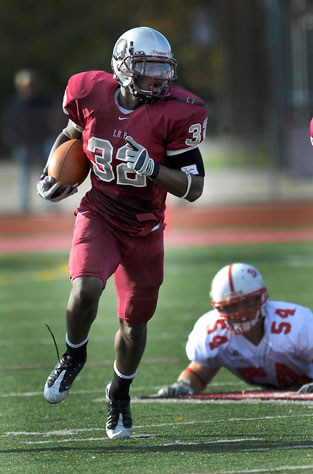 Ansah has the tools for pretty much any scheme. His size and physicality with WRs would make him an attractive press corner, but he usually played with a large cushion (I know that brings visions of Tim Jennings, but AOA excels at breaking on plays quickly, something Jennings really struggled with).

A big concern with Ansah, in addition to level of competition, are questions about his tackling since he was avoided in coverage and didn't get involved in run support much being lined up so deep. Taking Antonio Cromartie's attitude towards run support is not going to be acceptable.

A top small-school player, Owusu-Ansah is known as a physical talent who has the speed to handle cornerback duties. He lined up some at safety as a senior and could hold up there in the NFL. He has a shoulder injury that knocked him out of all-star games, which is why he is this low. Also played on special teams.

Reads his receiver carefully on the outside and is quick to jump routes once a hint is given. Reads the quarterback well and has the speed to the ball in the deep half as a safety. Baits the quarterback into thinking the seam route is open.

Could flourish in a zone system as a free safety or corner. His size and speed give him good range, and he is strong enough to snatch the ball from the grasp of receivers. Fluid moving from the hash to the sideline. Excellent hands for the interception and is always a threat to take the ball to the end zone. Must prove he has the discipline to come off one receiver to cover another coming into his area.

Has the size and strength to limit yards after the catch. Has long, well-built arms to wrap up ballcarriers. Averaged roughly on tackle per game -- the ball didn't come his way often and he was not involved in many run plays. Heads toward the pile but often runs around it instead of entering the fracas. Needs to prove himself a secure tackler before teams consider moving him to safety.

Owusu-Ansah has tremendous size for a corner and long arms which allow him to play even taller than his listed height. Has impressive ball skills, enhanced by his height/long arms, and can high point the football to come down with a tough interception.

Played against more inferior competition (Division II) than other prospects and was allowed to get by on his physical ability. Owusu-Ansah can be undisciplined at times with his techniques -- something he will have a much harder time getting away with at the next level. Dealt with shoulder injury in college.

Ansah is expected to go from the mid 2nd to the late 3rd, but it wouldn't be a shock if some team fell in love with his speed/size combo and snatched him up before much of the 2nd round has passed. Indy and Ansah seem to be a fit. Ansah can provide CB depth with massive upside as well as return skills and Indy has a system that fits Ansah's skills and lineup that should allow him time to learn.